That's a no-brainer--Republicans, of course. Who else would oppose updating the safeguards against working more than 40 hours without overtime pay, part of the New Deal that President Roosevelt called the most important piece of New Deal legislation since the Social Security Act of 1935?

(Republican) Lawmakers in the House and Senate this week introduced the Protecting Workplace Advancement and Opportunity Act, legislation that will ensure the Department of Labor pursues a balanced and responsible approach to updating federal overtime rules, according to their press release. The sponsors of the legislation--members of the House Committee on Education and the Workforce and the Senate Committee on Health, Education, Labor, and Pensions--released the following statements upon introduction:

""In the 21st century workplace, we need to encourage policies that increase flexibility, reduce regulatory burdens, and create more opportunities for workers to pursue their dreams. Our nation's outdated overtime rules are in need of modernization, but it must be done in a responsible way that doesn't stifle opportunities for working families to get ahead. Unfortunately, the administration's overtime proposal fails this test and should be sent back to the drawing board," said House Subcommittee on Workforce Protections Chairman Tim Walberg (R-MI).

Sure, this when corporate profits have doubled from 6 percent of gross domestic product to 12 percent and more over the last 30 years, while wages have fallen by almost exactly the same percentage amount, said former Labor Secretary Robert Reich in a recent New York Times Oped.

This is Repub's reaction to the Labor Department's proposal for new overtime rules that are expected to be introduced this summer, in other words--rules that require no congressional approval. 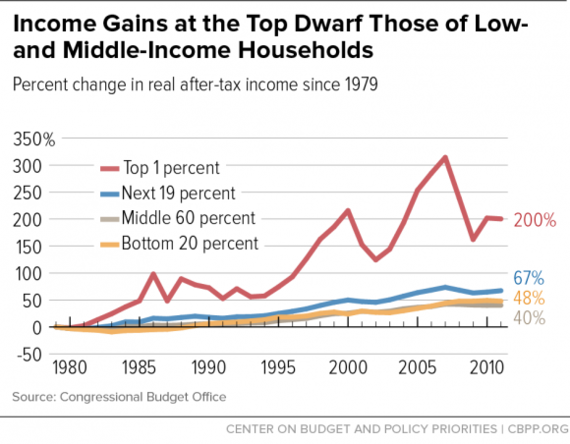 According to the Economic Policy Institute, says Professor Reich, it would give 13.5 million more workers a new or stronger right to overtime pay -- substantially increasing both middle-class incomes and employment. "It's not as high as the $69,000 threshold it would take to return to 1975 levels, after adjusting for inflation, but it's a courageous step in the right direction. It's like a minimum wage hike for the middle class," said Reich.

And opposing any boost to the minimum wage is of course the real target of Republicans. But minimum wages are rising, anyway. California, New York, and several cities have already enacted a $15 per hour minimum wage to be phased in over several years.

This tells us just how out of the mainstream are Republican lawmakers that have little, if any, interest in bettering living conditions of 80 percent of the workforce that are wage and salary earners.