I came across this chart from an article at Global Economic Intersection (where I am also a sometimes contributor): 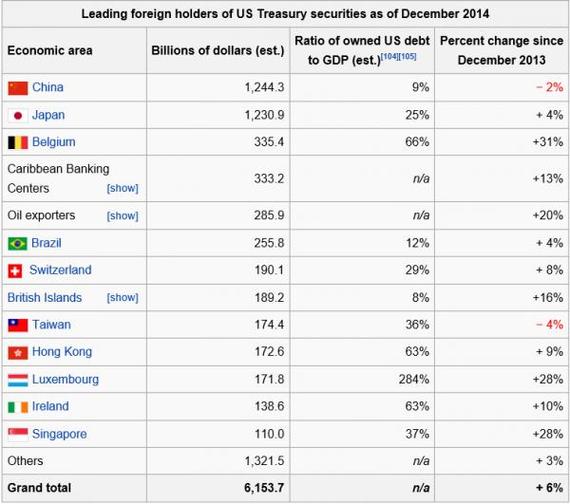 According to statistics from U.S. Treasury Department, China cut U.S. treasury holdings in 2014 by $25.8 billion. Despite all this, China remains US biggest foreign creditor.
(image by Global Economic Intersection)

A couple of things stand out:

1. China and Japan are by far the largest owners of U.S. Treasury debt. Both benefit from their currency being weakened and ours being strengthened so they can sell us (relatively) cheap goods.

2. WTF is up with Belgium? Belgium is rapidly increasing its holdings of American debt, up 31 percent in just a year. Did Belgium suddenly develop a taste for the dollar? No, according to Paul Craig Roberts:

Certainly Belgium did not have a budget surplus of $141.2 billion. Was Belgium running a trade surplus during a 3-month period equal to 29 percent of Belgium GDP?

No, Belgium's trade and current accounts are in deficit.

Did Belgium's central bank print $141.2 billion worth of euros in order to make the purchase?

No, Belgium is a member of the euro system, and its central bank cannot increase the money supply.

There is only one source. The money came from the US Federal Reserve, and the purchase was laundered through Belgium in order to hide the fact that actual Federal Reserve bond purchases during November 2013 through January 2014 were $112 billion per month.

So, the Fed is propping up purchases of treasuries to disguise lack of interest from the usual world buyers.

3. Is the same thing happening with Luxembourg? It would certainly seem so. The increase in purchasing is almost as high (28 percent) and more significantly, tiny Luxembourg now, we are supposed to believe, has 284 percent of its own GDP invested in U.S. Treasury Bonds. How can that work? How can any country afford that? Why would they even want to try? Especially a country that exports practically nothing to America and so would not gain from a depreciated currency? And anyway, Luxembourg is one of the richest countries in Europe, not a devalued currency country like deflated Greece. Where is this money coming from? Hint: you probably don't have to cross an ocean to find it, just the Potomac River.

The popular Netflix series, House of Cards, perpetuated the myth of a finite money supply with this weekend's release of Season 3. In the opening episode, newly ascendent President Underwood presents his plan to create 10 million jobs in an FDR-New Deal type jobs program (good), but proposes to pay for the half trillion dollar program by slashing Social Security, Medicare, Medicaid. The growth of entitlements, he and his staff tell an assembled body of lawmakers and advisers, will bankrupt the country and must be curtailed. I think the current percentage of spending the fictional president cites are 42 percent presently and 61 percent by 2020, which is probably pretty close to the deficit hawk values being peddled in real life these days.

Social Security does not show up in the Federal Outlay chart because it is independently funded, but the SS Administration says it is the largest part of "total budget expenditures," over 22 percent:

The conventional thinking is that this "expense" -- which is really an investment that helps the economy grow almost $2 for every $1 outlayed, because of the money multiplier effect anyway -- is paid for from a trust fund which in turn is replenished by treasuries held by that fund, as well as ongoing payroll deductions. While this is true as far as it goes, it ignores the fact that we have a fiat money system, and the government could, if it chose to, simply create the money needed in the program without taxing or borrowing anything. And, remember, this program creates wealth so it actually saves money to fund it. If we overpay seniors to the point when they start saving Social Security money and become asset investors instead, then it will be a net drain. We are very far from that now. As President Underwood explains, the average Social Security recipient gets just $32k a year. (This is probably close to the mark, but it doesn't matter for this point of discussion). That is not rentier income.

So, if President Underwood really wanted to stimulate the economy, he'd get Congress to issue new debt-free U.S. Notes to fund Social Security AND use that same kind of sovereign money to create his 10 million new jobs.

I wrote to the "president" -- aka Kevin Spacey -- and to the real-life writer and series creator, Beau Willimon last March, suggesting a plot twist to counter the debt ceiling in both real life and as a plot element in future episodes. I haven't binge-watched all the episodes yet, but it looks like this will not be an element of this season's adventures. I am past episode five, and it's not leaning that way yet.

Also, my letter bounced back address unknown, and when I sent it via the website, the site said unsolicited scripts were not accepted. So, it seems Netflix TV is as locked into the dominant, and wrong, paradigm as any regular network TV program.

Here is my letter. It's a bit over the top, but so is the show.

I am a big fan of "House of Cards" and of Kevin Spacey's character, Frank Underwood.

When then Vice President Underwood faced off with Tea Party Senator Haas, who threatened to shut down the government over the debt ceiling, he could only compromise, manipulate, strong-arm, and cajole.

As president, he has a new option, one that will effectively give President Underwood the one power over Congress that a president normally lacks -- the power of the purse.

Perhaps best of all, president Underwood could do all this while seemingly opposing the big banks, wrapping himself in the constitution, and even invoking our country's greatest president -- Lincoln.

Although little remembered today, during the Civil War, President Lincoln and Treasury Secretary Salmon P. Chase used the constitution's coinage clause (Article 1, Section 8, Clause 5) to "coin Money" (case structure in the original Constitution), specifically, the country's first Legal Tender: United States Notes. These were not dollars issued from a Central Bank (which did not exist then), but money directly issued by the U.S. Treasury -- debt-free, sovereign money. The New York City banks wanted 24-36 percent interest during the Civil War, when the North's treasury was nearly depleted. Instead of bankrupting the country, this issuance, in three installments, (1862-1863) of $450 million, was used to pay the Northern troops, and constituted 40 percent of the national budget at its peak. Its legality was later successfully upheld in a series of legal tender cases, culminating in the 8-1(!) Supreme Court decision Juilliard v. Greenman (1882) in which SCOTUS ruled that the federal government had the right to issue paper money, not just coins as it had done since 1792. This decision still stands and has never been challenged. United States notes were produced until 1971, and a few remain in circulation today. Of course, most money is in electronic form now, and United States notes could be too.

Now, here is where a president with guts comes in.

The next time Senator Haas threatens to shut down the government over the debt ceiling, the conversation might go something like this (a scene in the Oval Office):

Haas: Perhaps the American people need to see what it's like to have the government shut down for a while.

Underwood: I have something different in mind.

Underwood: All of which would re-label the Democratic Party the Tea Party and cost us the next election. No, we will spend the money necessary to pay for the programs Congress has already authorized.

Haas: But that would increase the debt past the ceiling...

Underwood: No, because we will not be borrowing the money. We will pay for previous authorizations with these (President Underwood holds up a $5 United States note). I see you are unfamiliar with our nation's money. This is a United States note and it is issued by the Treasury Department. As you know, Treasury Secretary Kern works for me.

Haas: (incredulous) You can't just have Treasury produce money on its own! Treasury has to issue bonds to the Federal Reserve, which then buys them with new dollars and--"

Underwood: These are extraordinary circumstances, thanks to your party. And I will not besmirch this office by violating my constitutional duty to pay all debts and obligations of the United States government. Perhaps you need to re-read the 14th Amendment, or even Article 6, of the Constitution? This country was founded on the principle that we pay our debts, and that was reinforced after the Civil War in the 14th amendment.

Haas: Yes, of course I agree with you that we have to pay off our debts, but you have to make some cuts first...

Underwood: (getting angry now) It is not my job to decide what bills Congress has already authorized to pay or not pay, and it is certainly not Treasury Secretary Kern's job either! We will pay our obligations! It's a requirement of the constitution.

Haas' assistant (a policy wonk): In 1862, president Lincoln still had to get Congress to authorize the production of United States notes, sir.

Underwood: And Congress never threatened to retroactively refuse to pay its bills due.

Haas: We'll challenge you on this! We'll take it to the Supreme Court!

Underwood: (smirks) Go ahead. See how far you get when I save the country from a devastating credit-destroying debt default, keep tens of thousands of government workers on their jobs, and introduce debt-free money without the use of the loathed Federal Reserve -- your Tea Party supporters ought to like that! Why don't you go ask them?

Haas: This violates the enumerated powers! It would mean... it would mean the president would have the ultimate say over spending limits.

Underwood: I'm just playing the cards I was dealt, Senator.

Meanwhile, the real life Fed buys up debt clandestinely at remote locales, and the plot thickens...