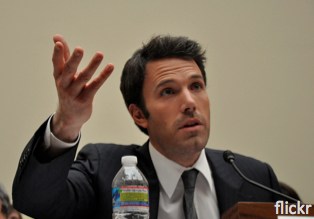 Ben Affleck is Batman. And within hours of that news the Internet exploded with the "Batfleck" issue, as Facebook newsfeeds lit up with more debate than the verdict day of a televised trial. Some expressed conviction that Argo's Affleck could pull off an older Batman while others expressed near disgust over the idea of Daredevil's Affleck defiling another superhero on-screen.

Will Affleck suck or succeed as Batman? That remains uncertain. However, one thing was made certain this week certain: We Americans care who plays Batman.

Why so serious America? Why care so much about a fictional character?

Because Batman is one of the most important and beloved fictional characters of modern times. He is the biggest superhero. He's our generation's Superman.

Think about it: he's important to comic nerds, to fans of Saturday morning cartoons, to parents, to film buffs, to preps, punks, and goths. His symbol is spread across belt buckles, coffee mugs, and T-Shirts across the States. The Bat logo is worn by nearly every type of American.

Over the last decade, an explosion of consumer research has investigated just how deeply people connect with fiction and brands. The Caped Crusader is part of what consumer psychologists call the "extended-self."

And people will defend and uplift the purity of items included in their extended self. Just look at the extreme outrage and positive enthusiasm people had over Man of Steel's "uninsipiring" departure from Superman mythology. And that was just Superman.

The Dark Knight is something more. Batman is the father figure of kids who grew up imaging themselves as his surrogate son Robin. Batman is the promising symbol of uncompromising moral principles, truth, and justice. Batman is the superhero who isn't magical: he is the relatable one. Batman is the person we all secretly fantasize we could become if we just had a good utility belt. And Batman is the hero of potentially the most beloved and acclaimed blockbuster trilogy since Star Wars.

If Affleck's Batman sucks, Affleck will take from people something valuable. The Bat Logo just won't publically have the same meaning if it gets the Daredevil treatment. It won't communicate the same feelings and ideas. So much of people's emotional and monetary investment into the Batman ideal will be lost.

Batman is part of so many Americans' selves, and Affleck threatens to poison that part or bring a more nostalgic Batman charm to it.

Will Affleck suck or succeed? Only time will tell. However, one thing is for certain: Americans will come out of the theater in July 2015 with their fists in the air either cheering happily or jeering madly. There will be no in-between with Batman.