Conductor Benjamin Zander's father served in the German army on the Russian front in World War I. For spiritual sustenance, in the trenches, he would read scores of symphonies that he could hear in his head, even if he had never heard the piece before. 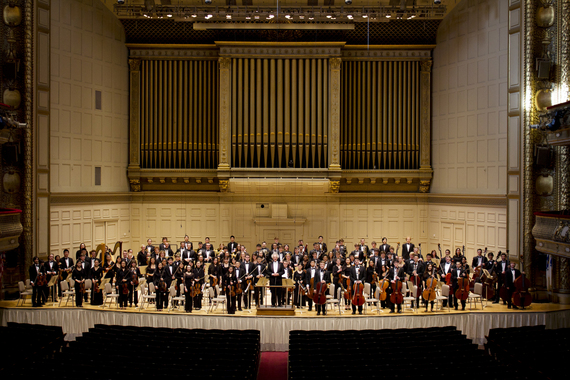 Seventy-six years young, Maestro Zander is old enough to be a paterfamilias to the musicians, who range in age from 12 to 21. Zander's influence on them, however, extends far beyond the music.

"Music is an even greater developer of character than athletics, the military, or anything else," Zander says, over tea in his lovely Cambridge, Massachusetts home, during a break from preparing for next Monday evening's concert.

"The more difficult the music, the more the young people feel inspired to rise to the occasion. There's truly nothing like it for building character."

Zander meets weekly for four hours with his charges, who will perform an extremely difficult program including Stravinsky's violin concerto, Tchaikovsky's Fifth and Debussy's La Mer. The last rehearsal did not go so well, and Zander has been up since six in the morning, writing a voluminous email of notes to his musicians.

"It's not the worst thing in the world to have a rehearsal that doesn't go perfectly," Zander says. "If anything, it will make us all bear down even more."

Zander sees his role not just as an imparter of music to the 112 young people in the BPYO. Instead, he sees his ability to interact with the young people as a chance to mentor them not just in how they play but how they think and even how they speak.

"Every week, I give them an assignment that has nothing to do with the music we're playing," Zander says. "Last week the assignment was: 'Take three giant steps.'

"Another week, it was 'Walk with Spirit and Love.' The letters I receive--sometimes as many as fifteen in a single a day--are astonishing."

A girl in New Hampshire wrote in response to "Take three giant steps" that she ended up having one of the best, most spiritual weeks of her life. The musicians are often flummoxed at first by the assignments, but find themselves digging deep inside to answer Zander's provocative questions.

Frequently, Zander involves his former wife, Rosamund, with whom he wrote an evergreen bestseller, The Art Of Possibility, to offer guidance to the young people. The youths come for the music but they end up with a resilient, redoubtable philosophy of life.

"I even encourage them to stop using the word 'like' over and over when they speak," Zander says, smiling. "It's a word that adds nothing to communication. It's as if you threw in an extra note the composer didn't write, for no reason."

Zander takes his young musicians on annual summer tours, where they play exceedingly difficult pieces, like Mahler's second symphony and Bartok's Concerto for Orchestra in the best halls in Europe, in front of extremely discerning audiences.

"My friends there were astonished," Zander recalls happily. "'Mahler 2? For kids?' My attitude is that the harder the piece, the more they will rise to the occasion. They did such a fantastic job with the Mahler that they received a twenty-minute standing ovation in the hallowed Concertgebouw in Amsterdam. This past summer they got a standing ovation in the Berlin Philharmonie. There are experiences that none of us will ever forget."

Zander says that Boston is one of the world's musical hubs, supporting two full-size orchestras--his own and the Boston Symphony Orchestra--as well as three separate, flourishing youth orchestra programs.

"We have some of the finest music schools in the world," he says, especially the New England Conservatory of Music, where he taught for more than four decades.

"The students often remain in Boston to perform and to teach, meaning that we have a new cadre of outstanding music teachers living here who are teaching the next generation of young musicians.

"Also, people in this area have a deep appreciation for and understanding of classical music, which means that they see the value in introducing their children to listen and to play. Our concerts are full of young people. That makes all the difference!"

"Don't let anybody tell you classical music is dying or irrelevant," Zander says. "It's alive and well in Boston, and thanks to these young people, it will be alive and well for a very long time."

The BPYO's upcoming concert, November 2nd, at Symphony Hall, is free, thanks to a grant from the Free For All Foundation.