The following post is the second in a two-part series on finance and global poverty. You can find Part 1 here. In Part 2 we'll be looking at the human power behind finance. 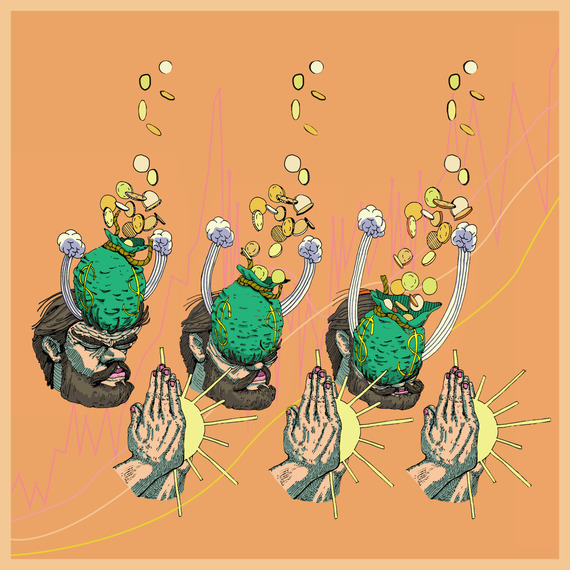 In 1996 a young Princeton anthropology graduate named Karen Ho wanted to understand the culture of Wall Street, so she became an investment banker.

She signed on to work with the investment group Bankers Trust through a college recruiting seminar and soon found herself working alongside bankers from Morgan Stanley, Merrill Lynch, Lehman Brothers, Goldman Sachs, and JP Morgan.

While interviewing her colleagues, she had an interesting realization. Both investment bankers and those who protest their actions seemed to be telling a surprisingly similar story. Activists she knew from college spoke about big banks as borderless, all-encompassing, all-powerful forces that had achieved total dominion over markets. Ho recalls that the investment banks offered nearly the same narrative:

As employees, we were constantly told how global we were, and we believed it. We didn't just have offices, we had global offices; we did not just understand markets, we had global market access and the capability to exploit all markets.

Ho realized that while social critics relied on this narrative for its simplicity and dramatic flare, investment banks used it to convince investors of their own limitless capabilities. The difference was that bankers knew it was just a story.

In her interviews, Ho found that executives at the world's top investment banks were actually very insecure about their reputations as "global" powers. When she asked for details about an institution's involvement in certain countries, it often turned out that their presence consisted of no more than a fax machine in an empty office, rented mostly to maintain "a particular global image."

While the bankers worked hard to keep up this image, Ho saw that their true power was derived from individual relationships:

Ho discovered that though the world's largest financial institutions formally assigned "agency and responsibility to the market," their real power came from social networks and a strong public reputation. In short, our financial systems depend on us.

In theory, we all agree that our financial systems are human-made, but in practice, it's a little more complicated. We tend to feel that our financial and economic systems have grown powerful beyond our control. We've lost faith in our own ability to effect change, and a sort of hopeless cynicism has crept into its place. It's true that the inequalities of our financial systems are drastic, but as Karen Ho learned, a completely fatalistic outlook not only is inaccurate but ultimately supports those at the top.

We have to remember that the same banks responsible for so much of the financial strife, confusion, and crisis that we discussed in Part 1 are guided by social forces.

The same also holds true for our public financial institutions. While studying the International Monetary Fund's tech systems, Microsoft's head researcher, Richard Harper, accompanied accountants on an IMF "mission" to an unnamed developing nation. He found their processes for agreeing on statistics and lending conditions to be "bound up with and immersed in social practice" and was concerned that "though the raw material of those processes may be wholly mundane, agreeing to count them may make them seem sacred."

This persistent misunderstanding of financial systems as somehow sacred has become a broader part of our culture.

In Part 1 of this series, we remembered the medieval clergymen who used their religious power to acquire wealth. The current head of the Catholic Church, Pope Francis, may have been thinking of this unfortunate history when he recently spoke out against policies that treat our financial and economic systems as sacred:

Some people continue to defend trickle-down theories which assume that economic growth, encouraged by a free market, will inevitably succeed in bringing about greater justice and inclusiveness in the world. This opinion, which has never been confirmed by the facts, expresses a crude and naïve trust in the goodness of those wielding economic power and in the sacralized workings of the prevailing economic system.... We end up being incapable of feeling compassion at the outcry of the poor, weeping for other people's pain, and feeling a need to help them, as though all this were someone else's responsibility and not our own.

When we believe our financial systems are beyond our control, we neglect our responsibility to those most impacted by its flaws.

So let's get back to the question posed in Part 1: Are dreams of reform -- like Podemos' guaranteed income -- a possibility? In strictly economic terms, yes. A recent University of Barcelona study on basic income for Catalonia found it to be "not only desirable but also feasible."

What matters is political will.

In the past, with enough public support, even dreams of massive debt cancellation from organizations like Rolling Jubilee and the Committee for the Abolition of Third World Debt have been realized.

For instance, Rolling Jubilee's dream of debt forgiveness is based on the historical concept of Jubilee. In the recurring cultural practice recognized by several religions and ancient civilizations, all debts were cancelled in a beautiful acknowledgement of the sacredness of life over the power of money.

Thou Shalt Not Exclude

We began this two-part series with the story of medieval illiteracy and inequality. But literacy in itself did not end the massive inequalities of the Middle Ages. It was simply a tool that enabled commoners to see through a sacred façade and recognize the truly human foundations of the ruling class.

Today we need to recognize the same. The financial systems that support the few and powerful are not set in stone. Persistent inequality is not a naturally occurring phenomenon, not a sacred order, but a human invention.

As Pope Francis suggests, we can build financial and economic systems that will ensure rather than endanger human rights:

Just as the commandment "Thou shalt not kill" sets a clear limit in order to safeguard the value of human life, today we also have to say "thou shalt not" to an economy of exclusion and inequality. Such an economy kills.

If we refuse to let the complexities of finance complicate basic human rights, if we recognize that all financial institutions and economic systems are deeply human, maybe we can recognize what is truly sacred: our responsibility to take care of one another.

Nathan Albright is the Community Discourse Coordinator at Nourish International.