Republicans are just beginning to consider their choices for 2016. Women see Hillary as representing the future rather than the past. And uncertainty and misconceptions about Common Core standards are widespread. This is HuffPollster for Thursday, February 19, 2015.

WHO WOULD YOU CONSIDER IN 2016? - Sarah Dutton, Jennifer De Pinto, Anthony Salvanto, and Fred Backus: "With less than a year to go before the first contests of the 2016 presidential election are underway, the latest CBS News Poll asked Americans which candidates they would consider supporting for their party's nomination. Among the potentially crowded Republican field, self-identified Republicans are most likely to say they would consider voting for Jeb Bush (49 percent) and Mike Huckabee (46 percent) for the GOP nomination. These political figures also appear to be the best known of the potential candidates....At this point, there is little enthusiasm for Chris Christie. Forty-three percent of Republicans would not consider supporting Christie for the Republican nomination for President - the highest of any Republican figure asked about, while 28 percent would consider backing him...Republicans nationwide are divided on Rand Paul at this early stage: 30 percent of Republicans would support him, but 31 percent would not." [CBS] 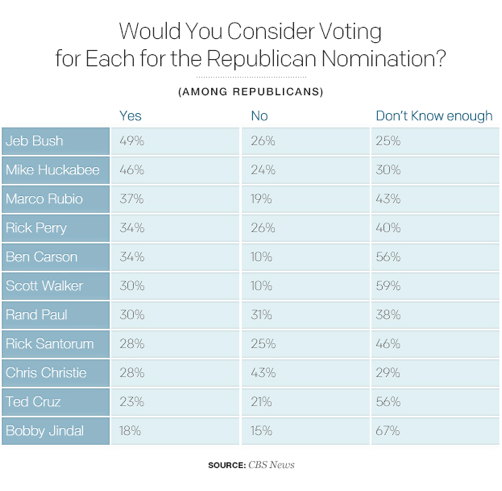 WHO REPRESENTS THE FUTURE? - Jennifer Agiesta: "Who among the nascent field of 2016 contenders represents the future? For half of Americans, it's Hillary Clinton. Asked in a new CNN/ORC poll whether seven possible candidates better represent the future or the past, 50% said Clinton evoked the future, more than said so of any other candidate. By contrast, Joe Biden and Jeb Bush, whose names have been in the political conversation even longer than Clinton's, were each seen as representing the past by 64% of Americans....Overall, across the field of seven, just two were deemed more "future" than "past," and both were women: Clinton (50% future, 48% past) and Massachusetts Sen. Elizabeth Warren (46% future, 37% past)....Both Clinton and Warren prompt significant gender gaps, with women more likely than men to call each a representation of the future. Among men, 53% see Clinton as a representation of the past, while 55% of women see her representing the future. On Warren, women see her as more future than past by a 50% to 32% margin, while men split evenly, 43% on each side." [CNN] 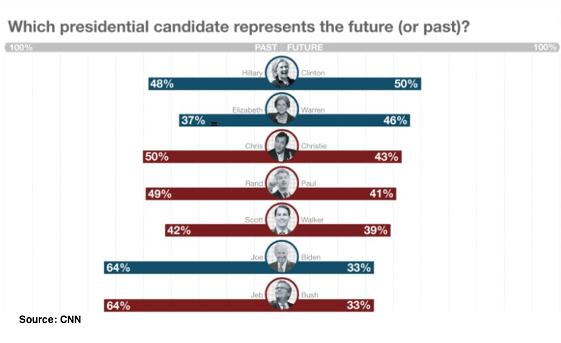 SWING STATE VOTERS WANT THE NEXT PRESIDENT TO CHANGE DIRECTION- Quinnipiac: "Voters in three critical swing states, Colorado, Iowa and Virginia, disapprove by margins of 9 percentage points of the job President Barack Obama is doing…By even bigger margins, voters want the next president to change directions from President Obama's policies...Voters support by wide margins, Obama's proposal to increase taxes on higher income earners to reduce taxes on the middle class. By smaller margins, voters in each state oppose the president's proposal to provide free community college tuition….'[W]hile voters in all three states say their state economy is excellent or good, and many say their personal financial situation is improving, more think Obama's policies have hurt rather than helped the economy'... 'There is strong agreement - by more than 2-1 in these states - on the need to ban from public schools children who have not been vaccinated against childhood diseases such as measles.'" [Quinnipiac]

-Fifty-two percent of Americans say Brian Williams should be allowed return to the NBC Nightly News; 40 percent say he should not. [CNN]

-The evening network news shows retain a bigger audience than all other sources of national news, Lynn Vavreck reports. [NYT]

-Bostonians are unhappy about the performance of the T and the rest of their public transit system. [WBUR]

-Ron Brownstein presents two tables that summarize how demographic change is remaking the 2016 landscape in the swing states. [National Journal]

-Alan Abramowitz argues that outside spending on 2014 Senate races was overrated. [Sabato]

HUFFPOLLSTER: Who Represents The Future In 2016?
Awkward Mitt Romney

1 / 21
NASCAR Friends
At the Daytona 500 race, Mitt Romney's <a href="https://www.huffpost.com/entry/mitt-romney-nascar-team-owners_n_1303029" target="_hplink">attempt to connect with voters went awry</a> when he admitted that he didn't follow racing as closely as "some of the most ardent fans." "But I have some friends who are NASCAR team owners," he added. At the same event, he told a group of fans wearing plastic ponchos, "I like those fancy raincoats you bought. Really sprung for the big bucks." Romney later <a href="https://www.huffpost.com/entry/mitt-romney-garbage-bag-rain-gear_n_1313499" target="_hplink">defended the comment</a>, saying, "Look, I have worn a garbage bag for rain gear myself."
AP