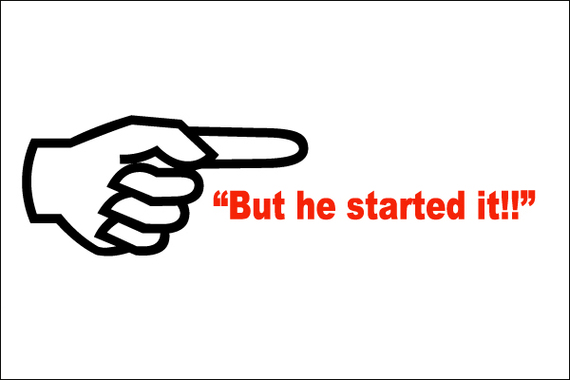 Remember back in childhood how, whenever a melee erupted on the playground or in a backyard, mothers, fathers or teachers would suddenly emerge to pull wrestling bodies apart while some sweaty kid, with pointed fingers and glaring eyes, would caterwaul, "But he started it!"? That familiar, blurted defense was intended to justify the chaos and fisticuffs, rationalize the bullying and bloody noses, and, usually, it didn't work.

Because instead of reacting as the finger-pointing child hoped, most intelligent adults would respond along the lines of (and this was my mother's favorite rejoinder): "I don't care who started it! I just want to know which one of you is going to end it?" And from there heads hung, consequences were meted, and we'd be on our way, grumbling about how unfair life was.

Yet our parents' wisdom in understanding that who "started it" was irrelevant to the goal of peace was actually a highly evolved concept pulled right from the tenets of higher consciousness thinking, philosophy that seeks to transcend our biological response to aggression and adversity. Unfortunately, the persistence of human beings to assert that who "started it" matters terribly (with results that usually are terrible), is, in fact, the flawed rationale behind why rockets are blowing up families in the Middle East and passenger planes are being shot out of the sky in service to the Ukraine/Russian skirmish. We are a world beset by tragedy and trauma motivated by the battle cry, "they started it!" and... it's killing us.

While many question who exactly shot down Malaysian Airlines Flight MH17 (according to the latest it was Russian-backed separatists), and media, social and otherwise, is aflame with heated discussions of who's more right or wrong in the Middle East, there's no end to the spectrum of finger pointing to be found. Charles Krauthammer's "Moral Clarity In Gaza" was posted on Facebook today with an assertion that it defined who, at least, "started it," but my own thought was: does that really matter at this point? Hasn't the never-ending reality of war proven that defining who "started it" has no bearing on the impact and tragedy of the escalation beyond that inception?

But we continue to go round and round, century after century, for time immemorial, ripping each other to shreds with pointed fingers, bombs and rockets, terrorism and intolerance, in support of nationalism, ethnicity and religion, defended and justified by who "started it." Seems we've not gotten much beyond our schoolyard defenses... except now the costs are so much more grave.

In response to the current state of warring humanity, l can't help but ponder an oft-asked and existential question: what is a human being? Apart from our ethnic, national, religious and sexual background, what, really, are we? If one has a religious or spiritual bent (and isn't religion most often cited for our historical attachment to war and violence?), doesn't one embrace the doctrine that every human is a spirit, has a soul, or is in some way an energy or essence that transcends the physical self? If so, doesn't it follow that, beyond life, as one transitions to whatever is next, the spirit shakes off those physical identities we hold so dear and fight for so viciously? And if that's true (and if one has spiritual belief one typically believes some measure of that is true), then it also follows that, in fact, and beyond where we landed on this planet at birth, we are all, truly and irrevocably, made of the same stuff, regardless of nationality, ethnicity or religion. If human beings -- particularly those who would kill or die for their religious or national affiliation -- instead embraced that spiritual philosophy of oneness, wouldn't peace, then, be possible?

Certainly it should be. But history tells us peace is the greatest uphill battle. Because the invisible hand of religion, national and ethnic pride, and that unfortunate human impulse to, instead of turning a cheek, push when pushed, shoot when shot at, or rush to the killing field to decimate an enemy rather than negotiate a peace, keeps our warring factions ratcheting to higher and higher levels of discord and devastation. Strange how religious tenets of harmony and oneness are never the rallying cry of those who kill in religion's name.

It doesn't really matter who started it, whichever it we're talking about. If it's one side this time, it's another the next. The anatomy of feuds, combat, war and strife depends on enflaming our differences -- nationalities, religions, ethnicities - instead of honoring our shared humanity. And until someone on one side or the other finds the humility and wisdom to not shoot back, not point fingers, and not allow ancient wounds and animosities to persistently preempt peace, the human right to pursue happiness and raise our children in health and safety will never be a reality for some in some parts of the world. And that is unacceptable.

Our parents were right... it only matters who ends it. So let's stop talking about "moral clarity," and "who's at fault this time." Just tell me who will end it. That's the only analysis I want to hear.