In these times of vast economic disparities and ecological crisis, children need examples of people throughout history who committed their lives to justice -- to bringing more equality and fairness to the world. Helen Keller, whose birthday we celebrate this month -- June 27th -- could be one of those role models. Instead, textbooks and children's literature distort her life's work, and miss key opportunities to inspire young people to make a difference in the world.

Helen Keller worked throughout her long life to achieve social justice; she was an integral part of many social movements in the 20th century. Yet today, she is remembered chiefly as a child who overcame the obstacles of being deaf and blind largely through the efforts of her teacher, Annie Sullivan. While she may be hailed as a "hero" in lesson plans for today's children, the books recount only a fraction of what makes Helen Keller heroic.

Several years ago, I investigated and wrote about the image of Helen Keller in picture books for children in an article called "The Truth About Helen Keller," published in Rethinking Schools magazine, and posted at the Zinn Education Project website. According to these picture books, Helen should be remembered for two things after she grew up: her "courage" and her "work with the blind and deaf." Of course, both are true. But none of the many books I reviewed mentioned her work as a socialist and suffragist -- movements that framed most of her life and were connected to her advocacy for people with disabilities. As Keller wrote in 1913, "The way to help the blind is to understand, correct, remove the incapacities and inequalities of our entire civilization." 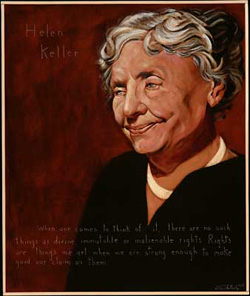 As I continue today to search for thoughtful curriculum on people who worked for social change, I returned to more recent texts and web information on Helen Keller, hoping the last decade had served to renew an interest in her true heroism. Sadly, her life -- and life's work -- continue to be distorted.

"Who was Helen Keller?" asks the jacket cover of the latest, and best-selling children's biography of Helen Keller: Who was Helen Keller? by Gare Thompson, illustrated by Nancy Harrison. In keeping with today's emphasis on standardized tests, the book presents readers with a multiple-choice format for the answer:

[ ] A woman who could not see or hear

"Find out more about the real Helen Keller in this fun and exciting illustrated biography!"

This "teaser" for the biography is an example of what historian James Loewen calls "lying by omission." Within the text itself, the distortions of her life story are even more blatant. For example, take a look at how the New York Call newspaper described one stirring moment in her life: 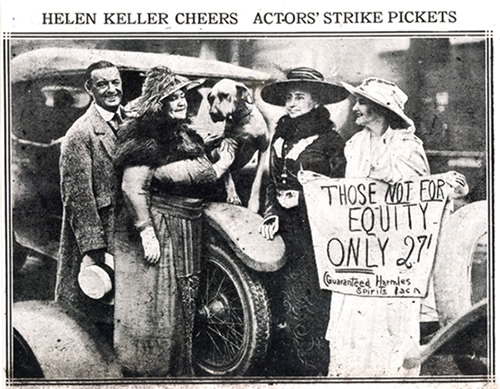 On August 18th, 1919, Helen Keller took part in a strike called by Actor's Equity -- joining the picket line against the debut of the silent film Deliverance, about her own life. Not only did she join in the picket line, she spoke at the union's strike meetings in support of their dispute with management regarding their wages. She declared she would "rather have the film fail than aid the managers in their contest with the players."

(The New York Call also was the first newspaper to publish Keller's article, "How I Became a Socialist," in 1912.)

What a lesson for young people: Here's a woman who turned her back on individual fame and glory to stand in solidarity with workers who were struggling for higher pay.

And yet here is how Gare Thomson "retells" the event:

Helen was so successful on stage that some people invited her to make a movie about her life and her feelings. Helen and Annie went to Hollywood and made the silent film Deliverance. Annie and Helen dreamed of the money they'd make from the film. They hoped to become rich and famous like movie stars. But the movie was not a success. Disappointed, Helen and Annie returned to Wrentham.

What? I'd call this flat-out lying -- and not even by omission.

Gare Thompson's stance of turning Helen Keller into a passively "courageous" woman is repeated over and over again in the resources I found on the Internet, as well -- where many educators go for curriculum. For example, Helen Keller and Annie Sullivan are listed together at the site: "The Real Heroes Club," where you can purchase "Real American Hero Trading Cards." One side features the important virtue we can learn from these heroes, COMMITMENT:

When Helen Keller was a child, she became very sick and lost her hearing and her sight. Fortunately, Anne Sullivan became Helen's teacher, and devoted herself to helping. Anne's total COMMITMENT to her student totally changed Helen's life.

And on the other side are quotes, such as "Keep your face to the sunshine and you cannot see the shadow." And the personal connection to ponder: "How can you show you are devoted to others who are very special in your life?"

If I were creating Hero trading cards for Helen Keller, I would include her passionate work for women's voting rights, and against war and corporate domination. And I'd include her courageous quotes where she asks tough and impolite questions: "Why in this land of great wealth is there great poverty?" she wrote in 1912. "Why [do] children toil in the mills while thousands of men cannot get work, why [do] women who do nothing have thousands of dollars to spend?"

Sounds to me like the mother of today's Occupy Movement.

From publishers like Scholastic Teaching Resources -- which uses her life events to "give children practice reading a timetable" by asking insipid questions such: "How can you use the first two dates to figure out Helen's age at the time she got sick?" -- to St. Aidan's Home School pages, which encourages teachers to show "the Disney version of the The Miracle Worker," the information on-line portrays the same individualistic and socially empty Helen Keller myth.

It takes a little more digging, but I encourage parents and educators to turn to resources like the small press book Helen Keller from Ocean Press's series Rebel Lives, which includes excerpts from her writings on disability and class, socialism, women, and war, or the fine young adult biography Helen Keller: Rebellious Spirit by Laurie Lawlor. It's time to share with children Helen Keller's remarkable adult life. As a defiant rebel, she could be a true hero for 21st century activists.

Ruth Shagoury teaches new and veteran teachers at Lewis & Clark College in Portland, Oregon. She collaborates with teacher-researchers who serve largely immigrant populations as they create curriculum to teach for social justice. She has been an active member of Portland Area Rethinking Schools for 15 years, and contributes to the Zinn Education Project and Rethinking Schools magazine, most recently with an article co-authored by Maika Yeigh and Andie Cunningham, "Testing What Matters Least" (Summer 2011). She has written numerous books and articles, including Living the Questions: A Guide for Teacher-Researchers (2012, with Brenda Power) and Raising Writers: Understanding and Nurturing Young Children's Writing Development (2009). Shagoury holds the Mary Stuart Rogers Chair of Education.