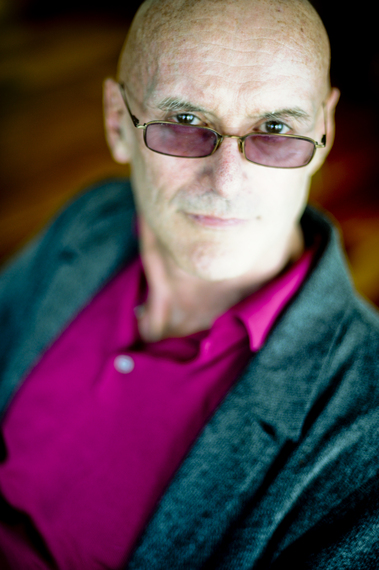 "If ordinary people don't perceive that our grand ideas are working in their lives then they can't develop the higher level of consciousness, to use a term that American philosopher Ken Wilber wrote a whole book about. He said, you know, the problem is the world needs to be more integrated, but it requires a consciousness that's way up here, and an ability to see beyond the differences among us." -- President Bill Clinton

Those who know Ken Wilber, know Ken Wilber. For example, they know that among other things, he's the most widely translated academic writer in America, with 25 books translated into some 30 foreign languages -- no small feat. However, even such an impressive accomplishment such as that didn't help sway the number of blank faces I received when gleefully telling various friends and family that I would be interviewing him in a couple of weeks. I understood those blank faces, however, as I remember having a similar expression the first time a friend eagerly told me about Ken.

It was circa mid-2000, and I was sitting in a room amongst a bunch of younger, punk/alternative type of meditation practitioners. There was a nice guy named Craig sitting next to me who started up a conversation, and we quickly hit it. I mean, nothing bonds folks like a shared interest in obscure bands, which in our case consisted of those from the late '80s/early '90s punk/hardcore scene.

After a few minutes of nerding it out over some of the bands and albums we loved, the conversation turned toward spirituality (I mean we were in a meditation/sangha setting so I suppose it was inevitable). Craig, recognizing that we both shared an eclectic interest in many of the great wisdom traditions, asked me if I'd ever read any of Ken Wilber's work, which at that point in my life, I hadn't.

Truth be told, I was still very young in my spiritual journey and found myself attracted predominately to writers with "strange names" like Krishnamurti, Thich Nhat Hanh, Ram Dass, Ramana Maharshi and so on. I actually remember thinking to myself, "What could someone with such a boring American name like Ken Wilber have to offer me?" Well, little did I know that the answer to that question was... quite a lot.

What makes Ken Wilber especially relevant in today's world is that he is the originator of an extremely comprehensive philosophy, called "Integral Theory," which includes pretty much everything under the sun: cultural studies, anthropology, systems theory, developmental psychology, biology, and spirituality to name just a few. And Integral Theory has been applied in fields as diverse as ecology, sustainability, psychotherapy, psychiatry, education, business, medicine, politics, sports, and art.

Ken himself explains the need for an Integral Approach by saying"

In our current post-modern world, we possess an abundance of methodologies and practices belonging to a multitude of fields and knowledge traditions. What is utterly lacking however, is a coherent organization, and coordination, of all these various practices, as well as their respective data-sets. What is needed is an approach that moves beyond this indiscriminate eclectic-pluralism, to an "Integral Methodological Pluralism" -- driving toward a genuine "theory of everything" that helps to enrich and deepen every field through an understanding of exactly how and where each one fits in relation to all the others. Through the Integral approach, we reveal the previously unseen possibilities for a better, more compassionate, and more sustainable future for all of us. [1]

IntegralLife.com summarizes Ken's previous words, and the Integral Approach in general, as "... the coherent organization, coordination, and harmonization of all of the relevant practices, methodologies, and experiences, available to human beings." [2]

Sound heavy? Well, it is... and it isn't. Ken has a way of relating this material so that even those with a very basic understanding of the material can grasp it. I mean, I was able to wrap my head around it (well, a good portion of it anyways) and I'm just your average indie-cultured kind of guy driven by an insatiably curious mind.

So why does someone like Ken Wilber and his integral work matter? Well, I can't help but think of Gandhi's quote "Be the change you wish to see in the world" when trying to craft my answer. Ken's integral model helps us to embrace and work with our pain and suffering, to spiritually wake up, to become more fully alive and creative, to participate in the evolution of consciousness, and to love and care for ourselves, and others, in a deeply sincere way -- and for to me, that is more than reason enough to know exactly who the hell Ken Wilber is, and to let you know in the process as well.