Not surprisingly, the record of the first humans identified by a personal name goes back to before the dawn of history itself. Through his artistic "Love Symbol", the The Artist Formerly Known as Prince gave us a clue how pre-writing names were probably rendered!

Pottery shards and other artifacts uncovered in China often bare curious symbols dating from the dawn of Chinese writing between 6600 and 6200 BC. Called Jiahu Symbols, they are not part of a written language but merely personally-invented symbols scratched on pottery to mark ownership by a specific individual: In other words a name!

The first recorded name given in an actual writing system can be found on clay tablets dating from the Jemdet Nasr period in Sumeria between 3200 and 3101 BC. 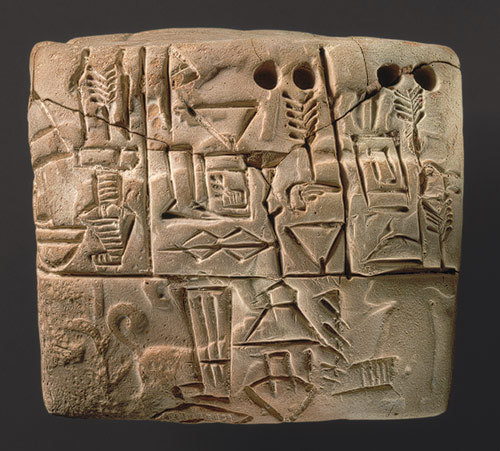 The tablets are not profound treatises on human thinking, but accounting ledgers for tallying up goods and possessions! Some of the first names are those of the slave owner Gal-Sal and his two slaves Enpap-x and Sukkalgir (3200-3100 BC). Another name is that of Turgunu Sanga (3100 BC) who seems to have been an accountant for the Turgunu family. There are many more names from this period but none that appear much before 3200 BC.

Looking to Egypt, Iry-Hor (The Mouth of Horus) would be the earliest name we know dating from about 3200 BC. Little is known about King Iry-Hor other than his name found on pottery shards in one of the oldest tombs in Abydos, though based on his burial he was a pre-dynastic King of Upper Egypt. King Ka from around this same time was the first to put his name inside a box-shaped serekh as an indicator of kingship. Following King Ka and King Iry-Hor we also have kings with hieroglyphic symbols of Crocodile King and Scorpion King followed by the name of the first pharaoh, Narmer (Catfish King), who united both Upper and Lower Egypt and together with his wife Neithhotep, lived between 3150 and 3125 BC. She, by the way, is the oldest women to be mentioned by name. The name Neithhotep means "[The Goddess] Neith is satisfied."

Example of Iry-Hor's name on a pottery shard (Credit: Wikipedia)

Other civilizations arrive at writing names much later than the Chinese, Sumerians and Egyptians, but we can still ask the same question.

Anitta (no known meaning to the name) was the king of the Hittite city of Kussara. He lived around 1700 BC and is the earliest known ruler to compose a text in the Hittite language, which is the oldest known Indo-European text.

Linear B is a syllabic script that predates the Greek alphabet by several centuries. The oldest writing dates to about 1450 BC. Some Knossos Linear B tablets mention people by name. A number of Mycenaean names have exact equivalents in Homer such as Hektor , which means "holding fast."

Following many other ancient naming traditions, even ancient Greek names have an intrinsic meaning. For example Archimedes means "master of thought", from the Greek element (archos) "master" combined with (medomai) "to think, to be mindful of". And of course nearly all ancient Egyptian names have a separate meaning such as Amun Tut Ankh whose hieroglyphic name can be directly transcribed with the words 'Amun's Image Living'. We know him more popularly as Tutankhamun.

The Mayans rose to prominence around A.D. 250. The oldest clearly named king is given by a glyph that translates into Yax Ehb' Xook which literally means "First Step Shark". He was the first king of Tikal who ruled sometime between 63 and 90 AD. Much later in 420 AD we have the purported founder of Copan, K'inich Yax K'uk' Mo whose name means "Sun-Eyed Resplendent Quetzal Macaw."

The peoples of Africa, Australia and North America all had spoken languages but not written symbolism, so until writing was imported to these areas we have no documentable record of names.

For example, among Native Americans, the oldest known name dates from the arrival of the Pilgims and their historical record-keeping. We read about Tisquantum (meaning The Wrath of God) ca 1620 AD who was a member of the Patuxet tribe.

In Africa, there are many names that have come forward in time literally by word of mouth, but no way to establish their actual dates of usage through writing. For example, the legendary Queen of Sheba (1005-955 BC) was traditionally believed to be a part of the Ethiopian dynasty established in 1370 BC by Za Besi Angabo.

Among Australian Aboriginals, writing only appeared after the arrival of Europeans in ca 1780s who transcribed language sounds into Latin text. Some of their names include Tharah, which means 'thunder' or Mokee which means 'cloudy'.

What is interesting about almost all ancient human names is that in their own languages they actually mean something. They are not sterile monikers. At a cocktail party a conversation between two ancient Egyptians would be 'Hi, my name is Living Image of Amun'...'Pleased to meet you! My name is The Beautiful One Has Come!" It would not be heard as 'Hi, my name is Tutankhamun'...'Pleased to meet you! My name is Nefertiti!"

This widespread human habit of naming people by phrases is far different than what we experience in modern times. We rarely think too much about what names like 'John Cartwright', or Mike Brown actually mean, but there are exceptions. My own Swedish name, Sten Odenwald, translates into 'Stone of Oden's Forest', and occasionally I really do think of it as more than a set of sounds or letters that designate me.

So the next time you visit Starbucks, imagine having this conversation:

You: I'd like a vente hot chocolate with whipped cream. Barista: Your Name? You: The Living Image of the Iridescent Higgs Field Barista: ?? You: Just call me Bob.