"We hold these truths to be self-evident, that all men are created equal, that they are endowed by their Creator with certain unalienable Rights, that among these are Life, Liberty, and the pursuit of Happiness."

-From the US Declaration of Independence

"...all persons have a right to income from wealth we inherit or create together. That right derives from our equality of birth." 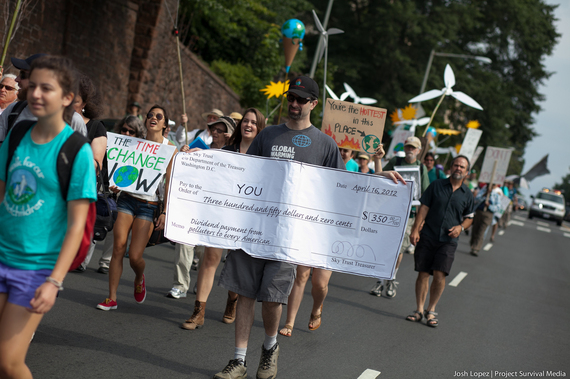 The People's Climate March, taking place in New York City on Sunday September 21, will feature thousands of people taking to the streets and calling for action on climate change from the world's leaders. The event has the potential to become a national and global turning point for the issue, but only if marchers convey a message that can resonate with the broader public. If the messaging is primarily geared to liberals who already care about the climate, they will have missed a huge opportunity to expand the movement. But they need to go beyond just calling for more government regulations, and they must appeal to people who have legitimate concerns about the economy.

There are many challenges in communicating about climate change and its best solution, a carbon price. It needs to be simple, allay economic fears, and convey universal fairness. So how can the climate marchers turn a complex carbon pricing system into a simple visual cue that offers something for everyone? By advocating returning the revenues from a carbon price back to everyone equally (aka "climate dividends").

There is a philosophy behind the dividend. It can be found in Peter Barnes' new book "With Liberty and Dividends for All." Revenues based on the value created by the scarcity of certain publicly owned resources will be distributed to everyone, equally. According to Barnes, "Over time, such dividends could rise to about $5,000 per person per year, or $20,000 per year for a household of four." That is real money, and could make a major difference in people's lives, and in the economy overall. The challenge is to convince the public that this is a real thing that can actually happen, and that is where bringing big dividend checks to New York on September 21 can make a difference.

Here are 12 types of people who, as natural supporters of climate dividends, could carry big dividend checks at the People's Climate March.

1. Alaskans already know about dividends because they have the prototype, the Alaska Permanent Fund, which has been sending annual checks to every person in the state since 1982. In their case, the money comes from oil royalties, but the reasoning behind returning the funds to everyone is the same as for the climate: it is a shared commons that belongs to everyone equally.

2. Californians began receiving a climate credit on their utility bills this past April. Every six months a new credit will appear, returning the value of raised by the climate change program back to everyone. The State is now trying to decide how to return more funds to low-income and disadvantaged communities. A climate dividend would do just that, in a way that give families the ability to decide for themselves how to spend the money.

3. Old People often live on a fixed income, such as Social Security. That could be supplemented by a climate dividend. AARP supported dividends in 2009, and it is likely they will again.

4. Young people (is the correct term these days "age challenged"?) face a host of linked problems: crushing college loan debt, an unreliable job market, financial instability, and being criticized if those things force them to move back in with their parents. A basic income from climate dividends can be a small step toward solving those problems, with ongoing societal benefits if, for example, their new financial stability allows them to choose careers such as teaching, social work, etc.

5. Middle-aged people have expenses. Child care, dealing with aging parents, owning a home or renting, trying to make ends meet. For these folks, the dividend check could act as a down payment on low-carbon products such as energy efficient home upgrades or a new hybrid/electric car, which will shrink their fossil fuel purchases and help them come out ahead as the dividend checks keep arriving.

6. People earning minimum wage have been going on strike. Compassionate zillionaire Nick Hanauer is concerned that, if inequality worsens, such people will start coming after him with pitchforks. His solution is to raise the minimum wage. That is a start, and will certainly help people at that income level. But climate dividends can go further by unifying constituencies at all income levels under the umbrella of "dividend recipient," whether they are making minimum wage or zillions.

7. People who remember Congress's failed attempt at cap and trade in 2009 may recall that bill at about 1,400 pages was full of giveaways to industry and contained loopholes such as "offsets." For more information on that bill and lessons learned see here and here . By contrast, dividends offer an approach that does not expand government, which should appeal to small-government conservatives and those libertarians willing to acknowledge the climate science.

8. People who want Congress to take action on climate change may have noticed a "cap and dividend" bill introduced recently by Congressman Chris Van Hollen (D-MD) that returns 100% of revenues raised under a declining cap back to to every U.S. resident with a valid Social Security number. Peter Barnes calls The Healthy Climate and Family Security Act of 2014 the "gold standard" for climate bills.

9. People who worry about the shrinking middle class always hear the same thing from politicians: jobs, jobs, jobs. But aside from the rare (and exciting) Tesla gigafactory, the economy is just not creating good jobs fast enough to keep up with the structural imbalances that are only getting worse (google "Piketty"). Climate dividends provide a sustainable source of income independent of the job market, and reduce stress on families who are struggling in a post-industrial information economy.

10. People who don't really care about climate change will still get a check in the mail. That may not be enough to get these busy folks to parade a dividend around Manhattan on a Sunday afternoon, but who knows?

11. People who care about global poverty such as Jeffrey Sachs, Bono, and Ban Ki-moon may be interested in how the dividend can be a step toward an international program that returns revenues to people, sometimes referred to as Cap and Share. A movement for American climate dividends could inspire other countries and influence the negotiations at the UN climate conference in Paris in December 2015.

And on a perhaps more practical note:

12. People who shop at Whole Foods Market know that organic food is great, but apparently it isn't cheap. Climate dividends will help ease the pain. But it would be disingenuous to imply that climate dividends alone will overcome so great a financial obstacle. That level of grocery bill may require additional income from the money commons and the internet commons. See Peter Barnes book for details on that.

If the People's Climate March features these 12 types of people carrying big climate dividend checks, making a splash on the evening news, and inspiring an ongoing dividends movement, will it be enough to form an unstoppable coalition to solve the climate crisis? Just to be safe, they may want to include one more group:

People who like to receive money. Know anyone who fits that bill?