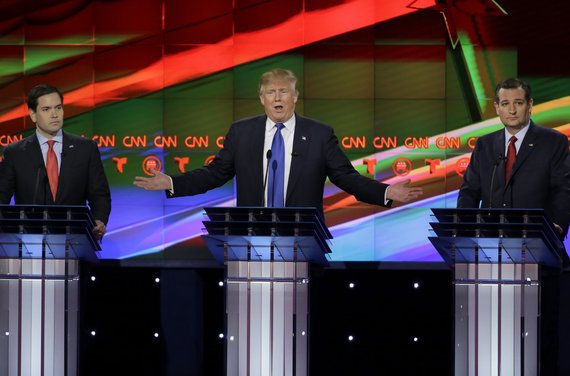 Thursday night's Republican debate reached circus levels of absurdity. Wolf Blitzer lost control. Donald Trump took over. Marco Rubio dripped in sweat. Ted Cruz looked lost at home. Ben Carson seldom spoke but produced the wittiest zinger of the night. "Can someone attack me please," he begged, in an effort to be noticed amidst the massacre.

If you've read my work, you know that I don't say this with any pleasure: Trump was the clear winner of tonight's debate. After dominating in three straight states, the nomination is Trump's to lose and tonight, he remained in control.

Kasich stood up to the immigration Nazis, contending that it's unrealistic to deport millions of people who call this country home. It's neither practical nor American. In doing so, Kasich stood out as a decent alternative to his less positive counterparts. I wouldn't be surprised at all if Trump looked to him for the VP spot.

Ben Carson had easily the funniest moment of the night when he begged to be attacked. It was a brilliant response to a debate that fed nearly every question to the frontrunner.

Wolf Blitzer looked like a small dog walker walking a large Great Dane, but to make matters worse, that Great Dane was involved in all-out warfare with a Rottweiler from Texas and Pit bull from Florida.

Ted Cruz had home-field advantage tonight, but failed to slay the Donald in Texas, where Trump is currently giving Cruz a run for his money. The two no doubt exchanged blows tonight, but Trump made contact more cleanly and more frequently.

Trump belittled Rubio for most of the night. He called Rubio a "choke artist," asserting that the Senator melted under Chris Christie's prosecution. However, Rubio had his moments. He swung back, insisting that Trump would hire illegal immigrants to build the infamous wall. The crowd went wild when Rubio stood up to Trump.

In sum, Rubio needed a bigger night than he had. There aren't many, if any states, that Rubio is projected to win, Florida included. He didn't have the breakout performance he needed to defeat Trump, and neither did the local, Ted Cruz.

*The author of this post is running a Kickstarter campaign to fund an entire series of animated rap videos about Bernie Sanders and the 2016 election.