Who intentionally set off fireworks under a blackbird roost in Beebe, Arkansas on New Year's Eve killing at least 200 birds? In some warped homage to last New Year's when at least 5,000 blackbirds perished?

Do the killers think their prank is funny or that the birds are nothing but pests?

The he-men at the Wildlife Service even shot 29 great blue herons, 820 cattle egrets and 115 white-faced ibises in 2009. It takes a real man to approach a majestic and gentle shore bird and kill it. 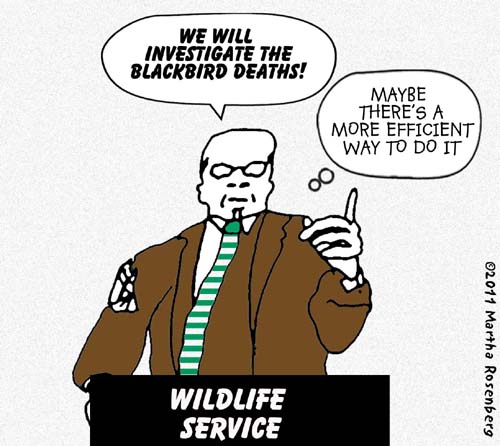 It's hard to know which is worse: government agencies like APHIS, Louisiana State University and the Louisiana Department of Agriculture and Forestry helping ranchers and rice farmers and other private landowners with our tax dollars, or the scorched earth baiting of their rice fields with poison "until blackbird populations are depleted," as LSU's Rice Research Station News puts it.

APHIS even uses caged red-winged blackbirds to decoy wild ones says Audubon magazine and "pre-baits" an area with unpoisoned food to get birds in the habit of eating. Sweet.

Nor does the government's blackbird poison only kill blackbirds.

"APHIS makes sure that the poisoned banquet is especially tempting for wildlife by laying the food out in the spring. This attracts birds and other wildlife because food sources, especially insects, are limited in early spring," says the National Audubon Society. "The poisoned rice also looks very tasty because the birds are migrating. The poisoned rice is a ready buffet for any bird to eat, but especially those who are tired and hungry from flying."

The government used the chemical DRC-1339 to poison the over million blackbirds that perished in 2009, including those in Louisiana. The avicide, called Starlicide causes "irreversible kidney and heart damage" says APHIS. "A quiet and apparent painless death normally occurs 1-3 days following ingestion," writes an APHIS spokesman on the site, secure in the fact that his death won't take three days.

Government wildlife agencies also poison entire waterways to remove "pest" fish. In 2010, Illinois wildlife officials killed 90 tons of fish in the Chicago Sanitary and Shipping Canal with chemical Rotenone (which suffocates fish) to kill any possible Asian carp that would threaten the sport fishing industry in Lake Michigan. A year earlier they killed tens of thousands of goldfish, koi, bass, crappie, catfish and sunfish/bluegill hybrids in Chicago's Lincoln Park to "renovate" the pond.

Whether killing blackbirds to help farmers or fish to help the sport fishing industry, government wildlife officials pimp our natural resources and the Public Trust Doctrine they are sworn to. Wildlife has a lot more to fear than New Year's Eve.