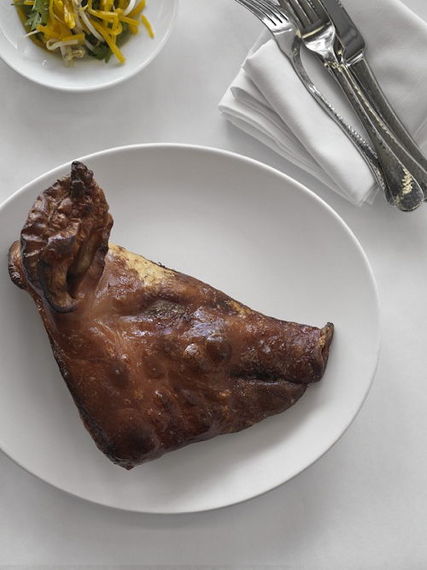 That's right, my multicultural friends: Sambal (the pride of Yogyakarta) and boudin (bonjour, bayou!) -- and the flesh is cut from that hulking skull to stuff crepes à la mu shu pork.

Eating entire porcine heads is not itself exactly new. For many centuries a roasted whole boar's head, tusks and all, was a classic English Yuletide dish. (The Hog's Head Inn in the Harry Potter series references that.) The menu for a christening feast held in a Norfolk house on January 2, 1682 included as its main course: "A whole hog's head souc'd with carrots in the mouth, and pendants in the ears, with guilded oranges."

I think "souc'd" means sauced. Or soused. Whole hogs' heads were also considered lucky New Year entrées in the American colonies. But over the last few centuries they fell out of vogue because... well, because gross. And eyes. And pointy swill-tempered teeth. Here's the Berkshire pig head carnitas served with salsa and fresh tortillas at Dallas' CBD Provisions: 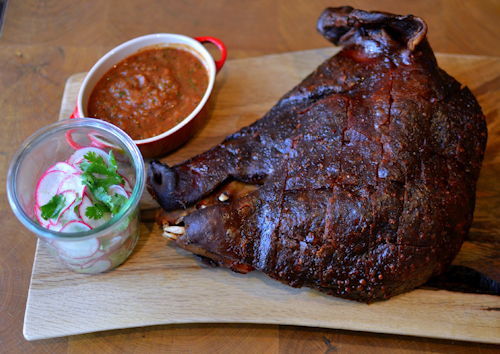 I asked CBD's executive chef Michael Sindoni whether pig heads are difficult to eat, because they sure look that way.

"The pig head has a few nooks and crannies, but for the most part it is straightforward," Sindoni told me. "We cut the skin with scissors before it goes to the table to make it easier. From there, the cheek is the easiest target, as it is the largest muscle. The meat is really tender, so really you just pull it apart with a fork. After the cheek, you have to do a little digging. There are nice morsels behind the jaw, eye, and ear. Then I would take out the tongue and that's pretty much it. Our more adventurous diners go after the snout and ear and, on occasion, the eyeball."

Oh God that last part NO. But that's just me. Plus I had to dissect a cat head in my freshman zoology class. 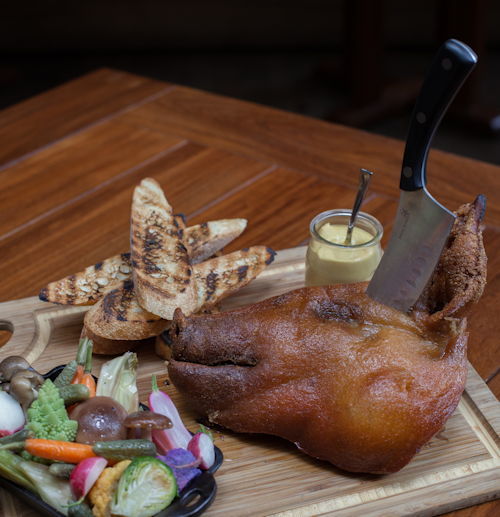 Love how the big knife sticks right up outta that thing as if to ask: "And ... ?"

Other restaurants are going the ears-and-snout route, too. Next question: How to use these things in cocktails?