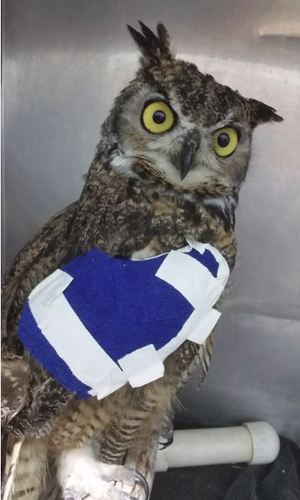 This large, and otherwise healthy Great Horned Owl was found by a Novato resident, right outside her front door. The bird had been hit by a car and was obviously severely injured.

Fortunately, this owl's rescuer knew he needed to come to WildCare for the medical care he so desperately needed!

Once in the Wildlife Hospital, Medical Staff quickly gave the bird fluids and pain medication. One can imagine that being hit by a car would be very painful, and this bird had obviously been grounded for multiple hours.

After the pain medications had taken effect, Medical Staff sedated the owl and took radiographs (x-rays). Unfortunately, the radiographs showed significant damage to the owl's right wing. A bird's wing is somewhat similar to a human's arm, with two bones in the forearm, the radius and the ulna, connecting to the humerus in the upper arm. This bird had a fractured ulna and a luxated (or dislocated) radius. Both of these are significant injuries, meaning this owl's prognosis remains guarded.

However, the bird was otherwise very healthy, so Medical Staff decided to stabilize the broken bones by wrapping the wing while they explored options for a veterinary surgery.

But Great Horned Owls don't LIKE having their wings wrapped! No animal in the Wildlife Hospital likes the bandages or other restraints their treatments require, but this owl proved especially disinclined to remain bandaged. 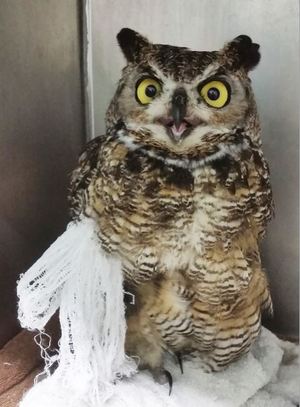 The next morning, WildCare volunteers and staff found the owl in a pile of torn bandage, his wing wrap completely destroyed.

The wing was carefully re-wrapped, and this time, Medical Staff added "distraction tabs" to the outside of the wrap.

What's a distraction tab? It's a little piece of medical tape that sticks out, offering a tempting target to a curious beak. This piece of tape doesn't actually go anywhere, however; it's not part of the overall construction of the wing wrap. Frequent utilization of this method has proven that a wildlife patient will spend hours pulling, tugging and otherwise destroying distraction tabs, and will often leave the actual wing wrap alone.

But this owl was not so easily deterred. The next morning, despite the carefully placed distraction tabs, the owl had once again successfully removed the wing wrap. This was a clever owl indeed!

Fortunately, the third time was the charm. As of this writing, the owl has been successfully confounded by the large number of distraction tabs placed on his bandage, and has not been able to remove his wrap. His medical chart reports that he is eating well, and that his attitude is fiesty. With luck, this clever owl's injuries will heal and he will be able to return to the wild.