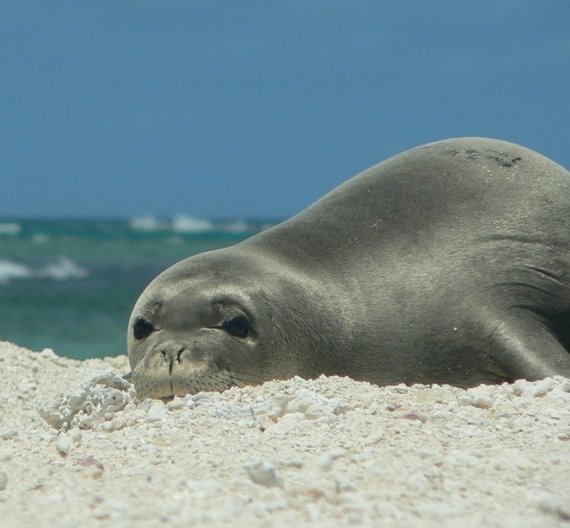 It's happened again. Another endangered Hawaiian monk seal has been beaten to death in Hawaii.

Sunday's death of this young female monk seal -- known as RF58 - is the ninth suspicious death since 2009. Some have been shot, others bludgeoned.

Each of these deaths is a tragedy that's being played out as part of a larger plight: Hawaiian monk seals are among the rarest mammals on Earth, with fewer than 1,000 seals remaining. For a species already flirting with extinction, even a few deaths can tip the balance out of their favor.

The death of RF58 is particularly heartbreaking. She was born in June on Kauai's northeast coast, daughter to a popular seal nicknamed Rocky, who mostly lives on Oahu but breeds on Kauai. They've had their share of hardships. In July, a dog attacked RF58, Rocky and another pup. RF58 was wounded and survived, but the pup was killed.

RF58 made Kauai her home, and was frequently sighted. She'd been spotted less than 24 hours before she was found dead at Anahola beach. A necropsy showed she'd suffered severe blunt force trauma to her skull that killed her.

This isn't how her life was supposed to turn out. RF58 was coming into her breeding years, bearing the promise of more pups and the hope of recovering this critically endangered species.

We don't know who's been killing Hawaiian monk seals or why (though it comes at a huge risk because killing an endangered species is a state and federal crime with a sizeable punishment). Even though they are native to Hawaii -- it's the only place they exist in the world -- some view them as intruders. They've become a politicized species, spurring controversy over fisheries, habitat safeguards and even what level of protection they deserve. It is and should be an issue of national concern.

These deaths come at a critical time. Seals have been returning to the main Hawaiian Islands in recent years, even showing up on popular beaches like Waikiki and Poipu and having healthy pups. Their return is an important counterbalance to seals that are dying the remote Northwestern Hawaiian Islands, where pups have a 1-in-5 chance of survival.

The main Hawaiian Islands remain one of the best places for their recovery. I'm hopeful that can still happen and there is still certainly some important work to be done among everyone on all sides of this issue. No one ever said saving species isn't complicated or difficult. But while there may be disagreement over details and direction there should be no disagreement that seals like RF58 deserve better than a brutal death on the shores of paradise.