I wanted to give Richard Cohen the benefit of the doubt. I really did. As a writer, I know the break-neck pace of deadlines and Twitter and the volume of stuff zooming across our editors' desks gives little time for anyone to process information -- never mind form intelligent, well-thought-out opinions before putting them on the Internet -- where they will always remain a reflection of us.

In case you missed the brouhaha, the Washington Post opinion writer Richard Cohen's recent piece about Chris Christie stated "Today's GOP is not racist ... " but then went on to say, "People with conventional views must repress a gag reflex when considering the mayor-elect of New York -- a white man married to a black woman and with two biracial children."

Still, I didn't want to rush to judge Richard Cohen.

Perhaps his intention was to place "supposedly" before "conventional." Or perhaps the original draft held quotes around the word "conventional" that got dropped in formatting (I still cringe at an online piece I did where my em dashes were changed to double en dashes).

But after looking at Cohen's columns, it seemed unlikely. From defending the right of storeowners to discriminate against black males, to claiming Trayvon Martin's hoodie was the uniform of criminals, to classifying the horrific Steubenville rape case as "so-called" rape because it did not involve intercourse, to personal accusations against him for sexual harassment -- I'm left scratching my head as to why the paper kept this out-of-touch lawsuit-waiting-to-happen around for so long.

The paper hired Cohen the year after Loving v. Virginia -- the 1967 United States Supreme Court case that deemed laws forbidding interracial marriage unconstitutional. It seems Mr. Cohen has not looked out his window since then. However, our outrage should be reserved for the Washington Post for being so irresponsible as to give a man whose worldview hasn't evolved past Archie Bunker's armchair a vehicle to comment on culture and politics.

There were expressions of shock and disgust all over social media. I reacted the same way I react to everything -- I made a bad joke. I Facebook-shared and tweeted a picture of my tri-racial family, claiming no one could possibly gag because we were just too damn adorable. Many agreed. One commenter said we looked like one of those "perfect family" photos that come with the frames you buy at JC Penny. Another said Benetton should give us free sweaters. 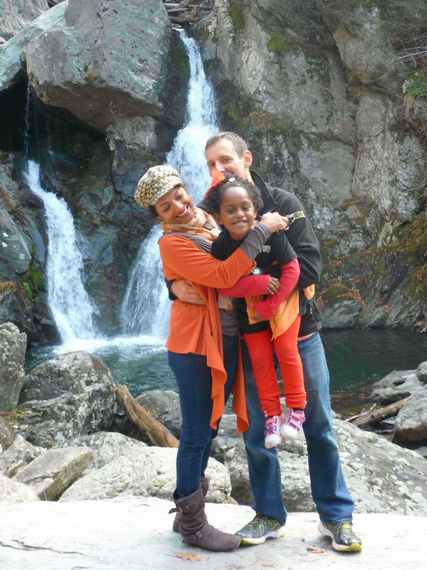 I went on to jest that if we weren't "conventional" then we must be "innovative." My call to action was asking people to tweet pictures of their #innovativefamilies to the Washington Post. My efforts fell flat. I had horrible flashbacks to the time I tried to start my own dance craze (though I still dream of a day kids will be doing the "Mel-ster" from coast to coast) but my impetus was the right one.

Richard Cohen shouldn't get a rise out of us. He should be treated as a punchline. He's ridiculous. He's irrelevant. He's not going to write for the Post into infinity (and perhaps not into next week). He's like that grumpy uncle with his pants encircling his armpits spewing racist vitriol at the Thanksgiving table while your mom is whispering to you in the kitchen, "Sorry honey, I had to invite him. He's all alone."

I know it's easy for reasonable people to get disheartened -- Paula Deen, kids trick-or-treating as Klansmen, Richie Incognito -- every week there seems to be something to get us down, but here's the thing for us to remember: We are winning. Of course we have a long way to go before we can call ourselves post racial -- but 87 percent of Americans approve of interracial marriage. A black man is president of the United States. Bill de Blasio's landslide victory was due in part to his multiracial family, not despite it. Yes many battles are lost, but we are winning. There's more of us than them. So keep your chin up and cue the music. Ain't no stopping us now.