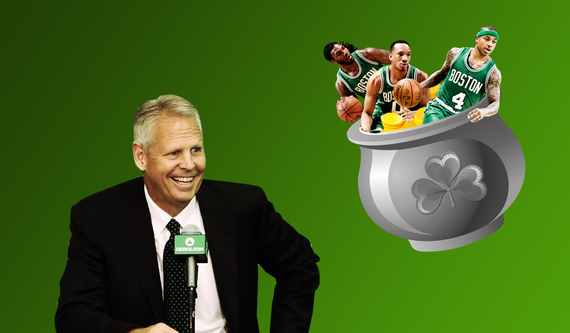 The Kevin Durant sweepstakes left teams in various states of disarray in their wake. One team is somewhere in the Bay, popping champagne and being light years ahead. Some are trying to sort through the post wreckage rubble and see where they go now. Others don't really care all that much as they may still be in a very solid condition. The Celtics on the one hand have ended up in a solid position, poised to propel themselves into the elite ranks of the East.

Missing out on Durant must hurt, but those are the feelings of at least four other teams that were in contention. Out of all of them, Boston came the closest, having the world on hold of 24 hours. The major difference here is that the Celtics did not stay put. They did quite a bit of business right away, luring Al Horford away from Atlanta. Furthermore, they stood pat post-Durant without scattering their salary cap space or being reckless with their assets. With what they've done, this could already be one of the more competitive teams out East, but it's so very unlike Danny Ainge to hold off on his trigger finger. So here are some options Boston may be staring down.

It might be hard for Danny Ainge to imagine this scenario. It might be well near impossible. Have you ever put an arsonist in a room with matches and then walked away for two minutes? The point is, don't leave Ainge in a room with a phone and a direct line to any other GM (except maybe Brooklyn). Boston is sitting on a cornucopia of assets and a pot of gold right now, well set up for the future. They own the right to swap picks with Brooklyn in 2017, flat out own their pick in 2018 (I know Nets fans, try not to cry), two first rounders in 2019 that can prove to be valuable (Clippers/Grizzlies) and about a trillion 2nd rounders. Of course, those are just assets, but assets down the road are better than slight improvement now.

What I'm saying is, even with improvements, Boston doesn't really lock themselves into the "we will try to beat Golden State and probably fail in the Finals" race. Yes, they got better, but it wasn't necessarily an astronomical leap required to beat the Voltron meticulously assembled in the Bay.

In Horford, they easily got their best (or second-best) player, no matter how you look at it. As I wrote before, Horford is the perfect addition to the Brad Stevens motion system that was already in top 10 (albeit on the tail end) of offensive rating in the league. He is also a very underrated defensive big, quick enough to zip around on perimeter PnRs against smaller line ups. Combine his savvy with subtraction of Evan Turner and Jarred Sullinger and Celtics may even improve their defensive rating which was already 4th in the NBA last season. They legitimately look like a top 3 defensive team right now.

The best thing about this is that Stevens has a lot more options with his line-ups and he can slot Horford across all variations either going traditional big with someone like Amir Johnson or small-ball with Jae Crowder at the four. Horford is a good mid-range shooter, scoring 23.7 percent of his total points from that range, shooting a neat 50.5 percent from the floor for the season. He's also not the worst from the three which will free up space for Isaiah Thomas to operate on his reckless drive. The one knock is 7.3 rebound per game mark, which is under what you would want to see from your center, but with players like Amir Johnson and Jae Crowder (good rebounder for his size) Boston has enough to rectify the situation. 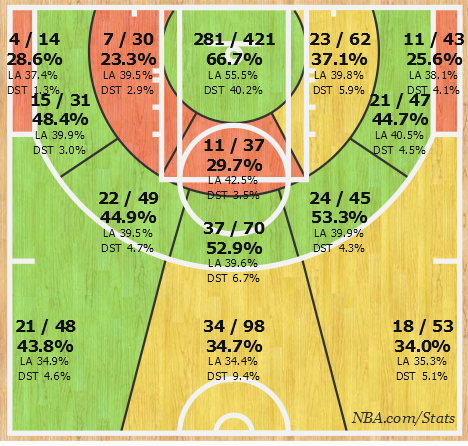 Horford really does make Boston better and allow them to challenge in the East. Combine that with very efficient seasons from Isaiah Thomas and emergence of Jae Crowder (my candidate for one of the neatest contracts in the league right now, signed under old cap, obviously) and there is a leap to be made here. The key to all of this will be Marcus Smart, who is projected to make a huge leap in the latest CARMELO Player Projections Report. Only four other players project to have a bigger WAR leap than smart and those players are Anthony Davis, Kyrie Irving, Andrew Wiggins and Kristaps Porzingis. That's not a bad club to be in.

At the end of the day, even if all of this signals significant improvement, it will be hard to challenge GSW for the ring. You would need Smart to not only make the leap, but make it so hard he may risk burning up as he enters the stratosphere. The foundation is already there to be one of the best teams in the next 2-4 year window so using this year as a stepping stone and keeping all the best assets close is just another brick in the wall.

Unfortunately, this is Danny Ainge we're talking about and while he is sitting on what appears to be a pot of gold, the need to make moves may be too hard to ignore. Boston has been a part of a lot of Free Agency rumors and as long as they're sitting on Scrooge McDuck worth of assets, they will inadvertently be tied to every trade out there. So what are some moves they can make?

Trade With OKC For Russell Westbrook 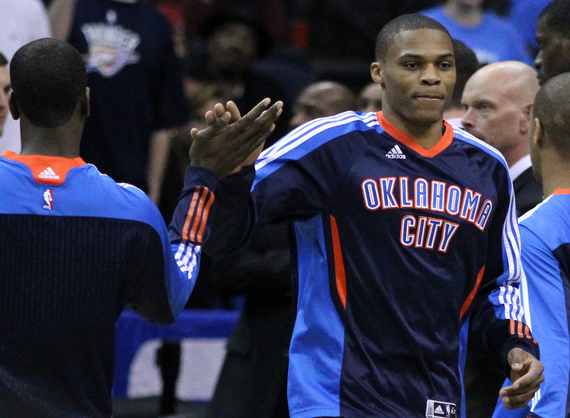 No matter what is coming out of the Presti camp, until we see Russell Westbrook's signature on an extension contract he is in play. Sure his wardrobe is maybe a little bit too flamboyant for Boston and the only motion-offense he is part of is motioning from Point A (hoop one) to Point B (hoop two) at super-sonic speeds on the fast break, but any time you get a shot a top five player in the league you take it. Figure out the offense later.

Boston would probably have to give up some picks, a young asset and a combination of Isaiah Thomas, Avery Bradley and Jae Crowder. Now, for all the options I am a huge advocate of keeping Crowder (except for the last one). He's the type of player who thrives in the modern NBA and can tie together both small and traditional line-ups in a pinch now that Stevens figured out how to best use his abilities. Punting on Isaiah Thomas even after an All-Star is really a no-brainer if you get Russ in return. It will take Stevens a bit of time to figure out how to rejig a normally fluid offense around Westbrook's key tendencies, but he has the right combination of shooters and big-men competent at mid-range to make it work. Plus, I just want to see a Westbrook-Smart pairing out of the back court. If I had to bet, I'd say they would suck up energy from home arenas just by entering in the vicinity. Kind of like the NBA version of Rogue from the X-Men.

Trade With The Clippers For Blake Griffin 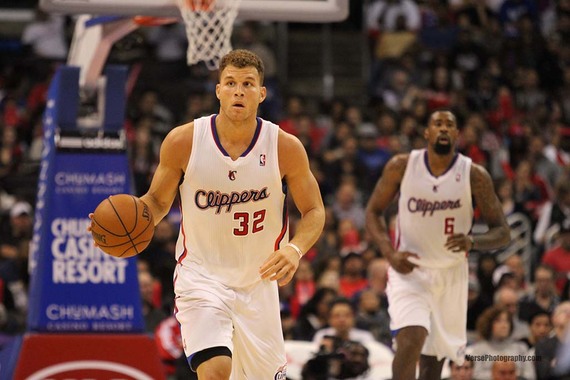 Similar to OKC, I say you try and keep Crowder, but as you're not getting a point guard in return, keeping IT2 may be a slightly more prudent move. Blake Griffin is exactly the type of big man who can help bring up the best in Horford while thriving himself. Think of him as Paul Milsap but on yet-to-be-identified steroids. For stretches of time, Griffin looked like the best power forward in the league. Not nearly as automatic at mid-range as Horford, he pairs well because of his dribbling and distribution abilities. He was in top 10 among forwards last year in assists per game (4.9) and second in passes made (59.9) to Draymond Green.

Griffin's ability to facilitate from the top of they key is perfect for a Brad Stevens operated scheme and setting up shooters of the wing. Combining it with Horford's mobility to open up the paint if he takes a few steps out and Griffin can be a beast in this system. If he can find a way to improve his mid-range game, the Celtics won't just replicate the Hawks 1-2 punch success in the post, they will blow it out of the water. 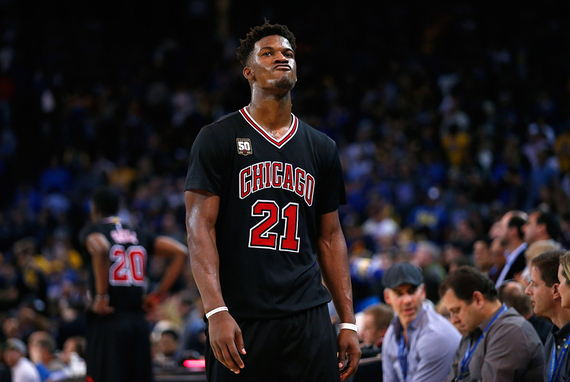 This is the one trade I will advocate for giving up Jae Crowder as what you're getting is such a better version of that. The Bulls are in a middle of an identity crisis, not entirely sure when to trigger their rebuild. If the team slumps early, inquiries will pour in for Jimmy Butler and rightfully so. He gives Boston another multi-dimensional scorer, not really exceptional from one place on the court but the sort of do-it-all wing to fit around Horfrod and whichever point-guard you keep to operate the floor.

In Chicago, Butler proved to be a solid off-ball player and my guess is if Stevens takes the ball out of his hands for extended stretches as a the main facilitator we might see an uptick in the shooting stats. Stacking Butler on the opposite side of the floor to a Horford and Thomas/Bradley/Smart Pick and Roll/Pop set could be deadly for teams and help the Cs stretch out the defense. Even so, Butler is the least impact player at the time out of all three so it would be imperative to try and keep Thomas in the mix as the main facilitator, even if that means stumping Smart's time as primary ball-handler, for now.

There are plenty of options for Boston to go and Ainge will need to make moves sooner rather than later while his picks still have some value. It's also easier to trade younger players on potential over when they start to show signs of not reaching the assumed heights. With Horford, Boston proved to be a savvy market operator, not really blowing the bank, keeping financial flexibility for 2017 and not overreacting and jettisoning any of their most valuable assets. With Marcus Smart coming into his own and a new and shiny fulcrum in the middle at Horford more options are open to them now. They can entertain the idea of trading literally anyone else on this roster if the haul is good enough.