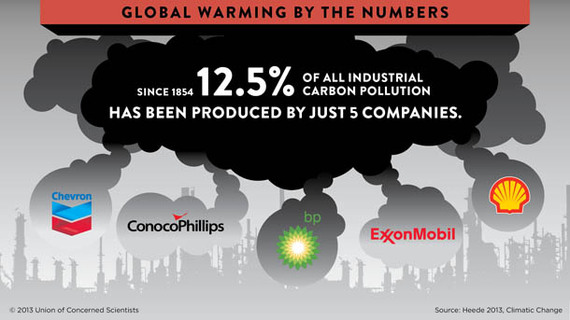 The Climate Accountability Institute's new study documenting that just 90 companies are responsible for two-thirds of manmade carbon emissions since the Industrial Revolution triggered some pushback in the blogosphere.

Blame the likes of BP, Chevron, ConocoPhillips, ExxonMobil and Shell for global warming? Not fair!

"It's just a cop-out to blame the producers of products that we have demanded, and benefited from, for more than a century," UC Berkeley economist Severin Borenstein wrote in a December 16 blog. "We haven't been misled or forced into buying those carbon-rich goods."

Andrew Revkin, a former New York Times environmental reporter who still writes for the paper's Dot Earth blog, reacted much the same way. "I have no problems with such analysis...," he wrote on November 21. "But the spin is pretty absurd. It's kind of like saying that the hundreds of thousands of firearm murders in the history of the United States are the fault of Smith & Wesson and its ilk."

Both Borenstein and Revkin concede that fossil fuel companies do have some responsibility, especially given the industry's track record contesting regulations and spreading climate disinformation. That said, Borenstein, Revkin and others point their fingers at consumers. The oil and coal companies may produce the stuff, but we're the ones who burn it every time we step on the gas or flick on the lights.

I get it. I'm old enough to remember that famous Walt Kelly 1970 Earth Day poster depicting his cartoon character Pogo looking at a garbage-strewn landscape and saying, "We have met the enemy, and he is us." Yes, we're all part of the problem. But it's no cop-out to call out the biggest offenders, especially when they're standing in the way of viable solutions.

In their haste to carp about spin, the critics were all too quick to gloss over the debilitating role fossil fuel companies have played over the last 15 years to quash U.S. efforts to reduce carbon emissions. During that time, the coal, oil and gas conglomerate Koch Industries, ExxonMobil, and other companies lavished tens of millions of dollars on a network of think tanks, advocacy groups and academic centers to sow doubt about climate science and attack renewable energy. They also plied federal candidates with more than $300 million in campaign contributions and spent more than $105 million on lobbying, according to Federal Election Commission data compiled by the Center for Responsive Politics.

In keeping with their outsized roles, Koch Industries and ExxonMobil spent more on campaign contributions and lobbying than any other fossil fuel company this year. How does that translate into policy? As I pointed out in a December 9 blog, 34 of the 52 signatories on a recent "Dear Colleague" letter organized by Rep. Mike Pompeo (R-Kansas) calling for killing a key wind industry tax break received Koch contributions during the last two or three campaign cycles. Thirteen of them also cashed checks from ExxonMobil. And except for two congressmen who didn't take any energy industry money, the signatories received sizable contributions from a number of other corporations that compete with wind, including coal barons Arch Coal and Alpha Natural Resources; and oil and gas giants Chesapeake Energy, Chevron, ConocoPhillips and Valero Energy.

As for Revkin's analogy, the fossil fuel industry is more like Big Tobacco than the gun lobby. Indeed, during the 1990s, many of the same think tanks that would later disparage climate science on behalf of Koch Industries, ExxonMobil and other fossil fuel interests received millions of dollars from tobacco companies to block efforts to address secondhand smoke, regulate tobacco as a drug, and curb cigarette advertising and sales to minors. Their playbook for protecting each of the two industries' profits -- as the Union of Concerned Scientists (UCS) explains in this slide show -- is essentially the same: stave off meaningful regulation by sowing doubt about the threat posed by their product.

The news media, meanwhile, have played a significant role as an enabler. Besides the usual suspects Fox News Channel and Wall Street Journal, leading news organizations without an obvious ideological ax to grind -- including the New York Times, USA Today and Washington Post -- routinely fail to identify these think tanks as proxies for fossil fuel interests and all too often fail to rebut their specious claims. By giving these think tanks a platform to spread disinformation, mainstream news organizations have helped undermine efforts to cut carbon emissions.

Consumers Can Make a Difference, But We Need Federal Action

Borenstein is correct that Americans haven't been "misled or forced" into buying gasoline to fuel their cars, coal-fired electricity to power their lights, or natural gas to heat their stoves. But fossil fuel companies, as well as the automakers, have fought tooth and nail to block cleaner alternatives, so for a long time, Americans -- who are still responsible for more carbon emissions per person than anywhere else in the world -- didn't have much choice.

Fortunately there are now more low-carbon lifestyle options that would go a long way to reduce carbon emissions. According to a 2012 UCS book, Cooler Smarter: Practical Steps for Low-Carbon Living, Americans could shrink their carbon footprint 20 percent over a 12-month period by, among other things, trading in their gas-guzzlers for more efficient cars, upgrading their home appliances, switching to energy efficient light bulbs, and eating less meat. If every American met this achievable goal, it would be the equivalent of shutting down 200 coal-fired power plants.

There is only so much individuals can do, however. We need a national effort. States have stepped into the breach to establish standards requiring electric utilities to ramp up their use of renewable energy and organize regional cap-and-trade compacts to cut utility carbon emissions. But gridlock in Congress, largely due to the fossil fuel industry's undue influence, has stymied federal efforts besides the Obama administration's laudable initiatives to curb tailpipe emissions and place stricter controls on new power plants. So it's long past time to shine a light on the culprits holding up progress, and the Climate Accountability Institute study does just that.