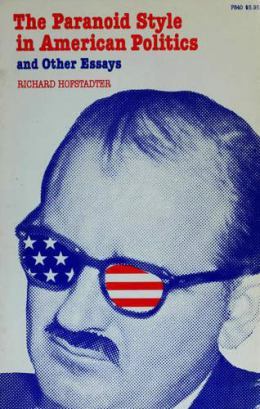 Some of us are sick of the vilification of political adversaries, whether right-wingers insinuating scandalous conduct by Hillary Clinton or left-wing agitprop against the Koch brothers. We can disagree with our adversaries, even passionately, without attributing sinister motives or magical powers to them.

Having "I'm right and you're wrong" factions is hardly a new thing. Remember Buffalo Springfield's great 1967 anthem, For What It's Worth (by the great Steven Stills)? "There's battle lines being drawn/ Nobody's right if everybody's wrong ... Singing songs and carrying signs/ Mostly say, hooray for our side."

Almost 50 years later our signs still "Mostly say hooray for our side." Yet there are two sides to most everyone's two cents. (OK, not Donald Trump. Just in general.) As Stills suggested polarization really doesn't work out so well.

There is another, starker, description of polarization: Paranoid Style. In 1964 Richard Hofstadter wrote a now-classic article in Harper's Magazine entitled The Paranoid Style in American Politics. Hofstadter begins this essay:

American politics has often been an arena for angry minds. In recent years we have seen angry minds at work mainly among extreme right-wingers, who have now demonstrated in the Goldwater movement how much political leverage can be got out of the animosities and passions of a small minority. But behind this I believe there is a style of mind that is far from new and that is not necessarily right-wing.

I call it the paranoid style simply because no other word adequately evokes the sense of heated exaggeration, suspiciousness, and conspiratorial fantasy that I have in mind.

Hofstadter inventories many instances, from Joseph McCarthy's rabid anti-communism, to an 1895 Populist Party manifesto against the gold standard, to an 1855 anti-Catholic movement, followed by a litany of other examples:

In the anti-Masonic movement, the nativist and anti-Catholic movement, in certain spokesmen of abolitionism who regarded the United States as being in the grip of a slaveholders' conspiracy, in many alarmists about the Mormons, in some Greenback and Populist writers who constructed a great conspiracy of international bankers, in the exposure of a munitions makers' conspiracy of World War I, in the popular left-wing press, in the contemporary American right wing....

The Paranoid Style leads to many problems in our ability to seize opportunities, many of which are only available if most of us participate ... together. (The Paranoid Style, humorless, also is just a drag.)

Looking for an Exit Ramp?
Exit here to Post-Paranoid Politics.

There are a number of great people and groups seeking an end to the Paranoid Style in Politics. I myself -- a certified member of the Vast Right Wing Conspiracy, nobody to the right of me! -- am intimately involved with arch-progressive Joan Blades's LivingRoomConversations.org.

Another member of its leadership, Debilyn Molineaux, also is national head of the Coffee Party that propounds a civility pledge "to conduct myself in a way that is civil, honest, and respectful toward people with whom I disagree. I value people from different cultures, I value people with different ideas, and I value and cherish the democratic process."

There are other groups, some calling themselves "transpartisan," many constituting themselves into a "Bridge Alliance" committed to "come together in civility, respect, and goodwill to solve problems together. Together, we can become a powerful and positive voice in the American political landscape advocating 'Country Before Party.'"

Is this news to you? It should be! The News Business thrives on reporting conflict. Joan Blades calls LivingRoomConversations.org a "domestic peace initiative." Peace is really bad for newspaper circulation so ... don't be shocked if this is the first you have heard of this.

Might not be the last. Thanks to the Huffington Post we've chipped a tiny hole in the Big Media Blackout.

Yes, peace makes for boring blogs ... like this very one. Yet Peace is Healthy For Children And Other Living Things. We're unrepentant.

If you love being in an "arena of angry minds," if "animosities and passions" are your idea of a good time, congratulations! Look around. The media is glutted with animosities. Feast on!