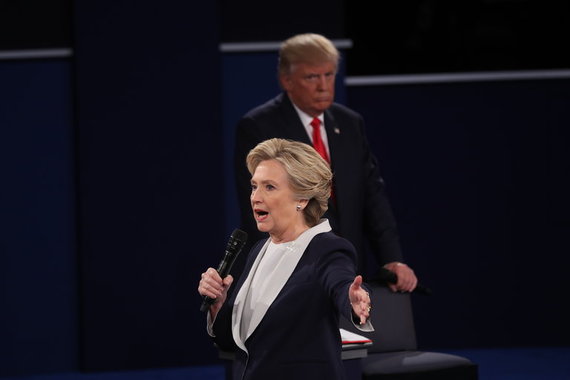 All women know someone like Donald Trump. We've encountered him on the playground, where he bullied us; we went to high school with him, where he snapped our bra; he was that date-rapey dudebro in college that ranked you with a number based on your looks at his frat parties; he was your colleague that you had to make nice with but who constantly talked over you during meetings and took credit for your work; and if you've been really unlucky, he was your boss.

The reason women respond so viscerally to Donald is because we've experienced him before, in one of these permutations. He scared all of us and scarred some of us. After the vulgar tapes were released (filled with absolutely nothing surprising under the sun, if you've been paying any attention), suddenly everyone agreed unanimously that his behavior was unacceptable.

I'm not sure why this particular event was the tipping point since all evidence of his off-the-charts Creep Factor was there from the very beginning, but finally, everyone seemed to wake up from a drug-induced slumber at the same time. His fellow republicans rubbed their sleepy eyes and took to Twitter and Fox News to clutch their pearls and say how shocked--SHOCKED, I tell you!--they were about what they heard.

If you had a GOP Speak-to-English translator, it would say something like this: "I can't believe he actually said those things! On tape! I mean, I totally agree and often say the same things myself but I always make sure there isn't any tape rolling. Also, Donald, you rube, all you have to do is just legislate assaults on women! Pass strict laws concerning their bodies, make sure you pay them less than men in the workplace and restrict access to birth control. That's how we do it! And make sure you're maintaining a wholesome Family Values image the whole time, by the way."

On Twitter, there was an unbelievably brilliant and horrifying dissection of Donald's apology by Leah McElrath. She broke down the latent abusive techniques inherent in his statements. Read it and share it. And also on Twitter, Kelly Oxford asked her followers if they had any stories of sexual assault, like the type Donald could be heard bragging about on tape, and at last count...9.7 million women responded with their own tales. Yes, you read that right: 9.7 MILLION.

In that same vein, I was thinking if I had any "Donalds" in my life: men who made it difficult for me in the workplace by using the same tactics Donald is using on Hillary during his campaign and especially, during the debates. As probably most women would agree, the answer was yes. So I'm going to share my Donald story, which takes place in a symphony orchestra; feel free to share yours in the comments section, I would love to hear them.

But first, some background: I knew from day one that I was entering into a male dominated field and that it was also extremely competitive. I knew, for example, that sexism was so rampant in my field that they had to hold orchestra auditions behind a screen, so the audition committee couldn't see what you looked like.

The screen wasn't enough and a carpet strip was added to muffle the sounds of footsteps (women's heels as opposed to men's loafers, for example) on the stage. And also, you are not allowed to speak--not utter a sound--during these auditions, to further hide your identity. Because of this, the number of females in orchestras has skyrocketed.

But it's still tough once you get in. I was in an Orchestral Studies program where we worked closely with members of the Chicago Symphony Orchestra, playing in their training orchestra and studying privately with their members. We were told, over and over in our lectures and seminars, that there was a long line of people standing behind us, just waiting for their chance to take our spot. We were taught not to make waves: if you had a problem with a colleague, suck it up and deal with it because it was too hard to win another audition in a different orchestra. That's why, they said, they had members of the CSO who sat next to one another and played side-by-side, but hadn't spoken a word to one another in 25 years.

So I was literally trained to put up and shut up. I was a free-lancer so I didn't have job security. I was playing with the top groups but that could change overnight. My first year with a professional orchestra in Chicago, I was doing my best to be professional and fly below the radar: show up, do my job excellently and make a good impression as the newest and youngest member. All was going great until I got a call from the music librarian, the person in charge of marking all the parts and distributing them. This guy, let's call him Donald, was only a few years older than me, but he had been there first and so had seniority.

Donald called me at home to tell me that he was under strict instructions from the orchestra to try and save money any way he possibly could. With this in mind, he wanted to save the postage and hand-deliver my first violin part for the upcoming ballet.

No, thank you, I said. Please mail them to me.

He insisted. I can only give you your part if you meet with me.

I told him I would pay for the postage myself, to just send it. He refused.

Enter my husband. I was very funny about my husband during this time in my career. A couple of years earlier, my violin teacher from the CSO whom I loved, respected and had known since I was a kid, wanted to schedule another coaching session before an upcoming audition. I told him I couldn't make the evening he suggested because it was our first wedding anniversary and we were going out to celebrate. He told me that while I had been busy meeting my husband, dating him, planning a wedding and getting married, other violinists had been busy practicing. And now, I was auditioning against those other violinists. He told me not to let people know that I spent my time dating and getting married, for it would put me at a disadvantage in their eyes. In contrast, getting married lent my husband an air of maturity and respectability for his career in finance.

I remember crying on the entire walk home from my lesson where I unloaded on my new, non-musician husband, telling him we had to cancel our dinner reservations. I'll never forget what he said to me: "He may be one of the greatest violinists out there, but there are other measures of success in life and I don't count someone struggling through their third marriage as someone who should be giving out relationship advice."

So when I told my husband about my creepy Donald, he said, "Tell him a day and time to deliver the music and I'll be here waiting for him. Problem solved." My husband played Division 1 football in college and is a really big dude. That would solve the problem, but I was afraid to use him as my muscle, for fear of calling unwanted attention to myself. I told him I'd just refuse and insist that Donald mail me my parts.

So I did. Again. And again.

And that's when my Donald told me how cute my dog was.

What, I asked? How do you know?

He described my dog in detail and told me he really liked to ride his bike along the lakefront and in the parks in my neighborhood and he'd been seeing me a lot, while I was out walking my dog.

"Maybe one of those times, I'll stop and we can talk. Or I can bring you the music then."

I told him again, send my music in the mail. Again, he refuse, saying he would just bring it to the first rehearsal instead, which meant I wouldn't be able to practice my part ahead of time, putting me at a disadvantage.

At the first ballet rehearsal, he walked up to me, and very coldly shoved my violin part in my hands. I took it back with me to the last stand of the first violins, where I was sitting alone in the small section for the pit orchestra. I opened my part and saw that it was completely blank: he gave me an unmarked part.

This means that there were just the music notes but no bowings, no cues, no cuts-- no additional information about the performance we were giving. These are the markings that he was getting paid as librarian to make and he didn't do it. It's akin to giving someone a complicated baking recipe with the ingredients listed, but giving no measurements, cooking times or even an oven temperature.

I did my best during rehearsal, trying to follow the bowings of the Concertmaster, but I was often off from the rest of the section. I scribbled notes and bowings, changes in tempo in my part, while trying to blend in. The conductor was shooting me dirty looks, so I went up to him to apologize and explain what was happening during our break.

I told him I had an unmarked part because that is what I was given and I was doing my best to get the bowings. He said, and I'll never forget this, "Of course you'll get the right bowings. Because if you don't, you're fired." And he walked away. I looked over at my Donald who was watching from afar, smiling at me.

That happened fifteen years ago. The 2016 version of me would NEVER take that kind of shit. I now have more wisdom, experience and most importantly, confidence. I have such a strong sense of self now that I didn't have when I was first starting out professionally. I would never allow myself to be treated that way today: I would never, ever be quiet. And I would absolutely ask for help now, make a fuss and accept no blame for somebody else's poor behavior. But it took me fifteen years to get from there to here; you don't develop professional confidence overnight.

Most women who are professionals have stories of their own personal Donald. He's everywhere. It's hard to stand up to men like him, because they are so good at what they do: bullying, intimidating, harassing. We've been trained and told, implicitly or not, to be "nice," to not make a scene, to get along. The more we women speak up, and the more men stand up for us in the face of discrimination, the harder it will be for men like Donald to pull their crap.

I can't even imagine the stories Hillary must have about being mistreated on her rise to becoming (please, God) the first female President of the United States. She has held her head high while being attacked during these debates; while being stalked by Donald with his weird creeping and leering; while being constantly and repeatedly interrupted; by being threatened with imprisonment, for God's sake! By doing so with such quiet strength, she is paving the way for all of us and exposing Donald and his ilk for the predatory scumbags they are.

And for that I'd like to say: thank you, Hillary.