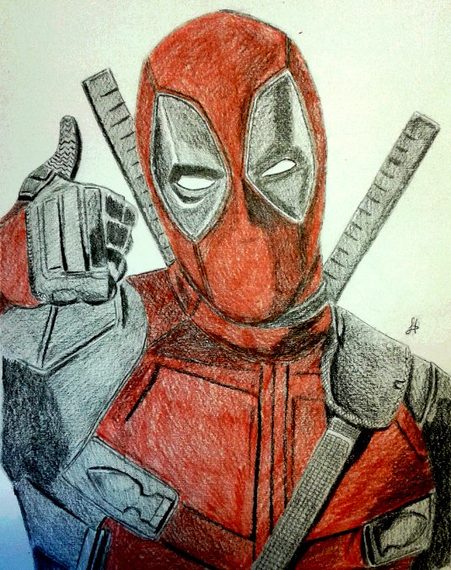 drawing courtesy of Dolores Hernandes (MangaPortrait); based on the Marvel character, Deadpool

The title isn't a question I'm posing but one already asked by the mouthy mercenary, Deadpool, in his eponymous movie, which centers around a man who trades his own cancer cure for disfiguration and a super-advanced healing factor and who takes nothing, including himself, too seriously; however, in lieu of fondling one's way to the top, writers these days are taught that the film world needs, wants and rewards authentic voices.

I'm not saying there isn't some truth to that, but let's step back and admit the chasm of difference between one whose unique voice is Deadpool and one whose is Queering Yoga. Granted, the tact-challenged Deadpool -- who aims his humor at young men old enough to get into R-rated movies -- is pansexual, but you wouldn't necessarily know it from what Matt Belloni, executive editor of The Hollywood Reporter, identifies as:

Is Deadpool, however, really different, or is it different in a way that still doesn't make waves in the broader status quo? Creative folks aiming to make a career of it meet advice like the following at every turn:

-- Jacob Krueger, "Branding Yourself As a Writer"

Valid as it may be, the authentic voices of those writers, while sometimes quirky, wouldn't make a hetero-normative white man uncomfortable. I'm not trying to pick on Krueger because he's correct about authenticity being key to the sort of writing that moves people to laughter and/or tears, but if you want to finance a movie, your brand has to get past gatekeepers who believe white males spend the most money on films, and further, count on the premise that everyone else will follow suit, having been conditioned to identify with dominant cultural ideas through years of few alternatives and some pesky societal prompts. OK, they may not use quite those terms.

A new study from USC Annenberg's Media, Diversity, & Social Change Initiative found that "an epidemic of invisibility runs throughout popular storytelling." Says Stacy L. Smith, lead author of the study, "when we talk about the issue of diversity in Hollywood, it's not a problem, it's a crisis."

The study, which for the first time includes the LGBT community, exposes a blink-and-you'll-miss-it mentality that allows for 2 percent LGBT representation onscreen, with depictions of transgender people contributing .06 percent to the stat.

from Inclusion or Invisibility? Comprehensive Annenberg Report on Diversity in Entertainment, graphic, p. 11

Bleaker still, though not studied, is the scarcity of transgender people involved in the creation of mainstream media. One of the most troubling effects of this lack of diversity is that, as Transparent creator Jill Soloway makes note, storytelling from any one point of view programs its normalcy:

Recognizing the essential problem that talented people who land outside the mainstream are often underestimated before they have a chance to learn and grow, Soloway continues:

"...the more I see it, the more I realize that it's really as simple as allowing people access to the camera and to the directing chair and to the scriptwriting who haven't had that kind of access."

As it currently stands, "difference" sets you up to be judged differently. For many, this translates into limited opportunity and resources to create, especially demoralizing for those who've had previous success. Transgender filmmaker Ewan Duarte, whose campaign for Queering Yoga I mentioned earlier, previously made two short films -- Spiral Transition and Change Over Time -- that have collectively screened at more than 140 film festivals nationally and worldwide, yet that success doesn't translate to the same industry chatter and job opportunities as for those who fit the well-touted version of a proficient filmmaker. Director Lexi Alexander puts it this way:

"You see that so often -- white guys who have one indie at Sundance and then, suddenly, they've got five pilots in the works. Some British guy who's only made two music videos isn't thought of as a risk, whereas me -- someone who's been nominated for an Oscar, I am. We're constantly being set up to be underestimated."

Contrast this with J.J. Abrams, who:

"...admits his earliest works weren't that good. But he got better. He won a teen film festival and got written up in the Los Angeles Times...The article caught the eye of Steven Spielberg. He reached out to the young filmmaker, who reminded him of himself. Today Spielberg is Abrams' friend, collaborator and a big fan."

And J.J. Abrams wasn't the only beneficiary. Brad Bird introduced Colin Trevorrow to Steven Spielberg essentially by saying, "there is this guy that reminds me of me." Spielberg then watched Trevorrow's 2012 Sundance indie Safety Not Guaranteed, hired him to direct Jurassic World, and according to Forbes contributor Rebecca Theodore-Vachon "has gone on record saying Trevorrow reminded him of a younger version of himself, and was on-set to mentor the upstart director."

Reminding someone of oneself is far from the only factor in hiring, but it's likely to have an impact. People feel most comfortable and build trust more easily with others who are similar to themselves, so if most employers hail from the achromatic XY cluster, you can see where this puts everyone else. This isn't because most people actively block out others, but privilege has a way of blinding you to it if you benefit from it, perhaps as some misapplied form of self-protection.

Changing the film and television industry is going to require people with Hollywood horsepower taking more risks on talented folks who don't remind them of themselves. They're going to have to do more vis-à-vis the "if you see it, you can be it" slogan making the rounds these days regarding representation. Change is also going to require, as Lexi Alexander notes, "[creating] an inclusive environment where people feel comfortable enough to thrive and do good work."

If you happen to be from a community generally underserved by the mainstream, I'm telling you what you already know, but for those of you who aren't, consider the daily psychological effects of the following, written by Erica Joy Baker, a Build and Release Engineer at Slack Technologies in the Bay Area: 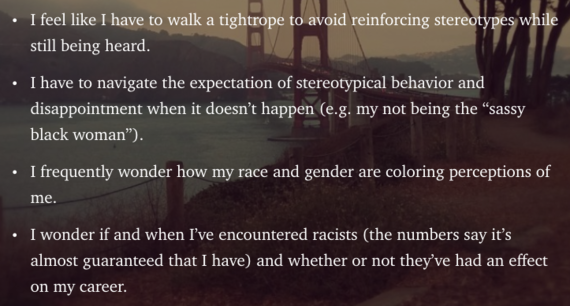 from medium.com "The Other Side of Diversity"

Part of a longer list, these illustrate just a sampling of considerations those who drive the majority of mainstream content never need to consider. I've said it before, but it bears repeating: representation matters. Exposure to multiple points of view, rather than pushing us apart, allows us to see what we have in common and thus what brings us together as human beings...and isn't that what storytelling is about anyway? Yeah, I know this is "show business, not show art." What can I say? Put some muscle behind different points of view and I'm telling you, there is money to be made from people hungry for representation of themselves onscreen.

I'm not saying change is easy or simple, but it seems to me that today's children have the opportunity to become richer in ways that have little to do with money. Some of that is driven by what they see onscreen -- or on many screens -- so I think we owe ourselves and the next generation a chance to make the most out of living in a world that has started to embrace difference.

As for Deadpool, that little film I mentioned earlier, it clearly knows its audience and is speaking to them here:

"You're probably thinking 'Whose balls did I have to fondle to get my very own movie?' I can't tell you his name, but...lemme tell you, he's got a nice pair of smooth criminals down unda'."
-- Deadpool

Wolverine may be the correct answer, but the rest of us shrug and say, "Who gave you your very own movie? I'm gonna guess that in the midst of all that symbolic fondling, you reminded him of himself."