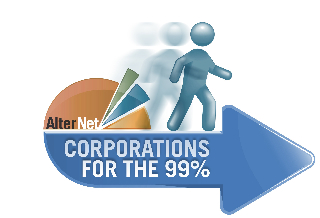 Corporations are not working for the 99 percent. But this wasn’t always the case. In a special five-part AlterNet series, William Lazonick, professor at UMass, president of the Academic-Industry Research Network, and a leading expert on the business corporation, along with journalist Ken Jacobson and AlterNet’s Lynn Parramore, will examine the foundations, history and purpose of the corporation to answer this vital question: How can the public take control of the business corporation and make it work for the real economy?

Historically, corporations were understood to be responsible to a complex web of constituencies, including employees, communities, society at large, suppliers, and shareholders. But in the era of deregulation, the interests of shareholders began to trump all the others. How can we get corporations to recognize their responsibilities beyond this narrow focus? It begins in remembering that the philosophy of putting shareholder profits over all else is a matter of ideology which is not grounded in American law or tradition. In fact, it is no more than a dangerous fad.

The Myth of Profit Maximizing

Since this sentiment is so familiar, it may come as a surprise that it is factually incorrect: In reality, there is nothing in any U.S. statute, federal or state, that requires corporations to maximize their profits. More surprising still is that, in this instance, the untruth was not uttered as propaganda by a corporate lobbyist but presented as a fact of life by one of the leading lights of the Democratic Party’s progressive wing, Sen. Al Franken. Considering its source, Franken’s statement says less about the nature of a U.S. business corporation’s legal obligations – about which it simply misses the boat – than it does about the point to which laissez-faire ideology has wormed its way into the American mind.

The notion that the law imposes a duty to “maximize shareholder value” – a phrase capturing the notion that profits are mandatory and it is the shareholders who are entitled to them – is so readily accepted these days because it jibes perfectly with assumptions about economic life that constantly come down to us from business and political leaders, from academia, and from the preponderance of the media. It is unlikely to occur to anyone under the age of 40 to question this idea – or the idea that the highest, or even sole, purpose of a corporation is to make a profit – because they have rarely if ever been exposed to an alternative view. Those in middle age or beyond may have trouble remembering a time when the corporation’s focus on shareholders’ interests to the exclusion of all other constituencies –customers, employees, suppliers, creditors, the communities in which it operates, and the nation – did not seem second nature.

This narrow conception of corporate purpose has become predominant only in recent decades, however, and it flies in the face of a longer tradition in modern America that regards the responsibilities of a corporation as extending far beyond its shareholders. Owen D. Young, twice chairman of General Electric (1922-'40, 1942-'45) and 1930 Time magazine Man of the Year, told an audience at Harvard Business School in 1927 that the purpose of a corporation was to provide a good life in both material and cultural terms not only to its owners but also to its employees, and thereby to serve the larger goals of the nation:

This holistic declaration was echoed, albeit in more specific and practical terms, by the chairman of another massive US corporation, Johnson & Johnson, during World War II. In his 1943 “Credo,” a somewhat modified version of which can be found on the company’s Web site today, Robert Wood Johnson II identified five distinct constituencies and established an order of priority in which they would be served by his firm. Johnson & Johnson’s “first responsibility,” he wrote, was to its customers: “the doctors, nurses, hospitals, mothers, and all others who use our products.” In second place came employees; in third, management; and in fourth, “the communities in which we live.” The interests of the stockholders, the corporation’s “fifth and last responsibility,” appear subordinate in his mind both to the firm’s sound operation, which depends on attention to the interests of the other constituencies, and to its long-term welfare:

“Business must make a sound profit. Reserves must be created, research must be carried on, adventurous programs developed, and mistakes paid for. Adverse times must be provided for, adequate taxes paid, new machines purchased, new plants built, new products launched, and new sales plans developed. We must experiment with new ideas. When these things have been done the stockholder should receive a fair return.”

A Shift in Accountability

By 1978 the era of deregulation had begun and signs had appeared that corporate attitudes were shifting. In that year another GE chief executive, Reginald H. Jones, wrote that the “central principle of the present system is that a director’s accountability is to the owners of the enterprise.” Having set aside the broader visions of corporate duty held by his GE predecessor Young and by Johnson, Jones in effect moved the firm’s responsibility to its shareholders from last on the list to first: “If this principle is abandoned, if other corporate constituencies are placed on a plane with shareowners, if directors are required to represent directly the interests of nonshareowner groups…there will be no clear measure of directors’ responsibility because there will be no clear consensus on primary corporate goals.”

His personal preferences aside, however, Jones realized that Americans were not yet ready to accept firms’ turning their backs on the general good, and that he and his fellow executives had something to gain from being accommodating:

“If the concern is social responsiveness, or ‘public accountability,’ the short answer is that in this country at this time, no large corporate enterprise can afford to be perceived as oblivious or contemptuous of matters of genuine social or public concern. These enterprises have to earn from the general public and their political representatives – and earn from year to year – the right to continue to function without radical new governmental constraints.”

The dawn of Ronald Reagan’s presidency found the corporate community on the fence. The “Statement on Corporate Responsibility” issued in October 1981 by the Business Roundtable, which groups the CEOs of the largest US firms, recognizes six constituencies – customers, employees, communities, society at large, suppliers, and shareholders – as forming the “web of complex, often competing relationships” within which corporations operate. It accepts the idea that “shareholders have a special relationship to the corporation” but doesn’t allow their interests to trump all others:

“Balancing the shareholder’s expectations of maximum return against other priorities is one of the fundamental problems confronting corporate management. The shareholders must receive a good return but the legitimate concerns of other constituencies also must have appropriate attention. Striking the appropriate balance, some leading managers have come to believe that the primary role of corporations is to help meet society’s legitimate needs for goods and services and to earn a reasonable return for the shareholders in the process. They are aware that this must be done in a socially acceptable manner. They believe that by giving enlightened consideration to balancing the legitimate claims of all its constituents, a corporation will best serve the interest of the shareholders.”

Even after eight years of Reagan and amid the burgeoning of free-market ideology, the Business Roundtable remained reluctant to place shareholders first, affirming in 1990 that “corporations are chartered to serve both their shareholders and society as a whole” and adding creditors to the 1981 list of constituencies, which it otherwise retained intact. It was only in 1997, in a new statement whose title substituted “Corporate Governance” for “Corporate Responsibility,” that it renounced attempts to balance the interests of corporate constituents and, having reversed its view, argued that taking care of shareholders was the best way to take care of the remaining stakeholders, rather than the other way around:

An important step toward countering their influence can come in refusing to accept the legitimacy of shareholder primacy. Up to now, this fad has had the power to neutralize opposition in part because it has obscured the tool needed to challenge it: a clear understanding of the economic realities. For this reason, we must learn what contributions all stakeholders – not just the shareholders, but all the others as well – make to the corporation, and the extent of the risks and rewards those contributions truly entail. We must learn about the interrelation of business and government in all its complexity, going far beyond the headlines about taxes and regulation to discover who needs whom for what, and who does what for whom. And we must learn what rights corporations legitimately hold, what privileges they enjoy, and what duties they are obliged to carry out.

Without this effort, without this knowledge, we are in danger of continuing to be held captive by a fad.