The actress Julianne Moore recently sounded off about celebrity magazines. "They encourage young women and some middle-aged women to be interested in somebody else's narrative rather than their own," she told Moremagazine. "I don't want my daughter or her friends to be interested in Jessica Simpson. I want them to be interested in what's happening in their own lives." The message goes way beyond pop culture.

When I think about my own daughter and all the other "young women" who are the theme of this International Women's Day, I realize that I want to take Moore's message a step further: There are situations when resistance takes more than choosing to ignore a magazine story and more than the actions of any one woman. The contraceptive furor of recent weeks highlights the forces that are trying to impose another narrative -- theirs -- on us.

In the century since Margaret Sanger crusaded for birth control, women got the vote, entered the halls of higher education, broke into male-dominated professions (including the clergy), and made great and celebrated strides in sports. No one is trying to roll back those achievements. So how is it possible that anyone could argue that contraception is a matter of anyone's business other than the woman's own "moral conviction"? How can it be that a public figure can claim that using birth control makes an unmarried woman a "slut"? Why has it been so hard to establish the narrative of a woman's right to control her reproductive health?

This is a uniquely American state of affairs. Other western countries have left reproductive politics behind decades ago. But this is the home of The Scarlet Letter,and to this day women's sexuality makes some people lose all reason.

Most of us -- even those who grew up during the so-called "sexual revolution" -- have encountered one mixed message after another. When I was in college back in the 60s, the campus health service willingly dispensed diaphragms (a reward for being "responsible"), but when the one I got didn't fit properly and I became pregnant, the same health service told me flat out that I was "on my own" in terms of doing anything about it. That was my punishment.

In my lifetime, the effort to claim and maintain our dignity in the face of irrational and punitive attitudes has been a climb up a slippery slope of public humiliation. But we have made enormous progress, and with the help of our daughters and such brave young women as Sandra Fluke -- the law student who refused to be shamed by Rush Limbaugh and even rejected his smarmy "apology" -- and the outrage registered by millions of women to the all-male debate about whether to "let" women have birth control covered by their health insurance (as Viagra is), this may be the moment that we take control of that narrative once and for all.

Check out the slideshow for a look at events worldwide honoring International Women's Day.

PHOTO GALLERY
International Women&#039;s Day Around The World
Download
Calling all HuffPost superfans!
Sign up for membership to become a founding member and help shape HuffPost's next chapter
Join HuffPost

Whose Narrative Is It, Anyway? Some Thoughts On Sandra Fluke And Hester Prynne
International Women&#039;s Day Around The World 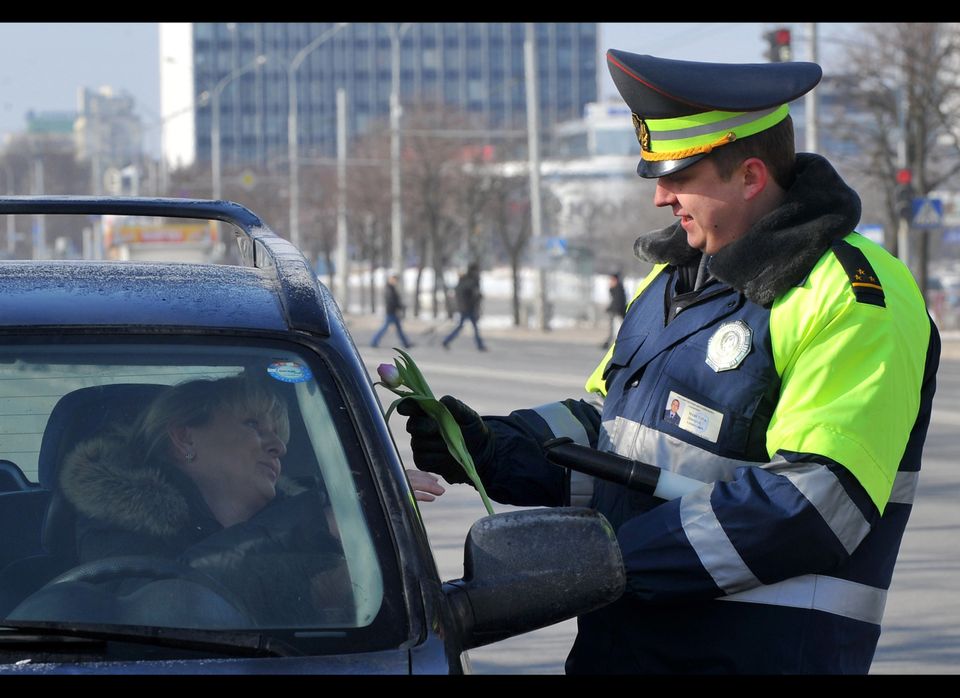 1 / 19
Minsk, Belarus
A Belarus policeman gives a flower to women driver in Minsk on March 7, 2012 a day before the International Women's Day, one of the popular holidays in Belarus, Russia and in other post Soviet countries. International Women's Day is a global day, observed annually on March 8, highlighting the economic, political and social achievements of women past, present and future.
Getty