While of course we still have a long way to go regarding gender equality, there is a lot to celebrate regarding feminism in 2014. As someone who has grown up immersed in the feminist movement from a young age (my mother Marianne Schnall founded the women's website Feminist.com), the reception of feminism has changed drastically from when I was a young girl. No longer am I immediately deemed as a bossy "man-hater" when I say I am a feminist and my peers are becoming increasingly aware of feminism's proper definition.

In the words of Emma Watson: "The belief that men and women should have equal rights and opportunities. It is the theory of the political, economic and social equality of the sexes." Overall, in 2014 the word "feminism" was all over the media, from politics to music, reaching audiences it never has before. Here were some of the most notable moments:

Amongst all of the party-chatter during the 2014 mid-term election, a huge stride was attained regarding gender parity in Washington. The 114th Congress will have a record-breaking 100-plus women serving. It is definitely not parity, but it is a step in the right direction!

2. Emma Watson reminded us that feminism is not just a women's issue, it is a human issue.

Her speech was widely received, and got some pretty kick-ass celebs supporting the message as well.

I'm supporting @UN_Women and @EmWatson in #HeForShe
As should you.. pic.twitter.com/RYtM4SKkqN

#HeForShe is a great cause to get behind! Please check it out. So proud of @EmWatson! pic.twitter.com/lJrUWcmPEo

3. Sexual assault on college campuses finally got some of the attention it deserves.

Columbia University student Emma Sulkowicz advocated for better policies and action regarding sexual and domestic violence, becoming an internet sensation and New York Magazine cover story. Sulkowicz stood up against how her university handled her case own case of sexual assault by pledging to carry a mattress with her until her rapist is expelled, inspiring students across the country to stand up against rape culture and domestic violence on college campuses as part of the "Carry the Weight" movement that creates support for survivors, and strives to foster awareness and action around the prevalence and misconduct around sexual assault on college campuses.

Additionally, President Obama launched the "It's On Us" initiative urging both men and women to stand up and prevent sexual assault. As he reminded us in his launch speech: "An estimated one in five women has been sexually assaulted during her college years -- one in five. Of those assaults, only 12 percent are reported, and of those reported assaults, only a fraction of the offenders are punished." The "It's On Us" initiative reminded America not only of the problem, but made sure to also emphasize that we all need to be active participants in its prevention.

"It's On Us" launched a great PSA featuring a plethora of big name celebs and icons too:

Malala Yousafzai was shot in the head three times by the Taliban in 2012 for standing up for her right to education in Pakistan, a place where girls are often banned from attending school. Since then, Malala has resiliently fought for young people's universal access to education, ensuring that all young girls have these essential opportunities and are free of violence and oppression. In addition to being the youngest Nobel Laureate to date, Malala Yousafzai has inspired us all with her incredible courage, wisdom and commitment to creating change through equality. 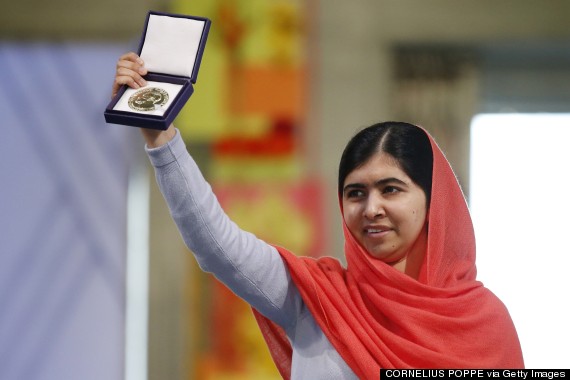 5. #YesAllWomen reached over 1 million tweets in 48 hours and continues to serve as a platform for women to discuss their experiences with misogyny and sexism.

After University of Santa Barbara shooter Elliot Rodger's videos and his "Deranged Misogynistic Manifesto" was revealed showing his strong resentment towards women, women all over took to Twitter to share their daily experiences with sexual assault and harassment, in response to the "NotAllMen" hashtag. The #YesAllWomen hashtag and social media campaign served as a powerful outlet for women to share their stories and raise support regarding the unjust experiences of sexism.

#YesAllWomen because when a girl is harassed or even groped by a stranger in public, we're told to "take it as a compliment"

#YesAllWomen deserve to live free from threats of domestic violence & sexual assault. We must shine a bright light on such despicable crimes

6. And of course, there was Beyoncé.

Queen Bey not only promoted feminism in 2014, but she has let the whole world see for themselves that she is a proud feminist and she owns it, as she stood in front of the word "Feminist" in humongous, block letters at the VMA's. Whether she was inspiring girls everywhere to get out their red bandanas and rock the Rosie the Riveter message, featuring the strong words and feminist musings of Chimamanda Ngozi Adichie in her hit song "Flawless" or writing an incredible essay for the Shriver Report about the chilling problems of gender inequality and the changes that need to happen in order to create an equal environment for the future of girls, Beyoncé has brought feminism to new levels of recognition. 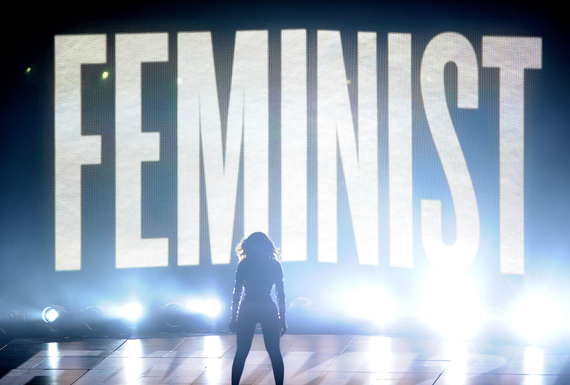 7. There was a new public awareness of the F-word.

And who can forget the work that celebrities such as Lena Dunham, Amy Poehler, Joseph Gordon-Levitt, Ellen Page, Taylor Swift, Laverne Cox and many more have done advocating for feminism in 2014?

We still have to remember that as supporters of gender equality the focus should be towards working to create real world changes within the political, societal and cultural power paradigms and conditions that perpetuate the oppression of women. The "label" of feminism, i.e. the headlines such as "INSERT CELEB NAME HERE says she is not a feminist" should not be the focus. However, growing awareness, on any level, around feminism and the importance of gender equality is key and I think 2014 has been monumental in its coverage and mainstreaming of women's issues.

Whether people are becoming aware of the reality of gender inequality through the White House, Emma Watson's speech, participating in college protests against sexual assault, reading about Malala Yousafzai, their favorite celebrity's Instagram or through hot hashtags, feminism in 2014 has found a more prominent place in the popular culture and consciousness, and for that alone, we should celebrate.