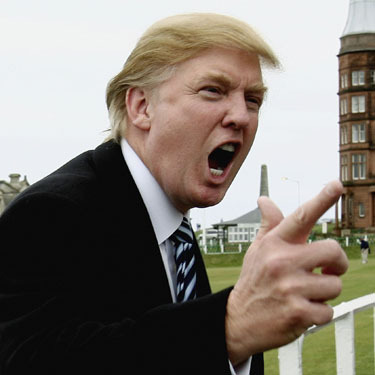 "I think it's dangerous,'' Hillary Clinton said in October. "[Donald Trump's] demagoguery is no longer amusing.''

Demagogues like Trump are nothing new in American politics. We've had plenty of them -- Huey Long, Joe McCarthy, George Wallace. But they've never gotten very far. Certainly not far enough to win a major party's presidential nomination. Trump may break that rule this year for a simple reason: the safeguards against demagoguery are not as strong as they used to be.

Other Republican contenders seem fearful of taking Trump on. They know if they attack him, he will hit them back twice as hard. But it's not just fear. It's also envy.

His rivals hope to steal Trump's supporters. They are convinced the Trump surge will not last once actual voting begins next month. Other Republicans are unlikely to attract Trump's followers if they attack him and denounce his wacky ideas, like building a 2,000-mile-long wall on the Mexican border and having the Mexican government pay for it.

The Republican Party establishment is horrified by Trump's rise. They know his nomination would be a disaster for the GOP. Big money Republicans like the Club for Growth are funding anti-Trump ad campaigns.

A veteran Republican operative, now an adviser to Jeb Bush, warned, "If we're not careful and we nominate Trump, we're looking at a race like Barry Goldwater in 1964 or George McGovern in 1972, [our party] getting beat up across the board because of our nominee.'' A former chief of staff to Senate Majority Leader Mitch McConnell said, "We'd be hard pressed to elect a Republican dogcatcher north of the Mason-Dixon line or west of the Mississippi.''

Trump is more dangerous than previous demagogues because the power-brokers in the party can't stop him. They have no power to broker. As Trump put it, "The establishment doesn't want me because I don't need the establishment.''

Party leaders used to control nominations. They were crass and cynical, but they were also professionals. Their business was to nominate winners. Their livelihood depended on it. They liked heroic figures who were above politics like Dwight Eisenhower. Sure winners.

Party professionals haven't changed. The Republican Party chairman of Ohio told Politico, "It's time for people who have never won squat to listen to the people who have been doing it for decades,'' adding, "I'm just looking out for how we win in November.''

What's changed is that the parties have turned over control of nominations to ordinary voters. Voters want to win, too, but their livelihoods don't depend on it. They are driven by enthusiasms -- for a cause or a candidate. Their politics is passion-driven, not interest-driven.

Don't Trump's supporters realize that nominating Trump would be a disaster for the party? No, they don't. Candidates like Trump believe in the "hidden majority'' theory -- that if you offer voters something radically different, you can turn out huge numbers of new voters.

Barry Goldwater tested that theory in 1964. He offered voters "A Choice, Not an Echo.'' Goldwater did bring out a hidden majority -- to vote against him.

You can't say it's impossible for Trump to get elected. But voters would have to be truly desperate. It would take an extraordinary crisis, like another 9/11 or another financial crash, to put Trump over.

If Trump wins more primary voters and delegates than any other Republican candidate, it will be impossible for party insiders to nominate a candidate who did worse than Trump. Trump will scream that the establishment is hijacking the convention and defying the will of the people.

The latest fantasy of GOP leaders is a brokered convention where no candidate goes in with a majority of the delegates and party leaders recruit House Speaker Paul Ryan, Mitt Romney's 2012 running mate, to be the party's standard-bearer. That's pretty desperate. Look how hard it was for GOP leaders to convince Ryan to run for Speaker.

You want to know what happens when a party insiders nominate a candidate in defiance of primary voters? That's what Democrats did in 1968, when party bosses nominated Vice President Hubert Humphrey. Humphrey did not compete in a single primary. The 1968 Democratic convention in Chicago was not a pretty sight.

Right now, there are two theories about how Trump will fare. One holds that if he doesn't have a strong ground organization, his supporters won't show up at the polls. A lot of them rarely participate in Republican primaries and caucuses. The voting will be dominated, as usual, by regular Republicans. Donald Trump is not a regular Republican.

The other theory holds that Trump excites so much passion and intensity -- and anger -- that his people will flood the primaries and caucuses. That, too, is a plausible scenario. The latest NBC News poll finds that 51 percent of Trump supporters say they will "absolutely'' vote for him, compared with 36 percent of Ted Cruz supporters and 26 percent of Marco Rubio supporters.

Which of the two scenarios will prevail -- revolution or retreat? We just don't know. That's what makes this campaign so unusual and so exciting. And, as Bill Clinton said this week, "kind of scary.''