When 26-year-old Alex Fine was fired from her job at a skincare company, she took it as a sign to flesh out an idea that had been rolling around in the back of her mind: founding a female-centric sex toy company that would change the way society talks about sex. As Fine -- who has a degree in sex therapy -- began sussing out business contacts in her Brooklyn neighborhood, she was constantly mistaken for 28-year-old-engineer Janet Lieberman, another entrepreneur with a similar sex positive venture in the works. Intrigued by the case of mistaken identity, Lieberman tracked down Fine and the women got to talking design, stimulation, and equality in the bedroom.

Lieberman -- whose 3D printer won five Best-In-Show Awards at the 2014 Consumer Electronics Show -- was focused on making well-engineered, mindfully designed products while Fine was interested in creating couple's toys that stray from the current industry go-tos: internal vibrators, cock rings, and rabbits. "I wanted to help women explore their sexuality and find equality in the bedroom," Fine says. Immediately, the two recognized their alliance potential and decided to collaborate. 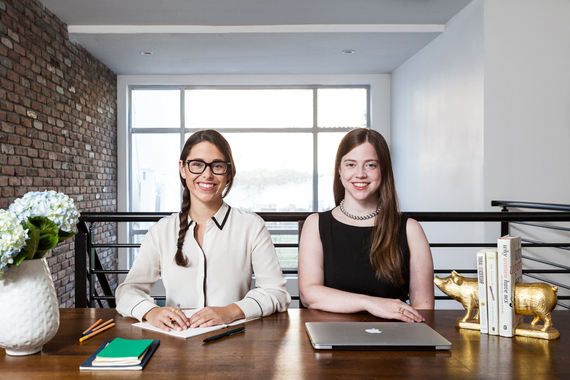 "We like to say we basically got married on the first date," jokes Fine. The pair named their new joint venture Dame Products and embarked on a Star Trek-inspired mission: to design well-engineered sex toys, to heighten intimacy, and to openly empower the sexual experiences of womankind. Nine months and a dozen prototypes later, the women raised over $700,000 on IndieGoGo for their first toy, a hands-free couple's toy named Eva, beating their goal by over 1,000 percent and ranking as one of the most successful Indiegogo campaigns to date.

While many female-focused sex toy companies have high-tech products (Crave, Jimmyjane to name a few), many of these "female-centric" companies are actually run by men, like JimmyJane's founder and creative director, Ethan Imboden.

"I think it's important that we're truly female founded and that -- while making products for people with vaginas -- we actually have vaginas," says Fine, who explains that while a lot of other companies are focused on making a product sexy, Dame wants their products to encourage a frank, honest conversation about sex, and the way we view the female orgasm.

"There are still a lot of dated gender roles and societal constructions that come into play during sex," says Fine. So what type of conversation do Fine and Lieberman hope Dame will spark? One that sheds light on skewed societal bedroom norms, like why -- in heterosexual relationships -- it's viewed as normal for a man to be more likely to orgasm during sex than a woman, or why men are more likely to report sex as satisfying. Why does the female orgasm come secondary to the male, and why is it often reserved for fore- or postplay? Regardless of how far our society's view on sexuality has come, men are still coming more often, and this assumed privilege of male pleasure isn't right.

Some (but not all) of this problem is technical. Many women need direct clitoral stimulation to reach orgasm, something that is often not included in penetration --the oft preferred male path to orgasm.

"Why aren't our clitoris' in our vagina?" Fine jokes. With this in mind, Fine and Lieberman hope to create both a dialogue and a toy design that will work in unison to erase the still-existing inequality in the bedroom, or what they call "the pleasure gap," enabling women to get the clitoral stimulation they need to orgasm during sex, while still keeping both intimacy and male comfort in mind.

This duality is not always present in the industry, as many couples toys designed to heighten female pleasure can actually stunt male enjoyment. As someone who used to review sex toys for Babeland, I remember an incident when a boyfriend removed a vibrating cock ring mid coitus, commenting that it made him feel like "robo cock" -- and not in a sexy, steel-suited cyborg way.

In addition to finding them uncomfortable or awkward, some men view toys as emasculating. Dame hopes to blast that misconception out of bed by showcasing toys as an aid, not a replacement. Consider Eva the side kick, not the hero.

This is why the pair is so focused on maintaining a hands-free design. While it's unlikely that technology will ever enter the bed undetected, Eva's stay-in-place composition -- which utilizes a unique dual wing design that tucks up under the labia -- allows users to use their hands for more fun maneuvers than cupping a piece of vibrating plastic to the body.

"When you have sex, you use your hands all the time; you're holding your body, your partner's body. You're using them so often that when you're holding a vibe in place and don't have a hand free, it makes it much more uncomfortable and awkward," says Fine. Reviews for Eva have been overall positive, although a few reviewers note positions like doggy style require hands, after all.

Investing time and effort into increasing personal and dual pleasure is courageous -- perhaps as courageous as creating a business with someone you just met.

"Your business partner is your life partner," says Fine. "It's a lot like marriage. It's work. That said, it was one of the smartest things we ever did. You read all these articles about female entrepreneurs being great because they're women, not because of what they're actually doing."

Moving forward, Fine and Lieberman are focused on keeping up with Eva's demand and continuing to open a dialogue about sexual equality and heightening intimacy -- Cyborgs not allowed.