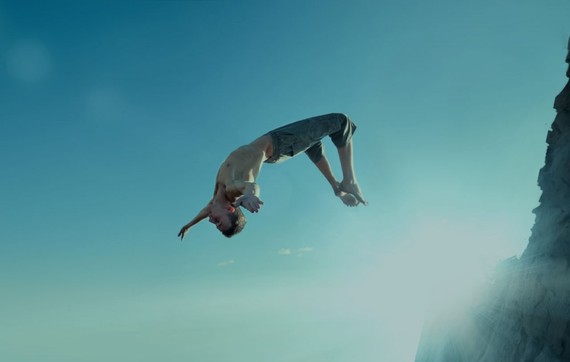 If you're reading this, you probably have dreams of getting into Harvard or Princeton or Stanford -- or some other amazing school. Am I right?

Now, what has everyone been telling you that you have to do to get into one of these schools? (Certainly nothing like what that free-spirited kid is doing in the photo, am I right?)

The formula probably looks something like this: get perfect grades and test scores, enroll in as many AP classes as you can (and get 5s in all of them), sign up for a million extracurriculars, make sure you're the leader or the captain of at least 3 of them, and volunteer like crazy in all of your "free" time.

We're not even going to talk about your mental health after trying to accomplish all of this. But let's say you follow this formula.

Do you know what your chances of getting deferred or waitlisted are? In 2014, Stanford waitlisted 659 students out of more than 42,000 applicants. And you know how many they chose from the waitlist? Seven. That's it.

The point is that with the acceptance rates at the very top schools plummeting to 5, 6, 7 percent, there is no way that old formula of perfect grades and test scores and a million time-intensive extracurriculars is going to work anymore.

The truth is that if you follow this formula, you end up spending so much time trying to reach perfect grades and test scores that you have no time to develop what's unique about you. Sadly, next to every other high-achieving student, you're actually going to look average if all you have is strong grades and test scores and the usual extracurriculars.

So you know what happens? The schools don't want to outright reject you because you're obviously so accomplished, but because they don't see anything new and different, the colleges end up bumping your incredibly hard-working self onto the waiting list.

Now, some of you are probably panicking right now and thinking, "This is impossible. It's just too competitive."

I get it. But let's pause for a moment. Because I actually have some great news.

You want to know how to get around this crazy competition? It all comes down to one thing: Finding out what lights you up and then building this passion into something truly substantial that makes a difference in the larger community. That's it. Really.

Now, that means that you want to get started early. If you're already a junior, then time is a little short. But that doesn't mean you can't stand out on your applications.

In fact, sometimes all you need is to tell an amazing story, a story that really communicates HOW you're unique and lit up.

Let me tell you about my student Brian. Brian came to me a little over a year ago because he'd gotten deferred when he applied early decision to Cornell. And he wanted to know if there was anything he could to tip the balance in his favor.

So, we sat down together and took a look at his application, and I could see right away what the problem was. His SAT scores were slightly on the low side for Cornell, but if they were too low, he would have just been rejected.

The real issue was that his application didn't fully reflect his passions and his ability to impact others. It turns out that he had written his application in a fairly conventional way, the way his guidance counselor had recommended, and as a result, all of his best qualities weren't able to shine through.

So I told Brian that he needed to write a much more personal and compelling story. And for the next week, we worked closely together to rework his application, which he resubmitted to Cornell. He also submitted a new set of applications to his regular decision schools based on everything we'd done together for his Cornell application.

And it worked like magic. When his results came out last spring, he found out he'd been accepted at Cornell AND at MIT.

Now, the thing is that he didn't get accepted because of his perfect grades and test scores. He had a decent GPA, but he certainly didn't have a 4.0, and his SAT scores were actually on the low side for Cornell and MIT.

He also didn't have a million extracurriculars. In fact, he had just two: he was part of his school's robotics team, and he volunteered at his local farmer's market on Saturdays. That's it.

Now, remember, most people would think that a student like this wouldn't get accepted. Not with these crazy competitive acceptance rates. After all, he didn't follow the formula of perfect grades and test scores and a million time-intensive extracurriculars that everyone says you need.

So, what tipped the balance?

Well, his application went way above and beyond his grades and test scores to show that he was passionate, thoughtful, and deeply caring. In other words, his best qualities shone through -- and that is what ultimately got him a yes at two very fine institutions.

So, what did we just learn? The key to admissions at your top choice school isn't perfect grades and test scores and a million time-intensive extracurriculars. Rather, the key is to communicate your passions and your ability to impact others in your own way, the way that no one else can. Now THAT is what college admissions officers are looking for.

So, what's one thing you can do right now that will increase your chances of acceptance?

If you're a freshman or a sophomore, I want you to start asking yourself what interests you, what lights you up, what kind of problems you want to solve in the world.

And then I want you to go find a mentor, whether that's your parents or a teacher or another adult, who can help you figure out how to build your interest into something substantial that makes your community better. You can read a lot more about this here.

On the other hand, if you're late in your junior year or you're already a senior and you haven't yet submitted your applications, the real key to your applications at this point is to put together an amazing set of application essays. I have a really helpful video on the top five elements of a winning application that you can watch here.

Most important, be like that kid in the photo above. Find a way to be authentically you and have fun as you prepare for and apply to college. If you develop and express your unique qualities, rather than trying to follow the old perfection formula, you are far more likely to get that YES you're looking for.

Elizabeth Dankoski has been working with elite students as a private tutor and college consultant for 15 years. Her unconventional approach -- breaking away from perfection to pursue passion -- has helped her students gain acceptance to all of the nation's top schools: Harvard, Caltech, MIT, Columbia, and Yale, among many others. Learn more about how 100 percent of her students are accepted into the nation's top schools here.

Educational Pathfinder: Transforming the way we prepare students for college — and LIFE