In 2012, the Republican Party lost the Latino vote badly, in a year of record Latino turnout. According to the Latino Decisions-impreMedia November 2012 election eve poll President Barack Obama won 75 percent of Latinos to just 23 percent for GOP presidential nominee Mitt Romney. Seems like those were the "good ol' days" for the GOP compared to where things stand in 2015.

Following the 2012 election the Republican National Committee released a comprehensive report examining what went wrong in the Romney campaign. Among the top concerns: outreach to Latino voters. The report stated, "If Hispanic Americans perceive that a GOP nominee or candidate does not want them in the country (i.e., self-deportation), they will not pay attention to our next sentence. It does not matter what we say about education, jobs or the economy; if Hispanics think we do not want them here, they will close their ears to our policies."

New polling released by impreMedia and Latino Decisions finds that the GOP's image among Latino voters has significantly deteriorated since 2012. 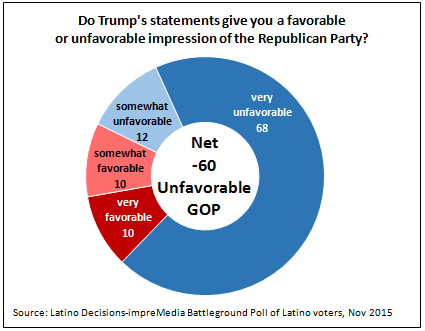 Perhaps the most noteworthy finding of the new poll is a question on perceptions of Republican outreach that Latino Decisions has been asking for years.

Fast forward to 2015 and the numbers have changed dramatically. As of November 2015, the impreMedia-Latino Decisions battleground poll finds that 46 percent of Latinos think the Republican Party is hostile towards Latinos, 39 percent think the GOP doesn't care too much, and 16 percent think they truly care. This is 27-point increase in the number of Latinos who perceive the GOP to be openly hostile towards its community. 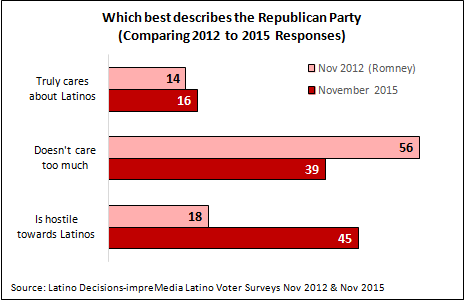 When Romney ran, he professed support for Arizona's SB1070 and infamously called on undocumented immigrants to "self-deport." Those comments were tame by today's standards. Trump has called Mexican immigrants rapists and killers. Carson has called for drone strikes on the U.S.-Mexico border. The candidates have bragged about wanting to end birthright citizenship, using the offensive term "anchor-babies." Ted Cruz led the charge against immigration reform in 2013 and has criticized President Obama for "releasing violent criminal illegal aliens." Even one-time reform supporter Marco Rubio now says he would end DACA and that he does not support DAPA, two policies that aim to protect millions of immigrants from deportation and family separation.

For many Latino voters, these anti-immigrant attacks hit close to home. In a March 2013 national survey of Latino undocumented immigrants, 85 percent said they had family members who were either U.S. citizens or legal permanent residents. And in a June 2013 survey of Latino voters, fully two-thirds said they personally knew an undocumented immigrants and for half of those it was someone in their family.

Perhaps most offensive of all, Donald Trump called for a repeat of the brutal deportation program of Eisenhower, then coined "Operation W--B---" a terrible racial slur against Mexican-Americans, and went on to call for new massive "Deportation Forces" to find, detain and deport millions of immigrants today. When asked about U.S. born children he said he would deport them also, to "keep the families together" by deporting parents and children alike.

Adrian Pantoja is a Senior Analyst at Latino Decisions and Professor of Political Studies at Pitzer College at the Claremont Colleges. He is the co-author of Anti-Immigrant Politics and Lessons for the GOP from California.