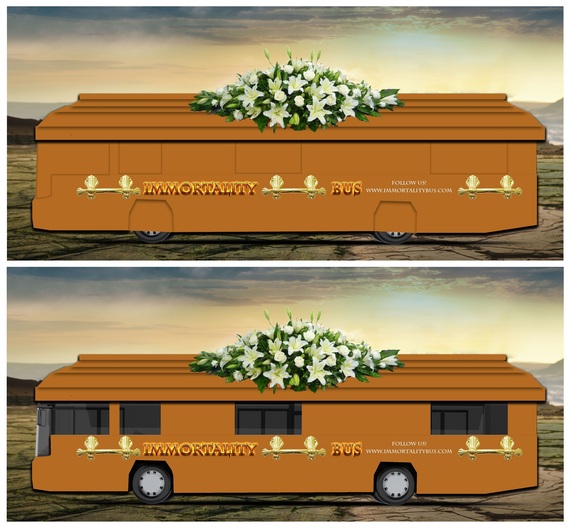 Since the beginning of recording history, it's always been assumed humans could not escape death and the grave. Yet in the 21st Century, millions of people around the planet are coming to the startling revelation that modern science and technology may soon be able to overcome human mortality. This has not escaped the media, which is increasingly reporting on this phenomenon.

Radical longevity science is sound. Recent studies in mice have shown aging is something that can be slowed down, stopped, and most likely even reversed. Longevity activists and transhumanists -- those that want to use science and technology to radically improve the human being -- are very excited about this and hope to have the choice to live indefinitely in the near future. In fact, as the Transhumanist Party's 2016 US Presidential candidate, I'm basing much of my campaign on spreading the word that aging should be treated like a disease -- and not destiny. And I hope to effectively spread this message by driving a 40-foot bus that looks like a giant coffin across America -- a stark reminder that aging and death affects us all unless we do something about it.

On my tour called the "Immortality Bus," I'm hoping to share with others that we should support a society and culture that is strongly pro-science and pro-longevity. My team and I plan to have embedded journalists aboard the bus, documenting our trip and enlivening the conversation.

Unfortunately, many people in America and around the world -- especially those who believe in afterlives -- are neutral or even oppose stopping biological death and aging with science. They feel it challenges what is natural in the human species. Transhumanists call these people "deathists," those who believe and accept that death is a desirable fate. 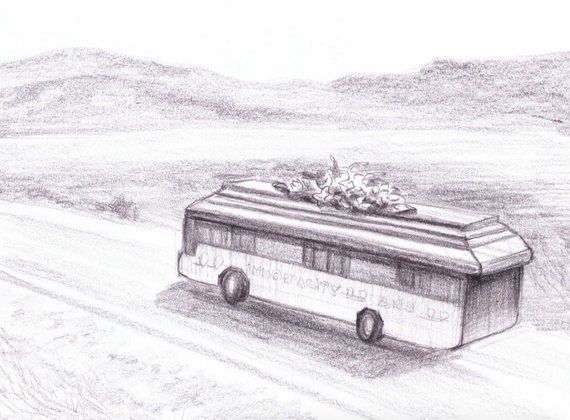 Drawing of the Immortality Bus on the road -- Gigi Janelidze

Complicating matters for transhumanists is the fact that the 535-person U.S. Congress, the current U.S. President, and all members of the U.S. Supreme Court are 100 percent religious and believe in afterlives. Ultimately, this means the American government has little policy incentive to stop death or to put national resources behind life extension science to make citizen's lives far longer and healthier. As a result, nearly 7,000 Americans die every day (over 100,000 die daily worldwide), even though the science is literally out there to stop it. Longevity scientists and transhumanists believe this is an incalculable tragedy.

Reuters reports that renowned gerontologist Dr. Aubrey de Grey, chief scientist at SENS Research Foundation and the Anti-aging Advisor at the U.S. Transhumanist Party, thinks scientists will be able to control aging in the near future, "I'd say we have a 50/50 chance of bringing aging under what I'd call a decisive level of medical control within the next 25 years or so."

It's not just scientists who are advocating for much longer lives. A plethora of life extension and transhumanist activity has been occurring around the world recently. Google's company Calico was recently formed to fight aging. So was startup Human Longevity, a $70 million dollar company founded by longevity entrepreneur J. Craig Venter, X Prize founder Peter Diamandis, and Dr. Robert Hariri. Even billionaires like Oracle's Larry Ellison and Peter Thiel are putting money into trying to live indefinitely.

I'm hoping my Immortality Bus will become an important symbol in the growing longevity movement around the world. It will be my way of challenging the public's apathetic stance on whether dying is good or not. By engaging people with a provocative, drivable giant coffin, debate is sure to occur across the United States and hopefully around the world. I'm a firm believer that the next great civil rights debate will be on transhumanism: Should we use science and technology to overcome death and become a far stronger species?

The Immortality Bus will begin rolling down American highways in very late August stopping at rallies and events, instigating the kind of conversation America and the world needs to challenge outdated cultural ideals-- many which are holding science, technology, and medicine back. Robotic hearts, stem cell technology, designer babies, 3D printed organs, and gene therapy are all controversial, but we should pursue them nonetheless because they represent a chance at improved health for the species.

The biggest concern I expect to address on my bus tour is about overpopulation. It's a valid concern. However, I'm not overly worried about life extension science making the world more crowded. Many people assume just because humans stop dying, the planet will become way more overpopulated. But this is not necessarily the case. What many people don't consider is that technology -- according to recent reports at the World Bank -- has been raising the standard of living for the entire species over the last 30 years, and will continue to do so. As a rule, the higher the standard of living around the world, the less children people have. In fact, if people knew there were going to live far longer than a standard 75-year lifespan -- let's say maybe 500 years -- many probably wouldn't have children at all for the first few hundred years. Additionally, new green technologies on the horizon will allow us to better distribute the Earth's precious resources to make this planet more ecologically pristine again.

Science is on the cusp of achieving something monumental for human beings -- the possibility of overcoming death. The Immortality Bus is a striking symbol aimed at bringing the conversation of life extension science into the mainstream. Like the great bus tours of the 1960's that brought a culture of hippie love to America and the West, the Immortality Bus hopes to bring a culture of desiring far longer lifespans via science.

Perhaps the most important stop on my Immortality Bus tour will be at the U.S. Capitol building, where my team and I plan to deliver a Transhumanist and Life Extension Bill of Rights to the US Congress. The bill will advocate for government policy to support indefinite lifespans in our species, as well as the use of synthetic and robotic technology to live healthier and better.

The Immortality Bus is a humanitarian mission. In fact, it's transhumanitarian mission. We believe in the 21st century everybody has a universal right to a happy and indefinite lifespan, regardless of their heritage, age, or income. Our goal is not only to make your life and the lives of your loved ones better, but to do this for all the people on Earth.