One of the challenges that I have with my daughter Eliza, who has atypical Rett Syndrome, is her unawareness of others' personal space. She explores her world through touch, so when she sees something of interest, she reaches out for it. This becomes a difficult situation to manage while we are traveling, because we often find ourselves in lines, and I feel as though I spend a great amount of time apologizing to others because of her actions. What I have found more and more as I travel, however, is that others are actually quite tolerant of her actions. These strangers are often reassuring me that it is "OK" and that they understand. I see the most wonderful things happen as their faces warm and they begin to engage Eliza in conversation. They are accepting and they are kind and a flood of relief washes over me as I realize that it really is OK.

I recently took a trip to NYC with my children, and I encountered many wonderful moments with strangers in response to Eliza. One of my favorite moments was when we were in line at The Minskoff Theatre to see The Lion King. There were quite a few people waiting to be let in, and right in front of us were two women. I think they were mother and daughter -- maybe in their 40s and 60s. The daughter was standing directly in front of Eliza; she was dressed beautifully, with fancy shoes and glitter jewelry, and Eliza was mesmerized by her. She reached out to touch the woman, and as usual, I grabbed out for her hand -- but it was too late. The woman turned and smiled and then turned back around. A moment later Eliza did it again, and the woman turned around again and this time bent down to Eliza and said "Hello."

I saw that familiar warmth in the woman's eyes as she spoke to my daughter. A huge smiled came across Eliza's face, and she told the woman how much she liked her shoes. While the woman was speaking to her, Eliza saw that she had two beautiful "diamond" (rhinestone) bracelets on her wrist. She reached for them and expressed great appreciation for them. This woman and my daughter interacted with one another for a few minutes, and then the woman took off one of her bracelets and put it on Eliza's wrist. I told her that she did not need to do that, but she insisted. She told me that she hoped the bracelet would always remind Eliza of her time at The Lion King, and she knew that the remaining bracelet on her wrist would always remind her of Eliza. It was a truly beautiful moment. Eliza spent the evening admiring her new bracelet and showing it off to anyone and everyone who passed by her.

I think it is important for us as parents of special needs children to realize that the world is catching on -- that others are opening their hearts to these amazing children and their families. You, like me, need to realize that it really is OK, and that people are beginning to understand and appreciate our children, and embrace all of their differences. I am so pleased that my daughter, Eliza, can be an ambassador of sorts to start educating and empowering these people as we travel the globe together. 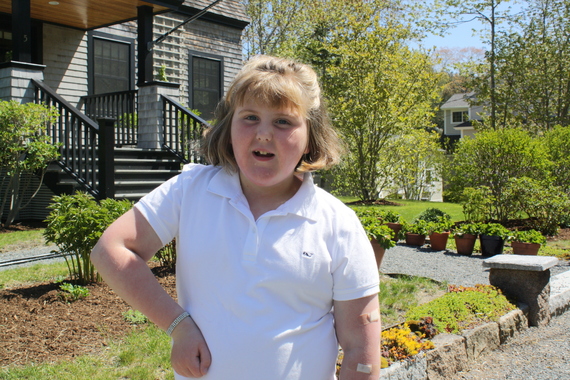 Co-Founder and CEO of SpecialGlobe