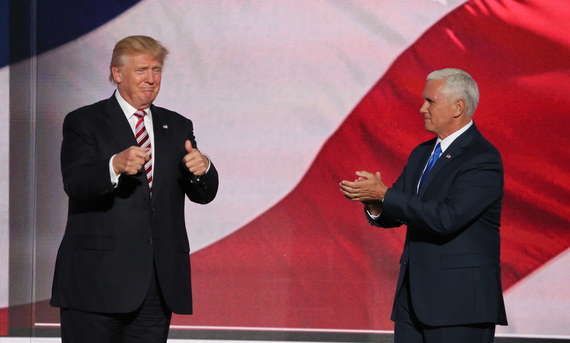 I watch the polls in the American presidential race go up and down with dismay.

My heart leaps when Hillary Clinton surges but seizes up when Donald Trump catches her or occasionally moves ahead.

My fear -- like that of many people around the world -- is that Trump, a demagogue who puts himself above his country, might actually win.

I live in Armenia, a small country thousands of miles from the United States. So why do I care who becomes president of the most powerful country on earth?

Because if Trump is elected, Vladimir Putin will be able to run roughshod across the former Soviet Union, including Armenia, and try to take back the Baltics, Poland and other ex-Soviet fiefdoms in Europe, such as Hungary and the Czech Republic.

Trump has given ominous signals about letting Putin have his way in the region.

He has supported Russia's takeover of Crimea, has asserted that there were no Russian troops in eastern Ukraine, and has hinted that the United States would abandon the Baltics if Russia invaded, even though NATO's charter requires Washington to help other members who are attacked.

I've been amazed that so many Trump backers have given him a pass on Russian aggression.

Those in the former Soviet Union who have long wanted democracy in our region admired Ronald Reagan, an icon of the American right, for standing up to Soviet leaders.

In fact, most of us believe Reagan's hard-nosed stance against Soviet totalitarianism was a key reason the Soviet Union imploded.

So we've been astonished so see the American right, to whom Reagan is almost a God, looking the other way when Trump has signaled he would let Putin run amok in the region.

Make no mistake about it: Much of the former Soviet Union would be vulnerable to Russian reconquest if Trump became president.

Armenia is the perfect example of a country in the region that can't sneeze without Russian permission -- the kind of obsequious vassal Moscow wants to see more of. Russia owns our electricity and gas systems, stepped in to squash our plan to join the European Union, and has two military bases on our soil to make sure we don't get uppity.

Two of the first countries that Russia would try to re-subjugate under a Trump presidency, it seems to me, would be Moldova and Georgia.

Putin could easily trump up a pretext to unleash Russian troops that are stationed in both.

In Moldova, Russian forces are in Transnistria, a pro-Russian enclave that is basically running its own affairs, thumbing its nose at the government in Chisinau.

In Georgia, Russian troops are in two pro-Russian enclaves -- South Ossetia and Abkhazia -- that the Kremlin took away from Georgia in the war of 2008.

The death of Uzbekistan's longtime leader Islam Karimov on September 2 improves the Russians' chances of forcing that country to do its bidding again.

Karimov, a tyrant whose regime was one of the world's worst human-rights violators, always feared a Russian attempt to re-establish dominance over his country -- so he kept Moscow at arm's length.

Unfortunately for Uzbekistan's chances of remaining independent from Moscow, Karimov failed to groom a successor.

The Kremlin will be sure to dangle inducements and to apply pressure on the new leader of Uzbekistan, former Prime Minister Shaukat Mirziyoyev, to try to get the country back in the Russian fold. Mirziyoyev will be unlikely to rebuff Russia as Karimov did -- at least for awhile -- because he needs time to consolidate his power.

Another country in the region that is vulnerable to Russian reconquest -- whether through military or more subtle means -- is Kazakhstan.

Its longtime dictator, Nursultan Nazarbayev, is 76, and has not announced a successor, although there are indications it could be his oldest daughter, parliamentarian Dariga Nazarbayeva.

Russian nationalists have contended for years that the northern third of Kazakhstan -- the world's ninth-largest country -- belongs to Russia, and they have called for seizing that territory.

Nazarbayev has worked hard to stay on Putin's good side, trying to avoid giving Moscow even the slightest pretext to march troops into northern Kazakhstan.

Astana's few flashes of independence have angered Putin, however. One of those piques prompted him to issue a veiled threat against Kazakhstan in 2014. Putin noted that Kazakhstan had never been an independent country until the collapse of the Soviet Union in 1991, a suggestion that Russia considered Kazakh territory up for grabs.

What do all these geopolitical tangles in the former Soviet Union have to do with Trump?

By letting Putin do what he wants in the region with impunity, Trump would be complicit in Russia's re-enslavement of countries there.

I have heard many Western Europeans say they're terrified that a Trump presidency would embolden Putin to try to put the entire continent under his thumb.

Think how much more fearful those of us in the former Soviet Union are about the possibility that a Trump presidency would prompt Russia to try to re-enslave us.