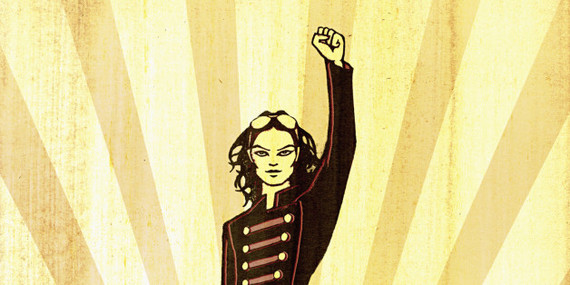 The other day a woman in the checkout line at the store (oh fine -- it was Walmart) asked me if I was voting in the upcoming election.

Finally. Here was a woman, let's just call her Helen, encouraging other women to vote. Together we could shut down a sexual predator who wants to roll back women's rights! I felt like high-fiving her.

Helen inspected me, and my shopping cart (organic apples, Greek yogurt). "You're probably voting for Hillary," she said with disgust.

Oh. I stood straighter. "Yes, I'm voting for Hillary," I said. I shifted slightly away, hoping that was it.

But Helen raised and drew her bow, asking loudly, "I suppose you believe in partial-birth abortions?"

I was stunned. It was like the internet, but the words were coming out of a face.

Not only was Helen the first unabashed woman Trump supporter I'd encountered, she was also the first woman I'd met who didn't support a woman's basic right to be anonymous in Walmart.

I didn't want to be there, much less discuss abortion. I only have political conversations about complicated issues when it's with someone who respects me, makes me feel safe and calls me the next day.

But this woman was now in my life.

"Partial-birth abortions aren't really a thing," I said, all credit to Samantha Bee.

It's true. The term was coined by conservatives for late-term abortions, which actual doctors call a dilation and evacuation procedure (D&E).

The customer behind me (Diet Coke, Ritz crackers) exhaled. Helen countered with graphic details that I won't repeat.

Let me just unpack this a little. Trump, like many conservative politicians before him, uses late-term abortion to further inflame and divide the electorate. He says that under the law medical practitioners can "rip the baby out of the womb," even up to an hour before birth. Obstetricians have called Trump's remarks absurd. Rebecca Traister, a feminist and Hillary supporter, has pointed out why "Abortion an hour before birth is not abortion."

Late-term abortions usually happen because earlier abortions are hard to get. According to the CDC, low income women are often unable to have them earlier due to financial obstacles and lack of access. Teenagers may be delayed by parental involvement laws. Sometimes girls don't suspect they're pregnant until later, much less have the resources to make an informed decision.

The Big Orange Elephant in the Room

This isn't just about abortion. Well before Trump switched from identifying as pro-choice to whatever he is now, he was busy honing a reputation for ranking, shaming, grabbing and insulting women and young girls. And it's still raining allegations of assault and rape as more women come forward.

Republican women may find Trump repulsive, but agree with him on immigration, taxes, or whatever their core issues are. I get that. But a Trump administration will build that wall or it won't. It will lower taxes on the wealthy or it won't. Meanwhile, this man shows us again and again that he only wants to violate our bodies and our rights. There couldn't be more of a core issue than that.

Women who vote for Trump are voting against themselves.

The Best We Can Do

Back at the checkout line, Helen accused me of not being a Christian. She had put me into a box destined for a warmer climate. But she paused.

"Give me one good reason," she said. "Why Hillary?"

I could have said that my daughters should know that women can become presidents, and racist demagogues who brag about violating women should not. That all girls and women should have access to healthcare and the freedom to make decisions about our own bodies, including who can touch us, where and when. I could have told her that as women we should unite around commonalities and solve problems. We're women, after all.

But Helen had me under the gun -- and she could have been packing one -- so I just said, "I'm a Democrat."

Not my best work. I guess I was just as entrenched as she was.

After paying for her stuff (pumpkin-spice cereal, air-freshener) Helen told me she would pray for me. I believed her.

Helen, here's a prayer. May we, without our shopping carts, away from the shiny rows of Tic Tacs, find some common ground. No matter who wins, we need to unite to put this country back together. We can start now. Give us strength.