Hiphop artists and women get away with salacious performances all the time without an uproar. Of course, there was that famous Madonna-and-Britney kiss that caused a stir, but that was likely because the artists were – well, Madonna and Britney.

And yes, Adam Lambert, your performance on ABC’s American Music Awards this week was not really all that raunchy. A kiss is a kiss, and there’s nothing wrong with that. I could have done without you sticking a guy’s head in your crotch spontaneously, but it happened so quickly, and in the midst of so many other things, that if the dancer didn’t mind, I’m not sure “offensive” is what I’d call it.

What I’d call it, instead, is misguided. 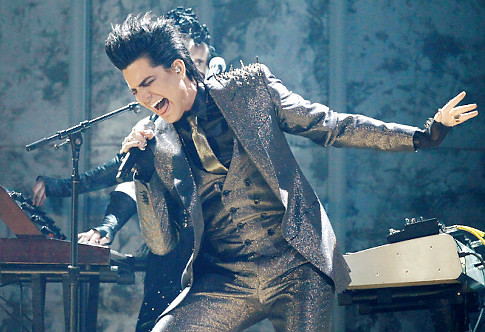 You told Out magazine that you didn’t make a big deal out of your sexual orientation during American Idol once pictures of you kissing a man had been exposed because:

“I don’t understand why it has to be about my sexuality. I’m just not going to talk about it one way or another. . . . And then when those pictures came out, I was like, you know what? I thought maybe I’ll just own it and say, ‘Yeah, I’m gay.’ But I didn’t want to label myself.”

And so my problem is with the timing.

You see, Adam Lambert, you may say that “I’m not trying to lead the fucking way for the civil rights movement that we’re in right now,” but the fact is that we ARE in a struggle for our civil rights and you are a pop culture figure (thanks in no small part to the support of gays and gay allies.)

We are in a dangerous moment. Our political allies are quickly backing away from us, thanks to losses on gay marriage in California and Maine and the Democratic loss of the governorship in New Jersey.

Whereas just over a year ago it seemed like gay marriage was an inevitable wave sweeping the country - and a tsunami in New England, New Jersey and New York – now it feels like the tide has turned. The hate crimes bill victory was followed by a vicious hate crime in Puerto Rico. We have hearings on ENDA, which could go either way. We have Don’t Ask, Don’t Tell hearings which are being put off until 2010. We have a President who isn’t sure he is our friend.

And what is the mainstream most worried about, Adam Lambert? Why are they afraid of our partnerships, our service to our country, our working lives, our families? They are worried because they think gay life is exactly what you portrayed on the American Music Awards: focused on the kind of sex that turns people into animals (almost literally, in this case, with crawling dancers leading you on leashes), geared toward enticing children (ABC is a network owned by Disney, for heaven’s sake), degrading, rapacious, empty.

This is why mainstream America votes against gays, Adam Lambert. Not because of people who have families and jobs and bills and weddings. Because of people like you, who use sexuality thoughtlessly in order to advance your own agenda, instead of thinking about the very real consequences your actions will have on others’ civil rights.

If you were a private citizen, this wouldn’t matter. But you are not. You are able to be openly gay thanks to people who did, in fact, make it their life’s work to “lead the fucking way for the civil rights movement.” You dishonor them – and you hurt all American gays and lesbians – by pretending otherwise.