The news of Jewish Senator Sanders winning the Michigan primary mainly due to the support of Arab Muslims in Dearborn, MI swept the nation a few weeks ago. It was seen as a sign that religious differences can be overcome in the United States, and that presidential candidates can and should be supported regardless of their religious background.

I'm not under any illusions that Americans will forget faith differences overnight. What's grievous is that rather than attempting to move away from religious strife, some presidential candidates are fueling interfaith fires. The exit polls in the most recent "Super Tuesday #3" Republican primaries show an immense support for Mr. Trump's proposal to ban Muslims from the U.S. 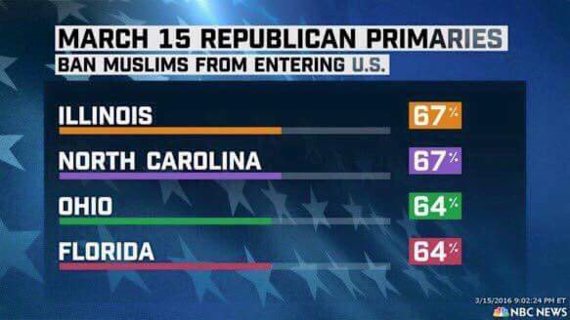 This "us-versus-them" mentality is more dangerous that we know. Being American Muslim, it grieves me beyond words that my loyalty and patriotism to my country is questioned at the airport, the grocery store, at my kids' school and now even at the election polls. I feel frustrated that I have become the bogeyman even though I spend literally every waking moment talking and teaching interfaith tolerance and love for other religions. I feel like all my work has no value in front of the hatefully bigoted and utterly false rhetoric spewed by those who dream of becoming president of this great country of ours. Apparently, living a life of love, friendship and tolerance means for naught against uneducated and misinformed people who make their livings rousing hatred in others.

The worst part is that "Muslims as outsiders" aren't even a reality. Muslims come in all colors, ethnicities and cultural backgrounds. Have we all forgotten that Muslim slaves were a significant part of the slave labor that literally built these colonies and then the newly birthed United States of America? Have we forgotten that until a decade or so African Americans were the largest Muslim group in the U.S.? Do we know or care that a growing number of white and Hispanics are embracing Islam? Are we aware that those we think of as Muslim could be Hindu or Sikh or even Catholic nuns?

Yet some among us see a brown person and feel the urge to yell out "go back home!" not understanding that this is our home: this beautiful country that we all live and work in together. Increasingly, it is becoming very clear to me that something has to be done. It is no longer enough to sit back and ignore the nasty comments, the news out of Fox channel and the words out of some presidential candidates' mouths. It is no longer enough to hope and pray for the best. It is time people of faith -- and no faith - -came out with a very strong message that hate and intolerance against religions, races or sexual orientation has no place in American society. We are above this, we will rise above this, but only if we all do our part.

And what is it we can do? Here are some suggestions:

1. Go out and vote, if you are able to. Millions are ineligible to vote this year, so please know how valuable every single vote is.

2. Protest and demonstrate legally and without resorting to violence or even verbal abuse.

4. Write articles, talk to you neighbors, answer questions. Be available. Be friendly.

5. Start interfaith and intercultural circles in your homes, colleges, neighborhoods. Invite speakers from other faiths to share their beliefs. Get rid of the "us-versus-them" mindset.

At the end of the day, there is no "us-versus-them". We are all "us" because we are all in the same boat called the United States of America. If we sink, we all sink together, and if we float to the shores of a more tolerant and loving landscape, we all do so together. It's not enough to condemn in our hearts any longer. It is time for all faith-loving people to rise up together and say, "hate doesn't define us, love does, understanding does."