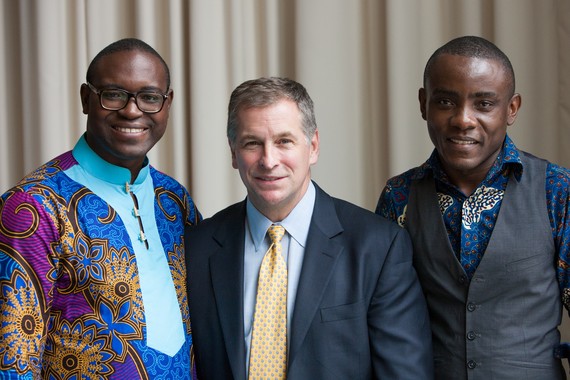 In February, Ugandan President Museveni signed a bill into law criminalizing lesbian, gay, bisexual and transgender (LGBT) people and punishing anyone who supports LGBT equality with lifetime imprisonment. Amidst the enthusiastic applause at the bill-signing ceremony, LGBT Ugandans were unable to leave their homes, fearful of their safety.

In Russia, a law was passed against "gay propaganda" that has made it virtually impossible to advocate for justice for LGBT people and has opened the floodgates for a wave of targeted violence. Already, multiple arrests and brutality against LGBT people have dotted the news headlines on the lead up and duration of the 2014 Sochi Winter Olympics.

In the wake of Nigeria's passage of a law similar to the Russian one in January, police "round ups" of gay men are occurring simply because of their sexual orientation.

And Gambian President Yahya Jammeh recently said, "We will fight these vermin called homosexuals or gays the same way we are fighting malaria-causing mosquitoes," which, it is worth noting, is through widespread systematic efforts aimed at extermination.

As barriers to legal equality seem to be falling like dominoes in the United States, it's easy for LGBT Americans and their allies to feel a sense of giddiness. But even as the momentum in the U.S. seems to be accelerating in the right direction, a disturbing countertrend has emerged in other countries, where justice for LGBT people is being dismissed as a "Western" assault on "traditional values" and alarming new laws are literally threatening the very lives of LGBT people and their allies.

"Why is this our problem?" one friend told me recently. "Don't we have enough battles to fight here at home?"

On one level, my friend is right. In 29 states, you can still be fired from your job for being LGBT. In most states, we still do not have marriage equality. There is an epidemic of violence towards LGBT people -- especially against transgender women of color -- even in states where legal protections exist. The United States is hardly paradise for LGBT people.

So why should we care about places like Russia, Nigeria and Gambia?

One reason is that our country is partly to blame for what's happening in the rest of the world. It seems that one so-called "Western value" that transports well across national boundaries is anti-LGBT prejudice, which is being actively spread by American extremist groups throughout the Global East and Global South.

Anti-LGBT activists here at home, such as Scott Lively, are in the literal business of exporting homophobia and transphobia overseas. Mr. Lively has been intimately involved with building support for and even crafting anti-LGBT legislation in places like Uganda and Russia. In February, he announced the formation of an international group solely meant to expand upon similar efforts and backed by more than 70 anti-LGBT activists, including Oklahoma State Rep. Sally Kern.

Our fellow Americans have helped create the problem; we bear some responsibility for cleaning up their mess.

But there is a larger reason we have to get involved. We are not just citizens of the United States; we are citizens of the world and belong to a global community that includes millions of LGBT people. We owe it to them to stand with them when they are oppressed. In the 1970's, when Soviet Russia upped its repression of Jews, the American Jewish community took action and fought for their fellow adherents. In the 1980's, when the South African government seemed to be unrelenting of its commitment to apartheid, an American movement with prominent African American leadership took root and helped to enact sanctions that eventually brought apartheid to its knees. Should LGBT people and allies in the US decide to say "never again" to global homophobia and transphobia, we will follow in a proud tradition of other communities who have done the same.

I don't want to minimize the struggles we still face in the U.S. But LGBT people living in the U.S. are not grappling with the passage of laws that would empower the government to take away our children or lead to life imprisonment because of our sexual orientation. We need to support LGBT people abroad.

Baby Boomer children often asked their parents, "What did you do during the War?" Similarly, future generations will look back on this time of international crisis and ask us, "What did you do?" We either must act, or be remembered in shame for doing nothing to end this mounting persecution. LGBT people are part of our world, and we here in the U.S. need to start acting like it by fighting repression wherever it occurs -- not just here at home.