I was the only black person at the table. At least 15 others gathered with me for dinner at a lavish country club in a Cleveland, Ohio suburb. I was a guest of a friend and enjoyed the trivial chatter as a gentle breeze rolled over the patio.

About an hour in, a 60-something-year-old man began an upbeat conversation about LeBron James. "I just don't know how he made it, he beat terrible odds, it's just incredible!" He said.

Others cheerfully agreed. I did too, but I had some questions.

"What odds are you talking about?" I asked. The man scooted back in his chair. "He's just so sensational," the man talked about LeBron's fatherless childhood and other hardships. It appeared that he was touched by the basketball phenom's humble beginnings. The jovial guests at the table simmered down. "I just can't understand how he made it through all of that," he said quietly.

"Why is it so hard to understand?" I leaned in and inquired.

One couple left the table.

"He was born to a teenage mother, he had it hard, just look at him now," he said.

"I was raised by a single teenage mother, no father in sight," I said calmly as I shared a bit of my backstory.

My well-intended comments seemed to quickly clear the table. People don't want to talk about it. Everyone moved on. Some escaped to the bar while others hit the dance floor for their version of the electric slide. But there we were, me and this white man connecting over steak, a sunset and being black.

He teared up and said, "But how, I mean why, I mean you look-." He tried to ask something but it didn't (or couldn't) come out. He seemed to be overwhelmed or in shock or perhaps both.

I told him that plenty of black women and men come from backgrounds similar to LeBron James'. "We just don't get the million-dollar contracts or instant fame," I assured him. "You don't read about us but we're out there, a lot of us beat the odds, we have success stories."

The man and I connected during that brief conversation. Our paths crossed.

Over the past week the killings of Alton Sterling and Philando Castile have once again called us all to a crossroad. The tragic news of several Dallas police officers murdered is calling us all out. Like at that table, some will turn their heads while others try to make sense of the situation.

We've been here before.

We've watched grainy cellphone videos of police killing black men. We've heard all the arguments already. Little has changed since the shootings of Tamir Rice, Freddie Gray or the 1991 beating of Rodney King.

On one of my recent Facebook posts people fired off opinions. Some outright called Castile's shooting racially motivated while others rejected the notion, claiming the police mishandled the situation. Then there was another category of folks who didn't want to get involved, they remained silent. Newsflash: We're all involved! The problem of black men being shot and killed by police officers affects us all. Because it affects us all, silence is not an option. 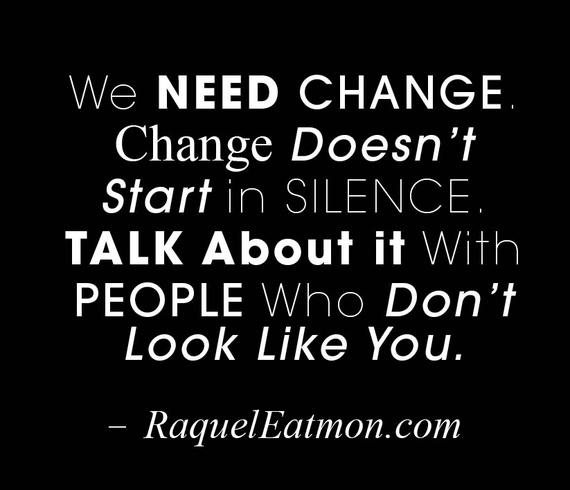 When I shared notes from that dinner with my black friends, all three said it was a mistake, citing shame and of all things: pride. I told them the gentleman wasn't discounting black people, I believe he just didn't know. I believe that in his circle of folks who look like him, they don't discuss it. We all do it. I'm tired of doing it. We stay within our circles while discussing heated topics. We complain to a complaining audience. How can we learn and push for change by staying in a black or white bubble?

If blacks want other races to understand why racism falls into the narrative of stories like Sterling's, then speak up. Saying, "Black Lives Matter" doesn't explain much. The onus isn't solely on black people though, people of other nationalities should take initiative and plan to be part of the conversation too.

How does this ignite change? Empathy. Shared empathy. We've got to engage differently, both sides: Blacks and whites must help each other see varying points of view. It's a collective decision to talk about racial disparities and past (and current) conflicts. Make it relevant. Keep it relevant. All of us should consider bursting our bubbles with an intentional urgency to expand our social consciousness. My request here isn't a preachment on morality but a lesson in humanity. Dr. Martin Luther King Jr. said, "We must learn to live together as brothers or perish as fools."

Next, we need to go deeper. Black men must be humanized not just by police departments but by society as a whole. Black people are like all people, wanting to be treated equally. All blacks should be validated, not just the Beyonces and LeBrons but A-L-L blacks.

From there we need to trace the vessel of the this (oftentimes manufactured) fear felt by some whites and pinpoint its source.

I generally stay within my wheelhouse of women's empowerment and optimal living but if I stay in that box today or at that dinner table, then I, too run the risk of staying silent.

It's a sensitive topic, I get it. People are going to get uptight- so what? Let's get uptight. The risk of holding these conversations hostage are far too great. 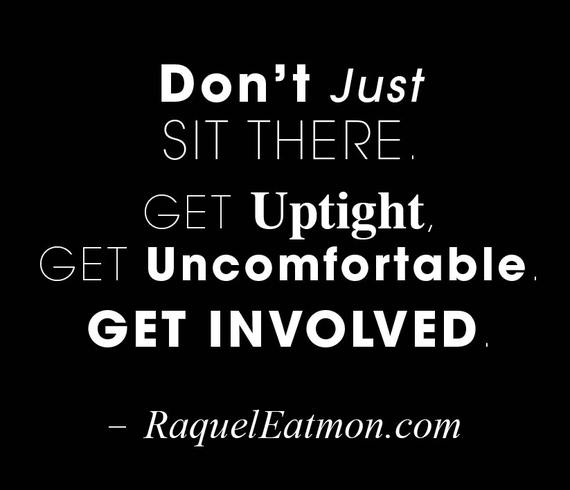