At the present time only six U.S. states allow adopted citizens unrestricted access to their own authentic birth certificates (AL, AK, CO, KS, ME, OR). Eight other states allow access but with restrictions that do not apply to non-adoptees in those states.

Oregon, which granted adoptees access to their birth certificates nearly two decades ago, has now gone a step further and become the most liberal state for citizens born there and adopted. A 2014 law allows both adult adoptees and birth parents access to all court documents pertaining to their adoptions. Parents whose children were taken by the state need a court order. All others just need proper identification.

Advocates in states that do not have unrestricted access are challenging the archaic laws that create a second-class citizenship for adoptees.

Up-to-date state-by-state legislative information and details are maintained by the American Adoption Congress:

•Adoptees (with few exceptions for international adoptees whose parents failed to file proper paperwork) are citizens of the United States who vote (and many have served in the military.) As such, the 14th Amendment requiring all laws to apply equally to all citizens should apply. 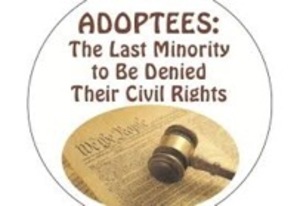 •Even convicted felons have access to their birth certificates.

•Adoptee access is supported by all experts in the fields of social work and child welfare.

•No state which has granted adoptees access to their birth certificate has seen a decrease in adoptions or an increase in abortions, this despite adoptee access being opposed by some Catholic Charity adoption agencies who believe that mothers-to-be would choose abortion rather than know their adult children could find them some day.

•Adoptee birth certificates were originally sealed for the following reasons:
--to protect the adoptee from the stigma of illegitimacy - a problem that no longer exists.
--to protect adoptive families from intrusion of birth parents. They were never, however, sealed to protect birth parent anonymity as is claimed by The National Council for Adoption which represents adoption agencies businesses and adoption attorneys.
--pushing to seal adoption records were baby brokers such as the notorious Georgia Tann in order to conceal unethical practices. Today, the adoption industry lobby still opposes openness.

•Mothers were never promised confidentiality from their own children and never could have been because the records are not sealed upon relinquishment or termination of rights. The original birth certificate is sealed only if and when an adoption is finalized. Parents who have relinquished their parental rights or had them terminated are not party to any subsequent court proceedings and do not know if their child is adopted or not but the records remain unsealed if she or she is not adopted. 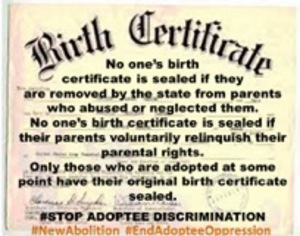 •Adoptees and their original families have been searching and reuniting even in states that have sealed record laws and long before the Internet existed. Today, DNA testing can lead to the truth of one's origins without access to a birth certificate. Adoptees and their original family members are finding one another via social media which is far more public than it would be with access to birth certificates.

•Prior to the 1930s no adoption records were sealed and it caused no harm. Nor has harm been caused in Kansas or Alaska, where adoptees' original birth certificates were never sealed. No one in either of those states - or the states which have allowed access since - ever complained about their privacy being violated.

•Other countries such as England allow their adopted citizen access and it has caused no harm. 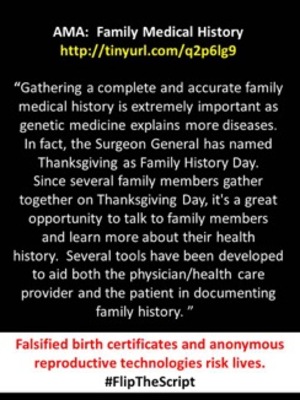 •Withholding adoptees access to their original birth certificates denies many American-born adopted persons the ability to obtain a passport because the filing date is often a year or more after the date of birth.

•Genealogy is one of the most common pursuits based on normal and natural curiosity about one's ancestry, kin, heritage and lineage, all denied adoptees who are subject to sealed records.

•Unlike the LGBT community who can relocate to more friendly state, adoptees are forever bound by the laws of the sate in which they were born.

•It's also natural to want to know WHY you were given away.

•No adopted person asked to be taken from their families or adopted.

•We claim that adoption is "the same as if the child was born into his family" - yet those born into their family know who gave birth to them and they have unaltered birth certificates.

•We tell mothers that adoption will provide a better life for their children - not a life that will deny their children the same rights as their non-adopted peers.

•Most domestic adoptions today are open, yet even those begin with sealed records in most states, as do step-parent adoptions.

•Four times as many adoptees attempt suicide as compared to non-adoptees and a disproportionate number are found in all types of juvenile and adult facilities. Being lied to and treated like second-class citizens may contribute to feelings of rejection and abandonment.

•A birth certificate is a VITAL record and as such should never be tampered with and falsified as is done by issuing an "amended certificate claiming the adopted person was born to his or her adoptive parents. To do so is state-committed fraud.

We are a nation that prides itself on equality, guaranteed by the 14th Amendment to the constitution that ensures laws are applied equally to all citizens. Yet adopted persons are unjustly discriminated against in regards to access to their own original birth certificates.

Adoptees in every state deserve no less than unconditional unfettered access to the vital record of their birth. We cannot continue to perpetuate this prejudicial egregious wrong. Prospectively, we must cease sealing adoptee birth certificates as if their birth were a shameful secret and we need to stop issuing false documents called "amended" birth certificates that fraudulently identify adoptive parents as the parents of birth.

We cannot promote adoption and claim it to be the same as if the child were born into his new family and deny those who adopted equality as American citizens.