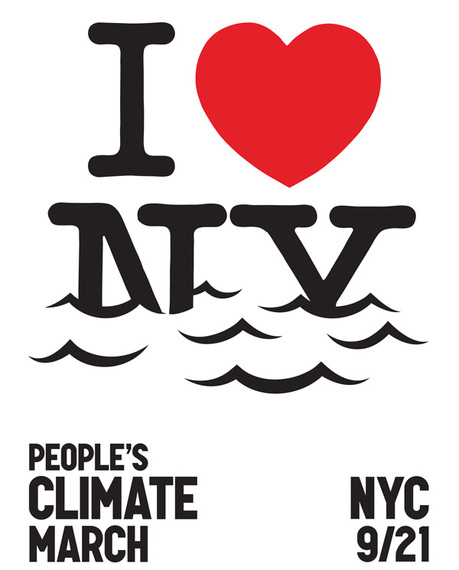 As someone who writes about climate change, I can readily tell you about biodiversity losses on the Amazon, declining polar bears in the Arctic due to melting glaciers, surging wildfires in Colorado, and the parching drought in California. These climate change stories are sadly happening, and they worry me greatly.

But these are not my stories. Climate change is personal.

I'm a New Yorker. Living in NY is what I can speak from the heart about. We're a tough bunch and along with the rest of the world, we're taking a beating from climate change.

So I'm going to tell you my story. Why I am marching to protect what I love, my New York.

Long Island -- I love my place of birth, where I spent my childhood. The warming of the oceans, caused by emissions trapping heat in the atmosphere, is making the seas around the Island rise faster than the global average. Beach erosion has become fast and furious. Some beaches where I once played in the sand with my dad are under water. Many of my relatives still live on the Island and they continue to suffer from the effects of Hurricane Sandy, as they struggle to rebuild their lives after the hurricane engulfed their home. Scientists predict Long Island will have shorter, wetter winters, with seas rising and storm surges so strong they will surly threaten beaches, salt water marshes and infrastructure.

The Catskill Mountains -- I love these pristine mountains that I gaze at every day with their unspoiled streams and pastoral scenes. Local storms are getting more and more severe, rainfall is getting heavier, droughts are getting dryer, and flooding is on the rise in the region. With mounting evidence that fracking contaminates water and air - and methane exacerbates and accelerates climate change, I worry that natural gas development will wreck the beauty and health of the natural environment of the Catskill region.

The Hudson River Valley -- I love my home of over 30 years. When Hurricane Irene dropped over 11 inches of rain in 24 hours on the Valley, many of my neighbors were left homeless. I was lucky, with only the headache of a damaged basement. The Hudson River is a tidal estuary. This makes it especially vulnerable to sea level rise and flooding. The estuary covers from Troy to New York Harbor. I live smack dab in the middle; just a stone throw away from the river. Slight temperature changes impact organisms and ecosystems. Due to warming temperatures, the rich landscape of the Hudson Valley has been impacted by the spread of invasive species. My home has become a stomping ground for ticks that spread disease. My children have both been bitten by ticks and have had complications from Lyme Disease. Climate change projections continue to surge northward as previously chilly zones turn balmy making pest populations habitable.

I love my New York. It's not the only reason I'm hitting the streets on Sunday to march, it's my personal reason. And as Billy Joel croons, "I'm in a New York state of mind."