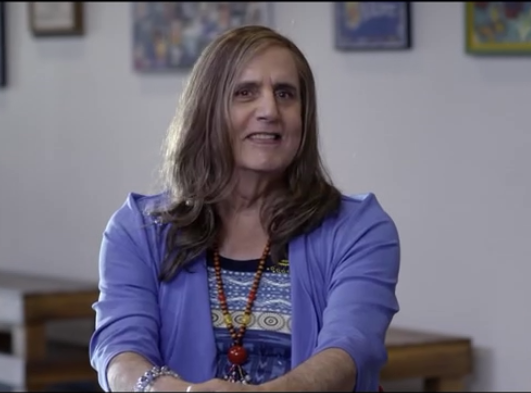 Whether you're transgender or not, Amazon's new series, Transparent, will suck you in like the display case at Georgetown Cupcake. You'll find yourself lying in bed at midnight, clutching your TV remote and rationalizing "one more" that will likely turn into two or possibly three more should you suffer from insomnia like I do. But I promise: unlike a good cupcake binge, you won't hate yourself afterward.

Jeffrey Tambor, is phenomenal in his role as Maura, the 68 year-old patriarch-turned-matriarch of the Pfefferman clan who finally begins her transition while officially coming out to her ex-wife and three adult children, each one dysfunctional in their own way. Tambor may be the headliner, but he is surrounded by an amazing cast. And it's the way they adjust to the news and come to terms with their own identity issues that makes this series so watchable. The character development is masterful and the performances are, in a word, real.

There is nothing trite about the script. And while you don't have to be trans to appreciate the realness of both the situations and dialogue, as someone who has transitioned, I can tell you first hand that the writing and acting is legit.

The scene where Maura comes out to her oldest daughter, Sarah (played by Amy Landecker), is a perfect example. Sarah is not only dealing with the shock of seeing her father in full make-up, wig and flowing silk caftan, but is also struggling to make sense of what she's just been told. "Are you saying that you're gonna start dressing like a lady all the time?" she asks. Maura sums it up perfectly, stroking her daughter's hair like a mother would do. "No honey, all my life -- my whole life -- I've been dressing up like a man."

The reason Transparent is so spot on? Jill Soloway, the show's creator. She too had a parent come out to her as trans, which is what inspired her to bring this dramady to life. Though not without help from transgender consultants like author Jennifer Finney Boylan, filmmaker Rhys Ernst and artist Zackary Drucker, who also appears in the series as the trans support group facilitator. Soloway casts transgender actors to fill trans roles wherever possible including Alexandra Billings who plays Maura's friend and mentor, Davina, and comedian Ian Harvie who cameos as a professor pursued by Maura's sexually curious daughter, Ali (Gaby Hoffmann).

Even still, Soloway has been criticized for not casting a trans woman to play the role of Maura. As someone who transitioned, I get it. But as an ad guy who has cast over a hundred TV commercials, I also understand the need to go with the best actor for the part. The acting is what's going to make the show work and engage an audience. And with the right talent, it shouldn't matter whether or not the actor is trans. Especially with transgender consultants there to help. Plus, in this particular show, Maura is 68 and just beginning her transition, so realistically, it makes sense that she looks and seems more like a cis man (male born) than a trans woman. Transitioning is an awkward learn-as-you-go process and Tambor's 6'1" gawky frame further accentuates the character's struggle to be comfortable and confident in her femininity and ability to pass. After watching this show, I can't imagine the role of Maura being played by anybody else.

So let's celebrate a series that gets it right. Grab your smart TV remote and order Amazon Prime if you don't already have it. Transparent alone is worth the annual fee-both for it's entertainment value and educational value on the trans topic.