The Motorola Xoom has more memory than the iPad 2. It has a larger and higher-resolution display. And it runs flash. Venerable tech blog Engadget reported that "it outclasses the iPad in many ways."

In a way, the ad was right: Nobody uses a Xoom.

It was a remarkably easy outcome to predict. The Xoom was typical of Apple's competition: feature-packed but unpolished. Noted gadget pundit Jon Geller wrote that "It's almost as if Google decided to try and pack as much in as possible to advance the tablet category forward... I'm not sure it has succeeded." The iPad didn't have quite the feature set, but it didn't matter. As usual, Apple won through design. 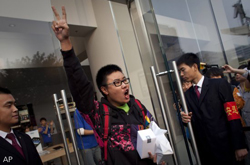 While they do make superior hardware, their secret sauce is interface design. Apple consistently develops interfaces so intuitive that instructions would seem silly. Even toddlers can navigate the iPhone effectively. Their products simply make sense, in a way their competitors seem unable to match. Because of this unique advantage, Apple has achieved their greatest success creating mobile devices, where the interface is psychologically closer to the user.

Since releasing the iPod, Apple has dispatched challengers with Jedi-like ease, brushing aside giants and upstarts alike to become the most valuable tech company in the world. In the meantime, they've built a giant fanbase whose love for the company borders on the religious. The Apple advantage is good taste, and the originator of that taste is CEO Steve Jobs. 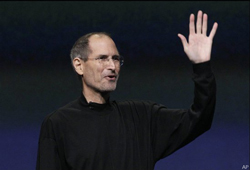 "Apple is the most design-savvy company in the world, and it's because of Steve," says Ray Riley, a former Apple designer. Jobs is a brilliant marketer and the company's visionary. But his most important role is as tastemaker.

Longtime Apple engineer Mike Evangelist was once tasked with heading the design of a DVD burning program for the Mac. His team developed dozens of sophisticated mock-ups and gathered to present them to Jobs. "He picks up a marker and goes over to the whiteboard," remembers Evangelist, "He draws a rectangle. 'Here's the new application,' he says. 'It's got one window. You drag your video into the window. Then you click the button that says BURN. That's it. That's what were going to make.'"

According to Inside Apple, Jobs holds court every Monday, reviewing each product under development at the time. The company's image is also under his constant scrutiny: he once demanded that a slab of Italian marble for Apple's SoHo store be shipped to him first for inspection. He is Apple's filter, personally ensuring that his stringent design standards are met across the board.

But Jobs is suffering from pancreatic cancer and is currently on his third leave of absence since 2004. Ever secretive, he keeps his condition tightly guarded. But he admitted in 2009 that "my health-related issues are more complex than I originally thought."

While Apple has fared well during his leaves, they are not a proper indicator of what the company would be like without him. While off-campus, he continues to exert a huge influence (he remained CEO during his most recent absence), and his legacy is fresh.

His management, even his vision, is replaceable. But that brilliant sense of taste, to which Apple owes their success, will not be matched by the next regime. His death would leave Apple closer to the pack than ever.

When that edge is gone, Apple will no longer be able to operate as they have become accustomed. Without vastly superior products, their arrogant marketing will fall on deaf ears. Consumers will consider alternatives more readily. Their prickly policies towards developers will take a toll.

The company is keenly aware of this weakness, and preparations are well underway. They have even commissioned an all-star team of business professors to write a series of case studies chronicling critical decisions in the life of Apple, hoping to groom young executives who can seamlessly step in were the worst to happen. But in Jobs, they posses the most valuable creative mind in the world. Apple is not just the latest great tech company, it is historically great, and to maintain that level without the irreplaceable taste of Steve Jobs will be impossible.