New data show an unmistakable trend: American women are having more kids. The total fertility rate (TFR) is the number of children a woman will bear over her lifetime if current rates persist. Roughly speaking, averaging about 2.1 children or more is necessary for a population to grow (without taking migration into account). This measure is now at its highest level since 1971, when it was 2.27. In every year since 1971 the number has been below 2.10, until now. The final revision for 2006 births shows a TFR of 2.10.

One thing that doesn't explain the trend is immigration. It is true that Latinas have higher fertility rates than the other major race/ethnic groups, and they are more likely to have larger families. But fertility rates have been rising for Whites and Blacks as well.

Could it be more women having more children, because "three is the new two"? That's part of the story. Third births are at their highest level since 1990, and fourth births are at their highest level since 1980 (as far back as the table goes). But first birth rates - the rate at which women have their first child - also jumped, so that's not the whole story.

Another answer is higher birth rates among teenagers. After 14 straight years of decline, the teen birth rate jumped 3% in 2006 (affecting all groups except Asians). That helped bring down the average age of women having their first child, which dropped for the first time since the CDC started counting (it is now 25 years old). 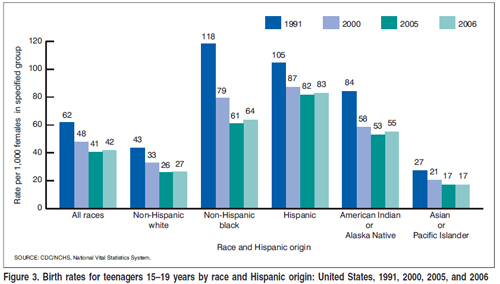 So teen and early births are part of the story. But birth rates increased for women of all ages, so it's not the whole story.

Another answer is single women. The birth rate among unmarried women is up 16% since 2002, and the rate has more than doubled since 1975. That's not just because there are more single women. Unmarried women in every age group (except teenagers) were more likely to have children in 2006 than ever before (at least back to 1970). 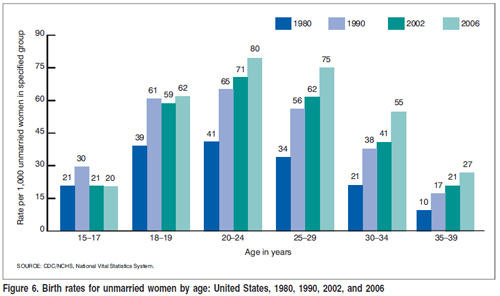 And when you separate out married from unmarried women's births, you see that although fertility rates for both groups are up in the last 10 years or so, it is unmarried women whose rates have increased the most since 1980. 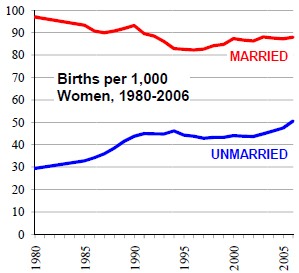 As a result, the fraction of all children born to unmarried women is at its highest level ever, 38.5%, more than double what it was in 1980. (Some of these women are living with unmarried partners, but that's not recorded in these data.)

I have previously written about the stall in progress toward gender equality, which includes more traditional attitudes about gender relations and roles. In light of that trend, this is my suggestion for why we see more children, and more children born to unmarried women:

More Americans are embracing "neo-traditional" attitudes in some respects -- especially by embracing motherhood as a highly prized cultural value, including the so-called intensive parenting. Even if the declining employment rates for women don't reflect general support for "opting out," the cultural elevation of women who choose to stay home with their kids is palpable. This is why we see more 3- and 4-child families in the middle class.

On the other hand, one norm that is not coming back is the taboo against unmarried parenthood. That cat appears to be out of the bag, so that unmarried women are relatively free to pursue their motherhood dreams, as chronicled in recent books about both poor women (Promises I Can Keep) and middle class women (Single by Chance, Mothers by Choice).

All of this means that, rather than being on the "decline," the American family as an institution is on the move, and the diversity of its forms is a hallmark of the current era.