After breaking his leg a few years back, Darryl Partridge found himself with an impossible decision: Live a life of pain or amputate. Two months ago, Darryl chose the latter and is already more mobile than he's been in years. He is also in the process of getting fitted with his very first prosthetic.

Darryl is one of 2 million amputees living in the U.S. right now, yet you will probably never hear his story. You will never celebrate his milestones. You'll never feel his pain. Why? It's quite simple, Darryl is not a dog:

... or a dolphin or a giraffe or a goat or a cat or a donkey or an elephant or a turtle. Darryl is human being. 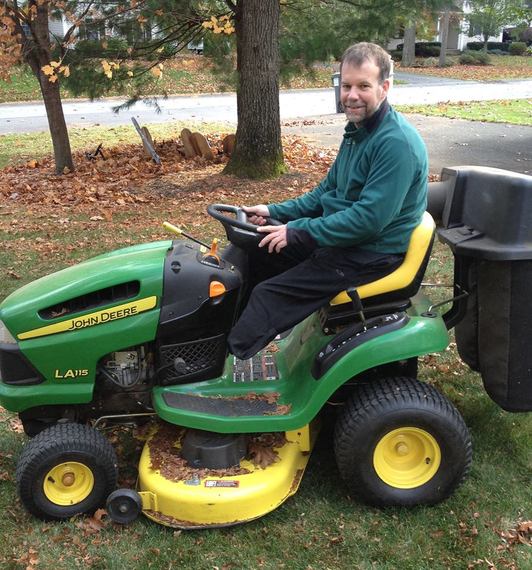 Have you ever noticed how quick we are to celebrate animals with prosthetics when there are so few Upworthy photos and videos of humans in the same situation? I decided to turn to two of my most animal-loving friends to get their thoughts. Robyn has three pups and frequently volunteers at local animal sanctuaries. Sarah has both fostered and adopted many loving pets.

Both Robyn and Sarah felt it must have something to do with the stigmatizing act of staring. I'll let Sarah explain:

I think people know, or have at least been taught at some point, that it's impolite to stare at folks who look different than you. While many people seem to forget this lesson, it's still ingrained in us. But the reason a kid has the inclination to stare at, say, someone using leg braces and crutches, is because it is novel and different.

A recent USC study asked participants to watch both able-bodied and disabled people performing basic activities. Upon viewing the disabled person, participants had an initial flurry of brain activity. But given a little bit of time, those same participants "brain activity quieted to the same levels they displayed when they first watched the fully-functioning person."

The study also showed that brain activity was much higher in participants with the highest measures of natural empathy. This implies that participants use their own body representations to understand people who are different than them.

And isn't this what babies do best? Studies have shown that as quickly as 36 hours after birth, babies begin to mirror their parents facial expressions. And I suppose that's what makes Darryl's recent experience so sweet:

I was sitting down in a restaurant and small boy came up to me and said "excuse me sir, where did your leg go?" It was so unexpected and I had wished I had had the perfect answer, but I didn't so I simply said "it was badly hurt and the doctors had to remove it."

Why was this so unexpected? Because his parents were unaware that he asked me his innocent question. If they had been aware they would have quickly hushed him and embarrassedly removed him. In the meantime if that had actually happened it would been the parents who would have offended me, not the child. The child was treating me as a normal person who had a difference that he was curious about. Where the embarrassed parents action would have showed me I was someone who should be invisible."

Invisibility is a common theme in the lives of disabled people. In a recent post titled "Stroller Shopping vs. Wheelchair Shopping," David LeSeur spoke about his invisibility:

When you're in a wheelchair, people don't talk to you generally. They treat you like you are a child. They talk to the person with you rather than talking to you. Like when walking into a restaurant to be seated, they ask the person with you how many are in the party. Or the check gets brought to someone else at the table instead of you.

Robyn feels that "many people think animals are very different from humans, yet they have the same basic desires and needs that we do. They feel happiness and sadness, and want to live free of harm, just like we do."

And in terms of survival, we can safely assume Robyn is spot on. Animals may not feel things in the way humans feel emotions. We still don't know if those things that we feel (our complex and murky emotions) are innately human. What we do know, is that stuff we describe as emotion is really just our survival circuitry.

Joseph LeDoux, an NYU neuroscientist has observed that "survival functions are not about creating feelings. They are about controlling interactions with environment." So "when we see a cat purring or a dog wagging its tail in joy, we shouldn't expect that it's feeling what we are feeling when we experience joy." That's not to say that animals don't have feelings, it's just that their survival circuits probably do play out differently in animals then they do in humans.

So what is it that we're seeing when we watch a YouTube video of an animal in a prosthetic? I believe that we see the thing that we're taught to look away from as children. Because we're actually not relating to the animals, we're relating the animals to our selves.

You know why people LOVE a dog with prosthetic legs? Because they will never be a dog.

I think we are far more open to seeing the wonder and joy in an animal that is so clearly not like us using prostheses because we are so terrified of our own physical limitations.

The fear of being un-healthy, being differently abled, is pervasive. It's also normalized. I can marvel at a dog without feeling like my own ablebodied-ness (such as it is) is threatened.

This brings about the power of one. Robyn feels that:

... by featuring the journey of one individual animal, it makes it easier for people to relate to them. Think of the news stories we see about farm animals escaping from transport trucks -- a cow on the way to slaughter jumps off a truck and runs through a city, trying to get away. Everyone that sees that story feels for the cow and cheers for her as she runs for her freedom. One individual is easy for us to connect with. We see that one animal as a unique individual and usually want what's best for them.

So today, Darryl gets to be that one. And I had the opportunity to ask him a few questions about what his Upworthy video would feel like. He'd title it "Just Because I Can," which is also the title of his next post. Bon Jovi would be belting "It's My Life" in the background. And the theme? "I wasn't waiting for the prosthetic leg to resume my life. I was out living it." Just like an animal.