The past few weeks have seen a wave of conservative support for "Ban the Box" initiatives, a practice that delays questions on criminal background until after job applicants have had the opportunity to demonstrate qualifications. For the over 70 million people in the United States who are subject to employment discrimination due to criminal history, the change has come none too soon.

"When you go to prison, you are serving your debt to society, but the way the system is set up, that debt continues after you get out," says Steven Manning, a resident of Durham, North Carolina, who served three and a half years in prison for possession of a firearm by a felon. "When companies deny you a job because of what you did in the past, that creates a revolving door back to prison. I can fill out 20 to 30 applications and not get a call back because of my record."

First adopted statewide by Hawaii in 1998 (it didn't expand to other states until 2009), Ban the Box initiatives have long been the domain of blue states and progressive-minded companies concerned with unfair hiring practices and an overburdened criminal justice system. Not so anymore.

Mark Holden, the general counsel for Koch Industries, explained in a media statement:

As a large United States-based manufacturing company that employs 60,000 American workers, we shouldn't be rejecting people at the very start of the hiring process who may otherwise be capable and qualified, and want an opportunity to work hard.

The question is: Why the sudden interest from conservatives? Doesn't this fly in the face of the typical "tough on crime" attitude we normally see out of red states?

Among the tenets of conservatism are beliefs in fiscal responsibility and having a society of productive citizens in which each person works hard to pull his or her own weight. These goals are precisely what Ban the Box accomplishes.

Data from states and counties that have implemented Ban the Box (currently 16 states and over 100 cities and counties) demonstrates some remarkable results. When employers delay backgrounds checks until after applicants have demonstrated qualifications, thereby lessening the possibility that people with a criminal history (however outdated or irrelevant) will be automatically rejected for jobs, then more formerly incarcerated people get a chance at stable employment. Stable employment means more tax revenue for governments, fewer citizens reliant on charity or subsidies, lower expenditures on prisons and jails, and less crime. For the individuals affected, a steady income means the ability to provide for self and family, a greater sense of pride and purpose, and low incentives to reoffend.

This chart from Durham, North Carolina, shows that since implementing Ban the Box in 2011, city hiring of people with criminal records has increased seven-fold -- without a single negative workplace incident as a result. 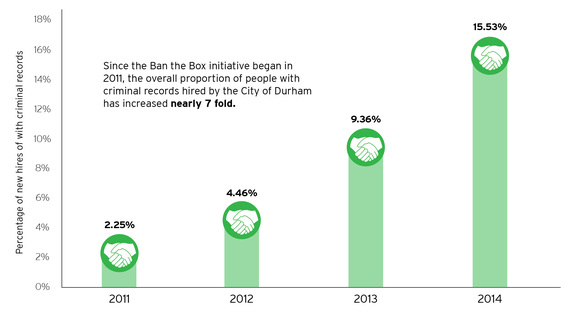 The second chart, from Durham county, demonstrates that each year, only one to four applicants with criminal records were turned down for a job once the background check was completed. This is important to note, as one common argument against Ban the Box is that it wastes employers' time by forcing them to go through the hiring process with applicants who will ultimately be denied. But evidence from states and municipalities that have implemented Ban the Box show that this is rarely the case; most applicants with a criminal record are ultimately hired even after the employer learns their background. 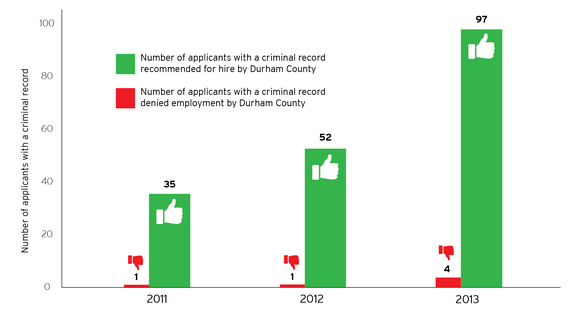 In fact, Ban the Box policies benefit employers enormously, as noted in Georgia, whose executive order for Ban the Box reads:

Ban the Box hiring practices enhance Georgia's reputation as the number one state in which to do business by increasing qualified applicant pools and improving the likelihood that the employer will identify the best candidate for the position.

Virginia also recognized the benefits of Ban the Box not only for individuals with criminal records but for society at large. Virginia's executive order, signed April 3, 2015, reads:

Expanding employment opportunities not only improves the Commonwealth's fiscal health, but also enhances the quality of life for all of her citizens by providing improved access to better housing, education and other societal benefits.

Ban the Box is just one of a burgeoning number of criminal justice issues where conservatives and liberals are beginning to align. Though tenuous at times, these alliances are a welcome change for those of us who are tired of partisan bickering and ready for positive change. It's not only people like Steven Manning who benefit from second chances but all of us as employers, taxpayers, and neighbors.