(This blog is co-authored by Werner Schultink, UNICEF's Chief of Nutrition) 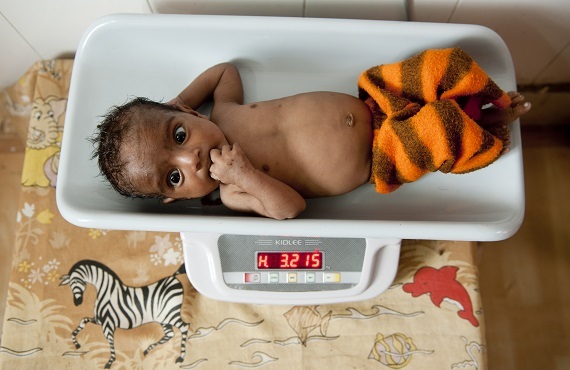 5 month old Manish, at a Nutrition Rehabilitation Centre, Guna, Madhya Pradesh. In 2013 when this picture was taken, Madhya Pradesh alone had 5% of all open defecators in the world, and 50% of children under 3 were stunted.

A story on the high incidence of malnutrition among children in India reminded us of a curious phenomenon that for years had puzzled development and health professionals. Despite India's growing economic power and successive governments who paid serious attention to increasing food supply, children in that country remained smaller than those in less well-off countries in sub-Saharan Africa.

It took years of research and large-scale case studies - some of which were published by UNICEF, USAID and WHO in Improving Nutrition Outcomes with Better Water, Sanitation and Hygiene - to pin it down. There is a very widespread lack of adequate and diverse food intake among young children, which needs to be addressed, in both India and poor countries in sub-Saharan Africa. However, in India there is an additional and unexpected villain in the piece: a lack of toilets.

Open defecation has been a problem for a very long time in India. So common was the practice that almost 100 years ago Mahatma Gandhi urged his compatriots to stop it. It remains widespread to this day, practiced by 44% of the population in 2015. This runs to 569 million people, the highest number of people practicing open defecation of any country in the world. In part it is due to a lack of facilities, but not entirely. Significant numbers of Indians with toilets at home still defecate in the open.

What does open defecation in India have to do with the size of its children?

There is open defecation in sub-Saharan Africa. Of the 700 million people in the region who do not have proper toilets around 230 million defecate in the open. What is different in India is the pervasiveness and the concentration of the practice.

In India, a child is surrounded by feces. It is where babies crawl; where children play; where they eat; in the water they drink and bathe. It gets into their mouths; they ingest it from their own unwashed hands as well as those of their care-givers. And when it gets inside it does some very dirty work. 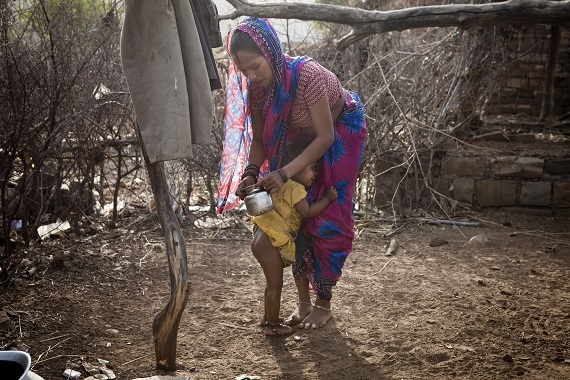 Mother washes child in Bhilkhera Dang, Baran District, Rajasthan, 2014. Between 50% and 60% of deaths of children in the state have been attributed to malnutrition.

Feces carry bacteria that in young children especially can lead to multiple episodes of diarrhea every year. Not only do these episodes prevent the retention of nutrients from food, we now know that they permanently alter the absorptive capacity of a child's guts, by lessening the number of the villi on intestinal walls which are meant to trap nutrients.

What is the result? A stunted child.

Stunting means children are not growing as they should, they are short and small for their age, and they can have permanent cognitive damage. That has implications on a country's economy. Stunted children grow up to be weaker and more susceptible to illness, bringing an extra burden to the public purse. They do less well in school, so they earn less as adults. The ramifications are far reaching.

In India 4 out of 10 children under 5 years old are stunted. And around the world, 159 million children are stunted. 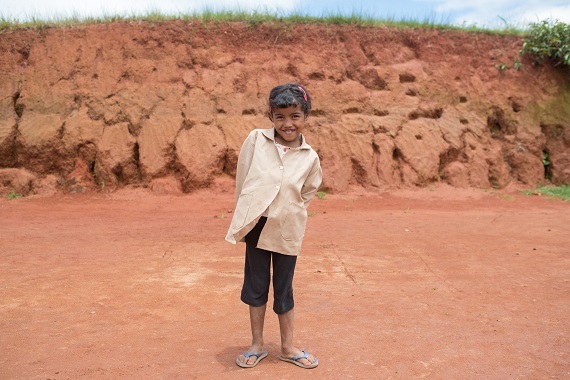 India might have numerically the biggest problem, but unless the world wakes up and does something about sanitation, the problem could grow.

In sub-Saharan Africa the number of people who defecate in the open is growing. Countries in the region have been scrambling to keep up with a population which has very nearly doubled between 1990 and 2015. The urban population, in fact has almost tripled, and services have not kept pace.

We do know that when political will, outside intervention, and - crucially - community involvement combine, excellent results are possible.

In conflict-affected Democratic Republic of the Congo, displaced communities were given both extra nutrition and help with improving water, sanitation and hygiene. Waterborne diseases fell dramatically in children under 5, and some 90 per cent of malnourished children returned to normal weight during a 12-month period.

It is 2016. We know what to do and we know how to do it. India's children, and all children around the world, deserve a chance to grow tall and strong and live healthy and productive lives.