As our friend, Gloria Yeatman, says: "Most of us can't afford to retire in the U.S. anymore. Besides, there's just a lack of civility in general in the U.S. these days, especially when it comes to how older people are treated."

Paul and Gloria's story may be similar to yours or that of someone you know.

Paul is 10 years older than Gloria; they met and married later in life. In 2008, when Paul started thinking about retiring, he didn't want Gloria to have to wait until she reached official retirement age.

But they were worried they didn't have enough money saved. They were afraid that the home they owned in Baltimore, which they hoped to rent out, wouldn't hold its value. They wondered if their IRAs would ever rebound.

Most of all, they worried about how they would be able to afford health care if they stopped working. (They'd be facing health insurance premiums of at least $1,000 a month.) What could they do, they wondered, and where could they go where their money might go further?

So Paul and Gloria carefully considered their options.

Sure, they could downsize. Sell the house and everything else. They thought about moving to the southeastern United States. But what would they do about health insurance? Paying high premiums and out-of-pocket expenses for medications and doctor's visits was not an option.

It would be several years before Gloria was eligible for Social Security and both were too young for Medicare. If there was no money coming in, they'd burn through their retirement savings in no time. And then what would they do? 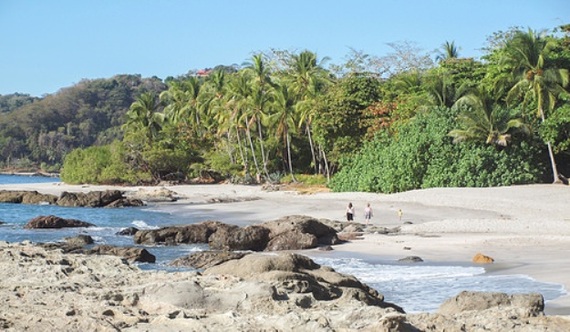 So they chose another option. They chose to do what millions of Americans and Canadians are doing. They retired overseas -- to Costa Rica, where the weather is better and the cost of living is lower. And a top-notch and efficient health plan ensures that all citizens and legal residents -- including foreign residents -- have dependable and low-cost access to health care.

"We wanted to live in another culture, a Latin culture, and to speak Spanish... to broaden our perspective, to experience the fact that the rest of the world does not necessarily think, live, or make the same choices as we do in the United States," Gloria says. "We wanted to live less expensively, and that definitely includes affordable health care. We could afford to stop working full-time and create a new life for ourselves and have more time to enjoy being together while we are both healthy."

So Paul and Gloria packed up and moved to Costa Rica where, as legal residents, they've joined and made use of the national health care system. Instead of spending $1,000 a month for health insurance with a high deductible, they pay just $55 a month (total for the both of them) for a full-coverage health plan with no deductible at all, through Costa Rica's national health system. They're saving $11,340 per year in health insurance costs alone.

"There is an incredible freedom knowing that you have affordable health care coverage and that you don't have to fear losing everything if you get sick," Paul says. "We had high hopes for the health care here in Costa Rica and we haven't been disappointed. We are saving money, yes, but we have also found the quality of health care here more than adequate, and in some areas, excellent."

Best of all, they say, it never snows in Costa Rica. In fact, the climate is so perfect that they don't need heat or air conditioning.

And you can easily do the same.

In fact, millions of American, Canadian, and European retirees have learned what Paul and Gloria have. Moving just a few hours by plane from where you live now can save you tens of thousands of dollars every year, and may mean you can finally afford and/or greatly reduce your health care costs. And living in a more welcoming climate may not only improve your overall quality of life, but also can actually improve your health.

In many cases, retiring overseas may mean the difference between working for another 10 years or more or retiring now.

Are you with us so far? What you've just read is the beginning idea of a book we've just written in partnership with Wiley Publishing. It's called The International Living Guide to Retiring Overseas on a Budget. In it, we offer all the details you'll need if you're considering an overseas retirement, including the world's best retirement destinations.... not just countries, but specific communities where you'll be welcomed immediately.

You'll be happy to learn that the tough issues you face in retirement: health care, housing costs, property taxes and insurance, and yes, daily living costs, can be easily managed in the right overseas locations. Retiring overseas is an idea that's worth pursuing for anyone who is the slightest bit adventurous and, importantly, who is not willing to let go of their retirement dreams. Learn more here.

Related Articles:
Enjoy the California Lifestyle - for Less - in Coronado, Panama
How the Seymours Retired at 41 and 44 in Costa Rica
Perfect Weather in the Heart of the Central Valley, Costa Rica