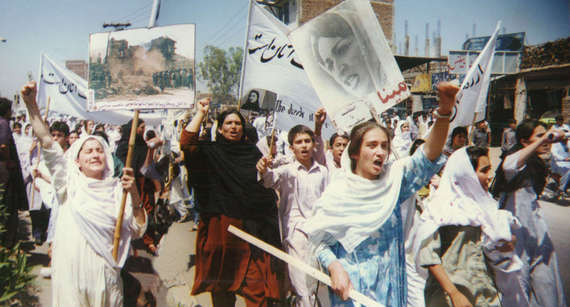 The Council of Islamic Ideology (CII), the official constitutional body that advises the government on all matters related to religious affairs in Pakistan, recently criticized a bill that criminalizes violence against women as "un-Islamic."

The Women's Protection Act, which honestly was not all that ground-breaking in its content, gave legal protection to women from domestic, psychological, and sexual violence. It also called for emergency helplines and more women's shelters to be set up.

This radical idea had religious organizations seriously upset. Fazlur Rehman, the chief of one of Pakistan's largest religious parties, the Jamiat-i-Ulema Islam, claimed that this law "makes a man insecure" and that it "is an attempt to make Pakistan a Western colony again."

Yes, because physically and mentally abusing another human being without fear of the law is what really defines our nationalism.

The CII have decided to take matters into their own hands and write their own "women protection bill," which, by the way, was debated by an all-male panel since the only woman in the CII, Dr. Sameeha Raheel Qazi, decided to be absent (I'm sure whatever she was doing instead was more important than the rights of Pakistani women).

These are just some of the ways in which the CII proposes to "protect" women in Pakistan:

Do you feel protected yet?

Removing a woman's agency over her own body and reducing her to a mere tool is a central factor in Islamist propaganda that pushes misogynistic and sexist interpretations of the Qur'an over moderate and liberal ones.

To illustrate, the practice of domestic violence is most often justified by the words found in Surah Al-Nisa (The Women), verse 4:34:

"As to those women on whose part ye fear discord, admonish them first, then refuse to share their beds, and finally [adriboo] them; but when they comply with you, then seek not against them means of annoyance: For Allah is Most High, great above you all."

The Arabic word "adriboo" has a variety of meanings such as "to beat" but also: "to forsake, to avoid, to leave." It therefore gives way to those who wish to contort and utilize the Islamic faith as a means to control and intimidate women.

This same instance of drastically different interpretations is found throughout the Qur'an, making it increasingly difficult for reformists to challenge extremist ideas.

The conditioning of women is vital to the Islamist propaganda because it silences an entire section of society that could otherwise potentially create problems in a misogynistic utopia.

This new proposal will seem ridiculous and unsubstantial to many, and is more than likely to be rubbished after an initial reading in the Punjab Assembly where it is set to be propositioned soon. Yet this bill is no joke.

The fact that this is the state of the official constitutional body that advises the government on religious matters is extremely disturbing and requires serious scrutiny.

How are these people, who hold the belief that it is acceptable to physically harm another human being for not wanting to sleep with them, elected to this position? What are their qualifications? What makes them worthy of making decisions on my behalf? And how much do they really understand the Islam they claim to represent?

The human rights of Pakistani women are not up for debate. Their bodies are not at your mercy, their minds are not yours to condition, and they certainly do not require the CII to tell them how to speak or when to shower.

British Muslim, born in the United Arab Emirates with a special interest in progressive Islamic reform