Why is food so expensive in theatres?: originally appeared on Quora: The best answer to any question. Ask a question, get a great answer. Learn from experts and access insider knowledge. You can follow Quora on Twitter, Facebook, and Google+. 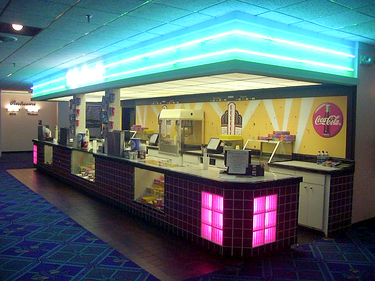 Let's get one thing out of the way. Theaters do not necessarily make most of their money on concessions nor do they keep virtually no part of the ticket sales.

Read the statements for Carmike, Cinemark, or Regal and you will find similar results.

So that myth doubtless spawned by the belief that studios take some 90% of the ticket price? Mark it busted.

A little history may be in order...

Film deals with theatres were at one point (some 40 years ago) subject to a negotiation after the film had run its course in a theatre. At some point, distribution figured out that it could collect more by shifting to a policy wherein terms were set before the film played and not negotiated post play off. Ostensibly, the deals were based on an expectation of the film's performance. Naturally this was not always predictable.

Terms of the deal were typically based on a declining scale of returns to the distributor. For example, the studio might take 70% of the gross the first week, 60% the second week, 50% the third week etc.

At some point a clever distributor came up with the 90-10 formula which could mitigate (in a positive way for film companies) the surprise hit. They negotiated an allowance with the theatre owner of a set amount that was deducted from the gross of a film for the week. The film cost was then calculated on the basis of 90% of the adjusted gross (Gross - allowance) and compared with a minimum deal for the week.

For example, if the allowance was 2500 and the film grossed 10,000 and the minimum weekly terms were 70%, the calculation would go as follows:

Eventually, distribution patterns changed and more and more theatres were taken on the initial release of a film. This front loaded the box office toward the earlier weeks of release and made the old formulas for calculating rentals punitive for theatre owners.

Deals then shifted to what is more or less currently in place, wherein the final rental for a film is generally based on an aggregate percentage for the run of a film that is determined by a fixed scale of domestic box office. So if a film grosses maybe $100 million in North America, one might pay 55%. If it reached $200 million the deal might be 60%. Most distributor/exhibitor splits are now determined at basis this way.

Now as to why they charge so much for food and beverage?

Mostly because they can and most people do not hesitate to pay it. Note, I say most people. Certainly some don't and some are put off by high concession prices, but the calculus is that on balance less revenue is lost on those who don't buy because of high pricing than is gained.

This isn't just a blind shot at the bulls eye. Theatres, especially large theatre chains, test these things and analyze the crap out of them. So the point is that it makes them more money than would be spent otherwise.

Just for fun though, if you think concession prices at theatres are high, go buy a beer at your favorite NFL, MLB, NBA team's concession stands and see how they compare. Six dollar, twelve ounce Coors Lites were not uncommon even ten years ago. Fill your market test basket and then go to your local theatre, even a high priced one, and see who comes out on the bottom.