The reports that 4,000 FAA employees and up to 70,000 airport construction workers narrowly escaped being laid off until Labor Day because Congress went on vacation is unbelievably true. And this is the height of the vacation travel season.

In this case, Senate Majority Leader Harry Reid had to scotch together a last minute compromise after Republican Senator Orrin Hatch scotched an earlier compromise of the House bill negotiated by Senators Rockefeller and Kay Bailey Hutchinson that would have cut spending on rural airport subsidies, according to the New York Times.

In fact, such actions are putting into question the motives for Republicans' opposition to any kind of stimulus spending to spur economic growth. Republicans have once again brought us ever closer to another recession by imposing their anti-government, anti-union agenda.

What else should we think? In fact, we just had the 30th anniversary of President Reagan's firing of 11,000 striking Air Traffic Controllers that Governor Scott Walker has been holding up as his model for banning collective bargaining of public employees in Wisconsin. (Though that may soon be reversed with next week's Wisconsin recall elections.)

The only problem is that Reagan wasn't against collective union bargaining, according to Associate Professor Joseph A. McCartin of Georgetown University, author of a forthcoming book, Collision Course: Ronald Reagan, the Air Traffic Controllers, and the Strike That Changed America. And it exposes Scott Walker's total disregard of both history and the truth.

"Although he opposed government strikes, Reagan supported government workers' efforts to unionize and bargain collectively'" said Professor McCartin. "As governor, he extended such rights in California. As president he was prepared to do the same. Not only did he court and win Patco's endorsement (the Traffic Controllers union), he directed his negotiators to go beyond his legal authority to offer controllers a pay raise before their strike -- the first time a president had ever offered so much to a federal employees' union."

How close are we to a double-dip recession? The latest revisions to Q1 and Q2 2011 Gross Domestic Product growth show that consumer spending has shrunk -- mostly from a lack of confidence in the future, and household debt that is still too high. This is while Thursday's DOW Jones Index plunged 512 points -- due to fears of another recession. So this is not the time for Republicans to be playing with fire.

It is why GDP growth has slowed so drastically. There are four indicators used by the National Bureau of Economic Research Business Dating Committee to determine a recession -- employment, personal income less transfer payments, real GDP growth, and industrial production, as we have said. Of the four, industrial production and GDP growth have been recovering since mid-2009. But they are really dependent on employment and personal incomes less transfer payments, which haven't done so well. Personal incomes have improved for those who are employed, but the money is either being saved or used to pay down debts. 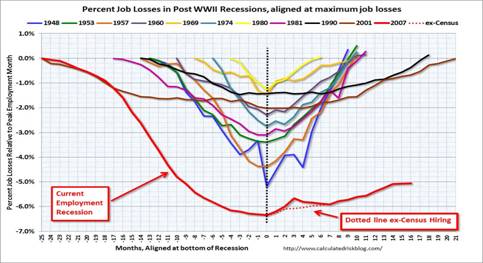 And employers are not hiring enough workers to keep up with population growth. So there is really no excuse for such ideological blindness that opposes any kind of government action to stimulate growth, unless it is intentional. In other words, would they use another economic collapse to try to knock out Obama in 2012? It is a horrific thought, if so. They should keep in mind that the Blame Game can work in unexpected ways. It could forfeit their chances of winning anything.