It's fairly common knowledge that the Dutch are some of the tallest people in the world. Whereas the average American man measures in at about 5'9" (176 cm), the average Dutch man stands at well over 6' (185 cm) tall. What is it about this small, traditionally seafaring nation that breeds such extraordinarily tall people? Contrary to popular belief, it's not to keep their heads above water.

To provide a historical perspective, I charted the median male height for various countries between 1820 and 2013 below. It was surprisingly difficult to find this kind of height data, but fortunately many of these country's militaries meticulously recorded the median height of their new conscripts every year. These records provide a convenient (albeit somewhat biased) sample of the young generation of men during the time period.

The raw data for this chart is available on figshare here. You'll notice that there's several holes in the data set, which I simply extrapolated the trends over. I compiled this data set from half a dozen different sources, so if you plan to use this data set for any of your research, I strongly suggest double-checking the sources I list there. 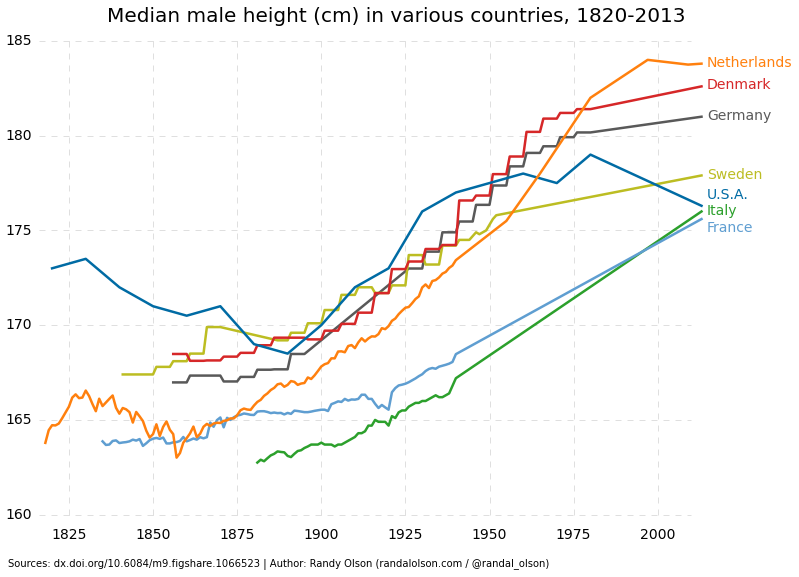 The most surprising revelation here is that the Dutch became the tallest Europeans only recently in the 1980s. Before then, they were one of the shortest people in Europe at only 5'5″ (165 cm) for first half of the 19th century. What changed after 1850 that led to this explosive Dutch growth? Prof. Drukker at the University of Groningen suggests that it has a lot to do with the distribution of wealth. As Cecily Layzell writes:

The Dutch growth spurt of the mid-19th century coincided with the establishment of the first liberal democracy. Before this time, [The Netherlands] had grown rich off its colonies but the wealth had stayed in the hands of the elite. After this time, the wealth began to trickle down to all levels of society, the average income went up and so did the height.

This explanation makes intuitive sense: It's well-known that we're much taller than our ancestors 100 years ago because of improved nutrition, especially in our adolescent years. If the average citizen has more money to buy healthy food, then we would expect their children to grow bigger, stronger, and taller. To add more evidence to the pile: GapMinder clearly shows that the Dutch income per capita stagnated until the mid-late 19th century, right when the Dutch median height started rising as well. 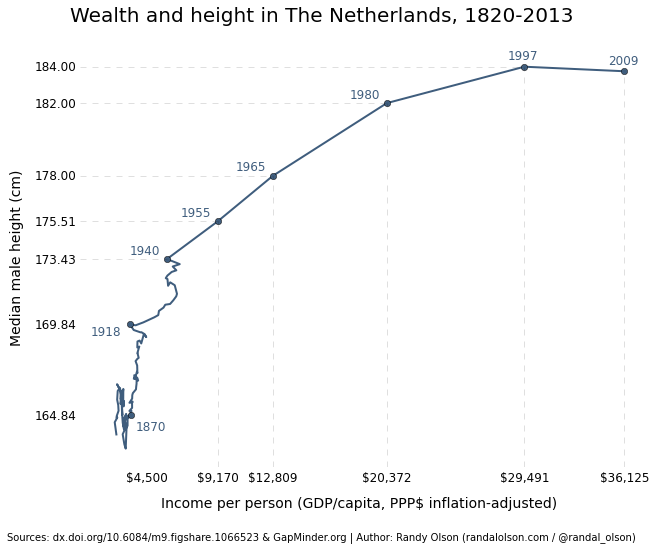 So, there we have it. Make sure all of our citizens are wealthy enough to buy healthy food and their children will grow up to be bigger, stronger, and healthier. It's not as fun an answer as we would've hoped for, but at least we can put this "head above water" theory to rest!

Note: Several of my readers have rightly pointed out that although this data explains why many Europeans have grown taller in the past 150 years, it doesn't necessarily explain why the Dutch are so much taller than the rest of Europe. There are a couple possibilities that merit further investigation: